We took the train from Paris to Amsterdam, and I found myself recounting something our friend, Larry Gibbs told us recently. He said, "The United States made a grave mistake after World War II. They built roads instead of rails." ...and what a difference it has made. Of course we have railroads in the U.S. My father commuted into New York City every day, and I used the train to go from San Francisco to Palo Alto when I taught at Castilleja. The commuter trains are alive and well. But if I were thinking of going to Seattle, Chicago, New York, I would either fly or drive. Anyone taking Amtrak is usually doing so for the fun experience of riding a train, not because it is a real viable option of transportation. As a matter of fact, anyone coming to San Franciso on the train has to stop in Oakland and be bussed in to the city because there is no station. On the other hand, One can drive from Washington D.C. to Washington State, and see a cloned highway with McDonalds, KFC, Burger King and Applebees dotting the countryside from coast to coast. The only thing that changes is the content of the radio stations.
Rail travel in Europe is phenomenal. When we went on our tour bus in Paris they went by these huge buildings that I thought must be part of the Royal line in some way, but then I come to find out that they are railway stations: 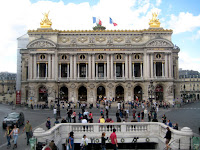 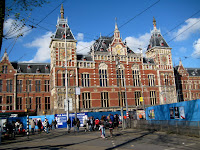 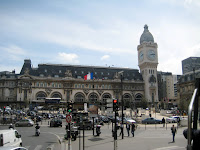 The Gare du Nord is the largest train station in all of Europe. (The pictures above are The Gare du Lyon and The Gare du Nord in Paris, and the Amsterdam Central Rail station.) Rail travel is so easy and so well organized and so comfortable and so fast- it's just a no-brainer that one would take the train to get from any European city to another. 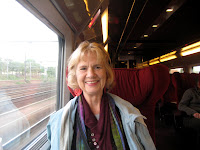 We were served an incredible lunch with wine, and we passed some beautiful countryside as we went from France to Belgium and then into Holland.

We arrived in Amsterdam around 4:00 this afternoon, and right away I am noticing what a different kind of city this is. If Paris is the royal throne of Europe, Amsterdam is the comfortable couch in the den! Paris is regal, refined, and built on a huge scale. I kept asking myself how in the world Catherine de Medici lived in the Louvre. What did she do with all those rooms? Or when visiting the Hotel de Sully, (remember "Hotel" means the huge house), I marveled at the fact that a single family lived in a house with over 50 rooms. Now that I'm in Amsterdam, I keep asking myself, how does a family fit in to these tiny places. Think small and then cinch it in by half! When we arrived at our hotel, I had to laugh when I saw the stairs. 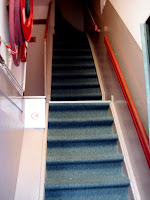 We are on the third floor- it was quite a site bringing up our luggage. Loren has a slight fear of heights, and these steps are almost vertical. I tried to make him feel better by telling him that there is another floor above us! I think we may just have to go out in the morning and return at the end of the day so we're only going up and down once a day!

Smart Cars are all over in Paris, but I saw the smallest Smart Car 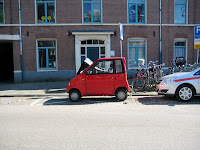 ever here in Amsterdam. It was as if they had sawed off the end.

Amsterdam is a city of canals, so everything has to economize space. Perhaps that is why the bicycle has such an enormous popularity. There are bikes everywhere, and they certainly seem in command. I nearly collided with one 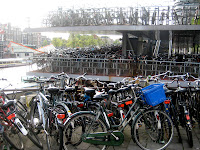 that was "ding, ding, dinging" his bell at me. My genes 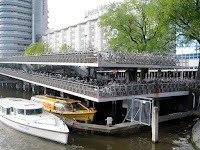 just are not wired to be attentive to such little bicycle bells- but these guys are serious!... and plentiful! 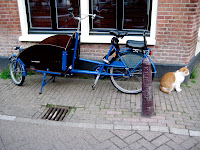 We saw a woman peddling her bike which was carrying her four dogs. Babies, lovers and groceries are all accomodated somehow. 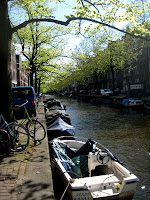 The other thing that is plentiful is boats- all sizes, shapes and uses, and it is such fun to "boat watch" as they navigate along the winding passages and through narrow archways and low bridges. I didn't get the feeling that the boats were used for transportation since there wa 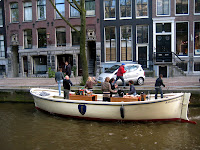 It was the Queen's birthday yesterday, so they may have still been celebrating. Since we didn't get a chance to go on the Seine when we were in Paris, we are definitely going to try to get on the canals in Amsterdam, so I'll tell you more about it later.


Since my last blog was about Parisian food (and yes, I did get to have my mussels in France) 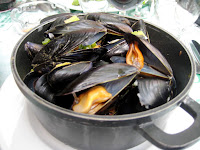 I was eager to see what Amsterdam had to offer. Well, when you think of the Dutch, what food comes to mind...??? Exactly, nothing! We dropped in to a bar/restaurant this afternoon. There were some wonderful draft beers to choose from, but the menu left a bit to be desired. 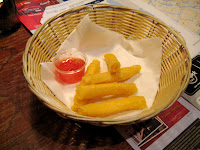 We settled on some fried cheese sticks, thinking that would be a nice snack with our beer. They came in a basket- about 5 sticks that looked like French fries, tasted like nothing in particular, and came with a kind of Chinese sweet and sour sauce. Very odd! For dinner tonight, we tried to find an authentic Amsterdam restaurant, but discovered there really is no such thing. There were lots of Indonesian restaurants, a Mexican restaurant, a Tapas restaurant, and an Argentinian restaurant. We settled on the latter, and had a fun meal replete with an Argentinian guitarist singing the Brazilian song, "Guantanamera!"

Well that's it for now - our first day in Amsterdam. It's been a long day and we're going to say good night.
Posted by nanwebware at 1:29 PM