Because it happend once...

"It happened, therefore it can happen again: this is the core of what we have to say." Primo Levi
Today we went to the Holocaust Memorial and Museum in Berlin. I think this might be the only memorial honoring the loss of life built by the very people who took those lives. It is called "The Memorial to the Murdered Jews of Europe" and it was amazing. 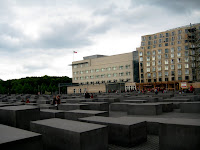 The Memorial is just down from the Brandenburg Gate with the U. S. Embassy just across the street. 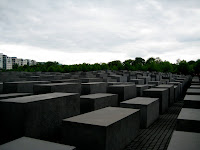 It is a maze of concrete 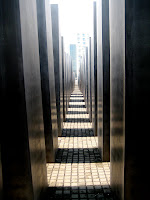 monoliths of different heights with pathways sloping and rising along the way. The memorial was designed by an American architect,Peter Eisenman. In the brochure it says, "This design represents a radical approach to the traditional concept of a memorial, partly because he does not use any symbolism. The grid pattern, consisting of 2,711 concrete stelae, which can be walked through from all sides, leaves it up to visitors to find their own way in and out of the complex."

And, indeed, there was an older couple seated on one of the blocks having a picnic, 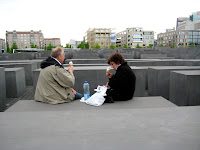 young children shrieked with glee as they played hide-and-seek among the blocks; most walked silently and reverently through the maze. 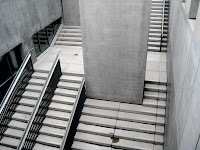 After wending our way through the maze, we found a stairway in the southwest corner that led downstairs to an underground museum. We had to go through security, much like the airport security: taking off our coats, putting our purses and backpacks in a basket, etc... We decided to take the hour long audio tour, and it was the most amazing audio tour I have ever encountered. The underground museum was awesome. Looking up at the ceiling, you could see the above-ground monoliths reflected, including the slope of the pathways. The first thing we encountered was Primo Levi's quotation. Primo Levi was an Italian Jew who survived Auschwitz and wrote a very powerful account of his experience. We were led through a time line of the persecution of the Jew from 1931-1945. In 1931 Jews were forbidden to shop in certain areas; later they were demanded to wear a yellow star on their clothing to mark them as "special citizens." At that point I asked myself, "Where was the resistance?" What if citizens said, "NO!" at this point? But then, there had been anti-Semitism throughout the history of man. Did that make it easier to accept? "It happened, therefore it can happen again..." Don't we have opportunities daily to speak up and say, "NO?" before the intolerance is able to get to the magnitude of the inhumane atrocities found in1945? 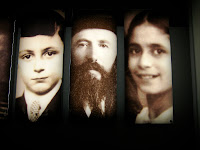 This question remains with me, as I continue with my audio tour. We're taken in to the "Room of Dimensions," a dark room only lit up from glass panels in the floor displaying personal accounts of men, women, and children during the persecution. One account is written by an eleven year old girl waiting to be executed. She scrawls a note to her father saying good bye and throws it on the ground. It was picked up by a German soldier and somehow saved. Looking up, there is a tape going around the room all along the top of the walls stating the number of victims in the occupied countries: Germany: 150,600; Poland: 3,000,000 - 3,360,000 ...etc 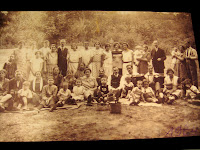 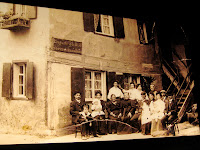 After the "Room of Dimensions," we walk in to the "Room of Families."
Here we meet fifteen different families from all across Europe. We see them with their children, family portraits, family outings.

Then we learn what happened to them. 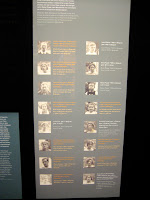 In a vertical column, each person represented in the larger family portrait is represented with their fates. If it is written in orange, it means they did not survive. I was struck by the diversity of these people, and found myself continually asking, "If only this man could have lived; what if this child were alive today?" The destruction of not only individuals, but such rich and diverse cultures was horrible to consider. Doctors, chemists, artists; Hungarians, Poles, Russians; so many good lives taken.

The next room was very powerful. I learned from my tape that it is part of the Jewish religion for families to honor and recognize those who have died. After WWII, this could no longer be left up to individual families, because many whole families were wiped out. So there is now a "Book of Names" 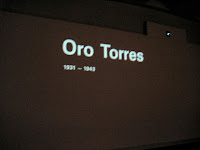 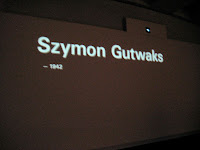 with more than three million entries. In the "Room of Names" there were several concrete slabs where visitors could sit. The name of one person appeared simultaneously on all four walls with the date of birth if it were known, and the date of death. A voice announced the name and told a short biography of that person ending in when that person died. It was first spoken in German and then in English. The name then dimmed until it could not be seen and a new name appeared on all four walls. My brochure said that reading out the names and biographies of all the victims would take approximately six years, seven months and twenty-seven days!

The next room was "The Room of Sites" 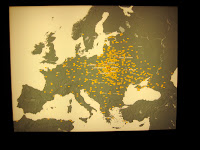 which documents the actual geographic sites where European Jews were persecuted and exterminated. Whereas in the "Room of Families" I was struck by the individuals and each of their stories, the "Room of Sites" forced me to see the enormity of the scale of this horrific mass extermination. Two hundred and twenty sites were presented on a map of Europe, and that wasn't all of them! My audio tour said, "If all the sites were presented on the map, it would be completely orange."

Both Loren and I left the museum numb. We took the bus home, and walked to the BierGarten in the People's Park across from Haden's place to talk about it. 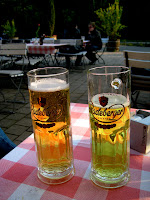 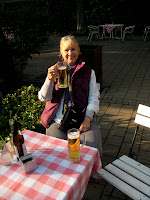 What would we have done had we been living in Germany, Poland, Hungary, Italy during the time when innocent people were being taken away? That's a hypothetical question. But more importantly, what do we do each day to counter racism, discrimination, and prejudice which exists all around us? Do we recognize it? Do we take action against it? We must; everyone of us must say, "NO," whenever we see it.

"It happened, therefore it can happen again: this is the core of what we have to say." Primo Levi
Posted by nanwebware at 4:31 PM