We got off to a bit of a late start Thursday, piling into the car at 10:30 with two dogs, three toothbrushes, and a change of underwear for each of us, but we didn't think much of it as Haden had told us it was a three hour drive to Heidelberg, and we could go on to Rothenberg in the afternoon to explore Loren's ancestral land. When we got into the car and plugged in Heidelberg, the GPS "Lexus Lady" told us it was a six and a half hour trip! What!? We were stunned for a short while as we looked at each other; I asked Haden, who would be the only driver, "Should we go?"

Turning on the ignition he said, "Let's do it. I'm up for a long road trip!"
It was about 40 minutes later when I knew immediately that we were on the infamous Autobahn because the speed increased ten fold. Let me explain. The autobahn for the most part has three lanes going in one direction. The far right hand lane is for those who want to drive between 110-130 kilometers/hour. The middle lane is for those who drive between 130-150. The far right lane is for anyone who wants to drives faster than that. Haden kept to the middle lane for most of the trip, except for the occasional rocket boost to the left just to give me my thrills. The weird thing is, Haden would be driving in the middle lane going around 160, and out of the blue a car would rocket past us on the left- doing at least 200!! The most incredible thing is that I soon got used to it all, and 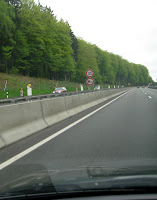 it worked quite well! They do have speed signs. If there is a 150 with white around it is the recommended speed- but you can certainly go faster if you like. If there is construction or a need to slow down, then the speed limit has a red circle around it. This picture says speed limit 120 because we were going from a three lane highway to a two! And on cue, everyone slowed down!

I should mention that Thursday was a holiday which means that NO trucks are allowed on the roads!!! The only exception are those carrying perishable goods. So we saw large lots of trucks just parked in rest areas all along the Autobahn. (We later found out that the holiday was Father's Day- which I found odd seeing as it was a Thursday- but maybe that makes sense- Fathers should get a day off from work!) 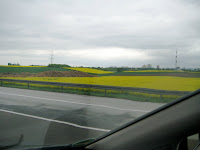 Do you remember I was so impressed with all the beautiful mustard fields we passed on our train ride from Paris to Amsterdam. Well, we passed field and fields again- but I discovered it is not mustard... it is rape seed used to make Safola Oil and something you can put in your car as a kind of gasoline. It was all over the place. 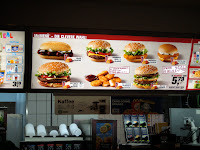 Our first stop was McDonalds! That's right; Haden said, "I'm craving fast food, would you mind if I had a big Mac!" What could we say? While Haden tended to some business calls and the dogs, Loren and I went in to order. This was actually our second McDonalds that we stopped at - the first was so crowded, we didn't want to wait in line. This second one was quite crowded as well. I was amazed to see how popular it was - it could have something to do with Father's Day??

So we give the girl our order - she speaks no English, but I didn't think it mattered as all we had to do was order A Big Mac Menu, A McChicken Menu and and McChicken without the Menu. (Menu just means you get a drink and french fries.) So she asks if we want coke? So I said, "One coke, one root beer, and a bottle of water."
"Eine bier?" she asks.
"Yes, danka."So then she gives us two cokes, a water and a bottle of beer!! BEER in McDonalds! Only in Germany. "No, No, No bier!"
"No Bier?"
"Nein."
So she puts the beer back in the case, packs up our things and says, "Bitta."
Loren says, "The beer?""Eine bier?" she asks.
"No! But do...we...get...any...money...back?"
"Ah, no is egale" 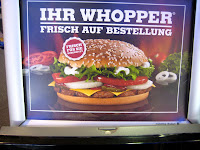 I think she was saying it's the same- whether we had the beer or not- we surmised that we might have gotten three menus and that you could have a coke or a beer as your drink of choice- no difference!! I am also including a picture of a sign at the Burger King we hit on the way home. I love the mixture of German and English together!

Our drive took us past Frankfurt with its surprising skyline of skyscrapers, and then actually into the city of Heidelberg which looked charming with its cobblestone narrow streets and old buildings. Heidelberg was not bombed. One theory states that the Americans put it off limits because they planned to use the city as a staging area when they advanced into Germany. And indeed, there are American forces in Heidelberg even today. Another theory is that Heidelberg is nestled in a valley that made bombing more difficult. We went to Heidelberg for lunch on Friday, so I'll say more about it later. 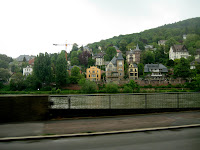 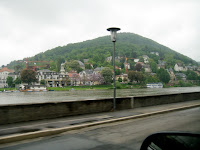 After Heidelberg, we crossed the Neckar River and passed some quaint, little German towns many of which had 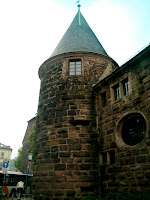 castles perched on the hills above.

Nineteen kilometers north of Heidelberg lies "The Pearl of the Neckar River" - a little town known as Hirschhorn. It was in Hirschhorn that we saw the sign "Rothenberg - 7 k." We all got excited, and Loren said he felt his ancestral lineage calling to him from some very deep place. We had arrived! Wending our way away from the Neckar River, we traveled up some narrow, windy roads. It was about 6:00 pm by this time, we hadn't made any reservations at a hotel (although we made a mental note that there was a hotel in Hirschhorn) and the dogs were overdue for their dinner, but we were driven to find Rothenberg before we did anything else. 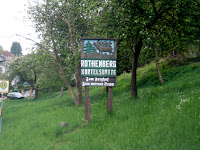 We saw a sign that said, "Rothenberg-Kortelshutte - Hotel-Restaurant-Cafe." We couldn't ask for more. We checked in, and the first thing Haden asked was, "Do you take dogs?"

"Sure, of course!" the desk clerk said in perfect English. ( It turns out she had done an internship at the Sacramento Hilton in California, and she loved San Francisco. Unfortunately, when she was there, 9/11 happened and she said all foreign interns had to be sent back to their countries. That's the first I'd ever heard about something like that.)

This is an amazing hotel lying at the top of a hill overlooking a lush valley. It is a place where people come for the weekends to hike on the extensive trails. It is quit posh with beautiful rooms - out here in the middle of nowhere! We have no idea what we're paying for our rooms, but it's all just part of the fairly tale ride.

We asked the clerk, "Is this the town of Rothenberg?"
"Sort of," she said" "but the old town is 2 kilometers further down the road. It is very small."

We told her about why we had come, and when we mentioned the name "Heckmann" she said, "Ah, that is a very big name in Rothenberg. As a matter of fact, the painter who just painted our hotel rooms was named Andreas Heckmann." 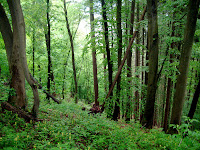 After taking the dogs on a gorgeous walk along dirt paths that led to a forest canopy, we got in the car and headed for Rothenberg.

It was a windy road that went further up the hillside. 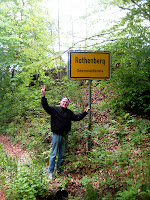 Near the top we saw a sign announcing we had made it!! Yeah! Loren got out to touch the sign and pay homage to his ancestral line! Then abruptly, we were on the top looking down a narrow road. It was so picturesque; so pristine; so unreal, that 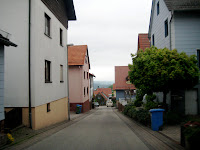 we could have been on a movie set. 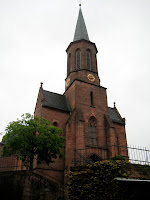 We saw the Evangelical Church where we were told the record of the 1752 marriage of Niklaus Heckmann and Elizabeth Hoffman is kept; we saw an old cemetery that we will go check out later,

and we ended our day in the quintessential 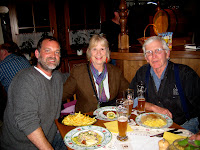 German Brauhaus, replete with waitresses in their dirndl dresses and crowded tables with loud and hungry Germans. The menu showed that they specialized in Schnitzel, so we ordered three different kinds. Mine was the Classic - a fried cutlet served with lemon and french fries. Loren pointed to another on the menu and his came with gravy and noodles. Haden's had cheese on top. All were delicious, especially when accompanied by a good German beer served in fantastically shaped large glasses!
There was a darling young couple who were sharing our table. They knew some English, and they helped us order when the waitress couldn't understand us. It turns out they had visited San Francisco. They wanted to come to the United States for the first time, and they wanted to come some place that was beautiful. So they came to California, went to Yosemite, the Grand Canyon, Las Vegas and Chicago where they had friends. It was fun talking with them. When we told them the reason for our trip, the guy said, "Ya, the Heckmanns are many here. They started in Mannheim long ago and then they came to Rothenberg."

"How do you know about the Heckmanns? Haden asked.

"Oh- I work with a man named Heckmann and he has done a lot of inquiry into the family. I will tell him that I met an ancestor!"

Loren gave him his card, and before they left, we invited them to stay with us in San Francisco if they ever returned.

Since we have just returned to Berlin, and I am quite exhausted (having picked up Loren's cold) I think I will leave off here. I will continue our tale of Rothenberg tomorrow.

Hi Sis,
I'm having the time of my life reading your posts. You make me feel like I was there myself. I'm so proud of you I can't even begin to tell you. Am dying to read the following post and find that Loren had a meeting with some cousins or such. I'm happy you are loving your trip to Germany - as a matter of fact, all of it.
Love, Glorita