Loren has succumb to the damp, rainy days of Berlin. He talks in a basso scratchy voice and is feeling under the weather. So we decided today would be a day of rest after being on the go everyday since we left.
So today's blog will be a hodgepodge of things I've seen and been thinking about, that I hope you'll find interesting.

Leaving Loren behind, Haden and I took the dogs across the street to People's Park which I have talked about in an earlier blog. It is really a beautiful park, and Haden showed me parts of it that I hadn't seen before. There is something quite amazing about this park that once again relates to the vestiges of the war.
This is a picture of one of the bunkers built by Hitler in the People's Park. It was this very bunker that had tunnels leading to the old brewery where Haden's house now stands. Look at the size of it- it's enormous, and a rail train can be seen heading up to it.

These are pictures I got off the Internet showing the absolute destruction of the buildings in Berlin right after the war. 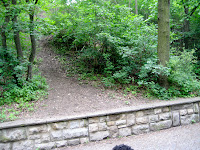 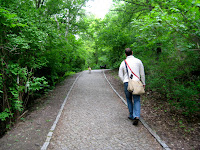 Well here we are in People's Park and we're winding up a beautiful path that switches back and forth as we climb a large mound. It's beautiful, and I think nothing of it until we come up near the top and Haden points something out to me. "That's the top of a huge bunker," he tells me. I can't quite get my head aro 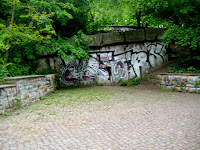 und it. Then he explains that that very bunker seen in the first picture of this blog was covered over with dirt. If you look closely at the very top of the bunker in that first picture, and then look closely at the picture to the left, you can see that it is the very same. Before covering this bunker with dirt, however, tons of the rubble from fallen buildings was brought to this site as well. It was all covered with dirt, grass, plants and trees were planted, and Voila- you have a beautiful hill in an otherwise very flat park. Isn't that amazing? 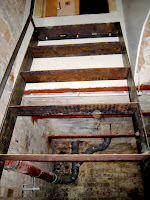 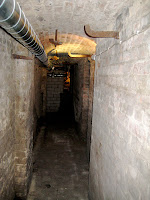 When I returned, I asked Haden to take me down to the cellar so I could see what remains of the tunnels.

He is starting a wine cellar down there, but I have to admit to having a very weird and eerie feeling while I was there knowing that this very house had been connected to a Nazi bunker! 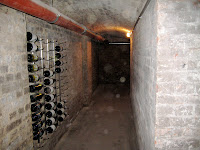 I want to record some of the differences I have noticed while being here.

1. No one uses credit cards - I mean NO ONE! They all have debit cards with some chip in it which they use in stores and restaurants. We have a Visa/Debit card which we tried to use in a grocery store. We handed it to the clerk who said, "Nein, we don't accept credit cards, just debit." We told him it was also a debit card, but he said, "We don't accept credit cards." We asked him if he would just try it in the machine, as we knew it was a debit card. Reluctantly he put our card in the slot, then looked up to us and said, "Nein! Verbotten!"

The Germans do not have debt. They absolutely refuse to buy anything that they can't pay for - even houses. The one exception to this are cars; The Germans LOVE their cars, and will go in to debt to have their Mercedes or Audi of choice. By the way, EVERY German owns a GERMAN car! I find this all very interesting.

2. Every waiter or waitress has a little wallet tied around their waists that contains change. So when you go to pay for a meal, they come over and open up their wallets and give you change right there. The tip, which is usually a mere 10%, is also included in the bill, and the protocol is to "round-up." So if the bill comes to 30.60 Euros, one would leave 31 Euros. Sounds like a nice simple system to me!

3. The service in restaurants doesn't seem very good. We wait a long time for a waiter to take our order; we wait a long time for our food to come; we wait a long time for the check to come. Even though I have no place to go, I found myself becoming impatient. But I think it may just be a more relaxed pace. They certainly aren't shooing you out in order to clear the table for another customer. We also had an interesting exchange with a waitress who brought our order except for one thing When we reminded her, she got quite testy and said, "I only have two hands." They seem to want to be respected as professionals. They don't seem to like to be called over to say bring us some water- but would rather have us wait until she asked us. It is subtle, but I think there is definitely a different ethos to dining in Berlin.
On the other hand, most places have English menus, and when they don't our waiters have spent a lot of time with us translating the menus and telling us the specials. 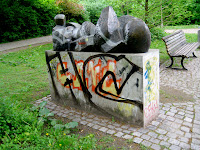 Graffiti is every where. On buildings, statues, benches, walls. At first it appeared ugly and dirty to me until Haden made me think of it a little differently. 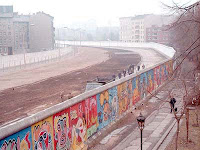 Here is a picture of the Berlin Wall dividing the two sectors of the city. The large swatch of land on the left is what the communists constructed to keep the East Berliners away from the wall. It is called the "No Go" area or "The Death Strip." If the East Berliners tried to go near it, they would be shot! You can see (in the far background) that the eastern side of the wall is untouched. On the West side, people were free to walk right up to the wall, and you can see the art work or graffiti that covers almost every part of it. So it could be that graffiti to the Berliners is a sign of freedom. Contemplating this, it doesn't seem so bad.

5. Memorials are all over the city. Not knowing German, it's often hard to know what they are honoring, but it is not uncommon to come across fresh flowers placed on a site, a stone, or a plaque. 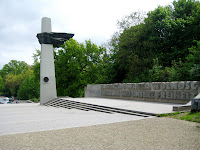 Just today, in People's park, there was a huge monument with Russian writing on it. 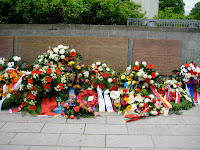 Along the side were a host of fresh flowers- many with ribbons commemorating or honoring something. In the States, this kind of thing would be done on Veterans Day or Memorial Day, but I am struck by how almost daily we see these memorials.

6. I have found a strange paradox: Germans are very law-abiding. The law is there to protect people, and needs to be obeyed to keep Berlin safe. However, perhaps as a reversal of the extreme police state of Hitler, they are fiercely independent when it comes to choices that do not risk others. Unlike in Paris, where we were constantly being warned to be vigilant of pick-pocketers and where a young teen tried to grab Loren's wallet on the Metro, in Berlin there is no such fear. Yet people are constantly jaywalking or crossing the street on a red light if no one is coming. Dogs are welcomed in restaurants; there are leash laws, but people let their dogs run free in all the parks. Toll booths and speed limits are against the law in Germany. It is part of a German's inalienable rights to go as fast as they want on the Autobahn and not have to pay for it! When we went to the Philharmonic Hall, I asked someone if it would be ok if I took some pictures. She said, "No, it is verbotten, but if you only take a few they won't mind." There is something that says it is okay to be different; to be an individual. A healthy stance in light of their past.

7. You can tell when you are in what was the eastern zone by merely looking at the traffic walk signals.

The "Don't Walk" man has his hands splayed out in a definite STOP- you'd better not go any further. The "Walk" man has a little army-like hat on and looks as if he is marching. The signals in the western zone are similar to ours in the States.

It's a small thing, but isn't it interesting that one's political stance could be reflected in something so mundane?

8. Unlike Paris, where couples would be in full embrace on the Metro, or seen making out in front of the D'Orsay museum, I have not seen any public displays of affection. However, that doesn't mean that romance is not happening. In Haden's "trendy" neighborhood, every young woman is either pregnant or pushing a baby carriage. It turns out that Germany, like Paris, subsidizes families when they have children. Maternity leave is one year, and fathers can take two months leave to care for their young children- both of these with pay. Fathers can take some of the mother's leave if he wants. Friends of Haden and Julia just had a baby, and the mother is taking the first six months off and the father is going to take care of the child for the remainder of the leave. These privileges and payments are for residents, not just German citizens. This sounds incredibly humane to me, and certainly recognizes the importance of family, but can you imagine American businesses buying in to this system? What would it do to the bottom line?

Well that's it for now. We leave for our trip to Heidelberg tomorrow which should be very interesting.

Tschuss!
(Pronounced "Chuss" with a little uptone at the end. That's the way all Germans say "good-bye". Auf Wiedersehen is out!)
Posted by nanwebware at 6:29 AM