We went to Treptower Park yesterday, a fascinating memorial, built by the Russians to honor the Russian soldiers who d 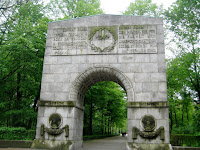 ied in Berlin in the final days of the war. There are 8,000 soldiers buried here. We 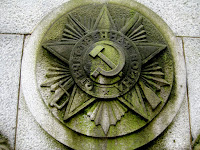 walked through an archway that had Russian writing over it. The side columns displayed the Hammer and Sickle. This park is immense. 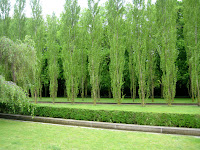 Walking down a long pathway, we passed a grove of 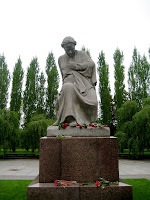 Turning to the right, there was a huge expanse leading to a gi 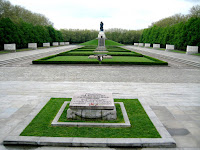 gantic statue which I'll get to in a bit. 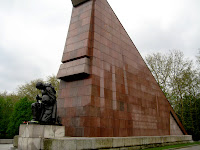 massive marble slabs, each with a Russian soldier kneeling down holding a gun, served as an entryway. There was such a feeling of awe and respect. 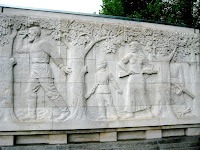 All along the sides of this expanse were huge slabs with pictures of Russian peasants, Russian soldiers. 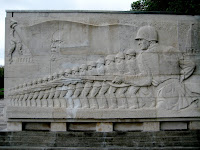 These are sarcophagi where the soldiers are buried.

At the end of each tomb are words of Stalin. 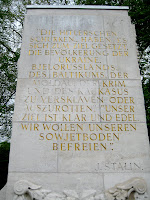 As you know, EVERY reference to Stalin in the Soviet Union was abolished or destroyed after Krushchev declared Stalin's regime an atrocity, apologized to the Russian people, and erased all references to Stalin. This park, in a remote part of East Berlin, is the only place where Stalin still exists! We read that this could be because they didn't want to destroy Russian graves or because the words themselves were not offensive.


Towering over this expanse of sarcophagi looms an enormous statue of a Russian soldier holding a young German child. 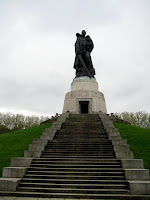 Staring at that statue I felt such gratefulness for that Russian soldier- he was the liberator of the Germans from the Nazi atrocities. As a matter of fact, the sculpture reminded me so much of that famous photograph of the New York fireman 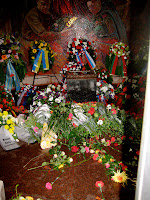 holding the young child with the rubble of 9/11 behind him. Walking up the steps, you look in through some bars, onto what looks like a kind of altar with elaborate paintings of Russian soldiers and gold embossed Russian words. What amazed me were the number of fresh flowers that people had thrown in through the grates. Who are these people? Are they Russians, visiting lost relatives? Surely they aren't Germans honoring the Russian dead. After all, the Germans fought Russia to the end; the Germans were the ones who killed these 8000. Or were there Germans who were grateful to be out from under the rule of Hitler? And what about that young girl held in the arms of the Russian soldier? Was her life saved? Did she end up being raised in East Berlin under communist (not Russian) regime? It is all very confusing. 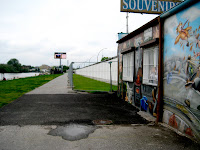 trying to make sense of what I just saw, Haden drove us to a mile long section of the actual wall that was still standing. Here you can see, beyond the Souvenir shop, the expanse of the white wall. For the 20th anniversary of the fall of the wall, Berlin invited the artists of the city to paint this wall. It is fantastic to see, and I would love to try to find something that might explain the symbolism of some of the paintings. Here are only a selected few: 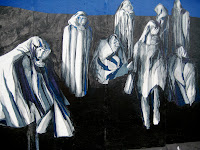 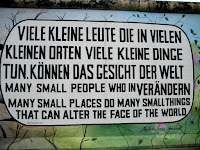 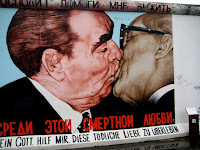 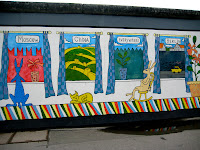 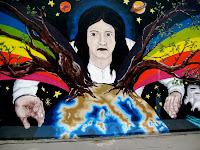 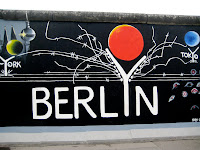 There were a few white panels unclaimed by the artists where people had written various things. 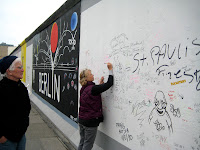 I couldn't resist writing "Take Down This Wall" on the actual 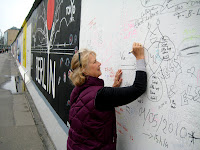 Berlin Wall. (For my Republican Friends, I know I am quoting Ronald Reagan, but I couldn't help feeling the symbolism as I stood before the actual wall.)


We're having a lovely time in Berlin. The pace has slowed down, we're totally enjoying Haden's 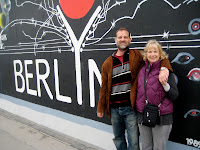 company and conversation, we're reading, exploring, eating well. Life is good!
Posted by nanwebware at 12:49 AM