It was founded in 1882 by fifty-four musicians who broke away from their conductor after he told them he planned to take "the band" on a fourth class train to Warsaw for a concert! After a number of conductors, Hans von Bulow took over the post in 1887 which helped to establish the orchestra's international reputation. Guest conductors have included Richard Strauss, Gustav Mahler, Johannes Brahms and Edvard Grieg.
The o

rchestra continued to play during WWII, although not without some major hurdles. For sixty years, the role of the Berlin Philharmonic under Nazi power has remained obscure. However, in 2006, the orchestra announced it would investigate its role during the war.

In Hitler's Third Reich the orchestra was

known as the "Reichsorchester" and functioned under the control of Joseph Goebbels as part of his notorious Ministry for Public Enlightenment and Propaganda. 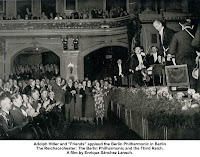 A film was made on the occasion of the Philharmonic's 125th anniversary which you might find quite interesting. Part of it

There was great public interest in the showing of this film; the concert hall was filled to overflowing. Germans wanted to know how such an outstanding orchestra that symbolized the height and richness of culture, could have allowed itself to be used by such a barbarous dictatorship? It seems the film never really answered that question, although the financial problems of the orchestra during the economic crisis of the early 1930's when it was threatened with bankruptcy most likely played a part. Wilhelm Furtwangler, who had been the conductor since 1923, turned personally to Goebbels after Hitler seized power, and negotiated a deal which involved the orchestra working under the Propaganda Ministry. The survival of the Berlin Philharmonic was secured with this "Pact with the Devil," but not without a price. The orchestra served the representatives of the Nazi regime, providing concerts for Nazi organizations, music for their party congresses in Nuremberg and the Olympic Games. Orchestra members were exempt from military duty, received privileged pay and living accommodations, and were able to travel abroad to Spain and Portugal for concerts until nearly the end of the war in 1945. I have gathered most of this information from an in-depth article from the World Socialist Web Site. If you are interested in further commentary of the orchestra during the Hitler era, you can find this article at http://www.wsws.org/articles/2007/dec2007/reic-d18.shtml

Wilhelm Furtwangler fled to Switzerland in 1945. Leo Borchard took over for Furtwangler, but for only a few months. Borchard was accidentally shot and killed by the American forces occupying Berlin. Sergiu Celibidache became chief conductor from 1945-1952 when Furtwangler returned. The Berlin Philharmonic grew in stature and fame when Herbert von Karajan took over the helm from 1955-1989 due to the many recordings and international tours. The above mentioned article gives further information about von Karajan, an Austrian who had served the Nazis from his youth and had been a member of the Nazi party since 1935, yet served as conductor in post war Germany unhindered until his death.

The present conductor is Simon Rattle 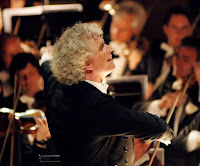 who signed on only under the condition that the Berlin Philharmonic be turned into a self-governing public foundation with full power to make its own decisions. This required a change in state law which was approved, and Rattle became the chief conductor in 2002.

Since the original concert hall that had been situated in the eastern section of Berlin was destroyed in 1944, construction began on a new hall in the western zone in 1960 and was completed in 1963. 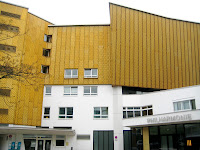 I am struck at how unattractive and unsubstantial it looks from the outside, but once inside, it is a marvelous building.

There were people filing in in a steady stream at noon for a 1:00 free "luncheon" concert, and we were soon to find out why. The concert was not held in the concert hall, but rather in a big open interior courtyard area. There was a small sectioned off area with chairs that was for only people who had some kind of card designating them as handicapped. 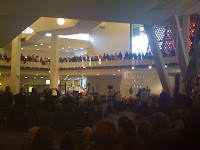 The rest of the audience collected themselves along railings, stairways and steps. Many had come to partake of the delicious buffet or to buy a salad to eat at tables around the hall. There were all ages in attendance, and the 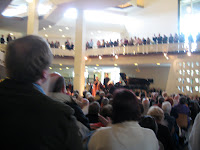 atmosphere was one of a kind of high class picnic! When the pianist and violist began playing, there was total silence and the audience was rapt.


We couldn't get in to see the main concert hall as the orchestra was having a rehearsal.

However, there are tours everyday at 1:00, and we may go back just to have a look. 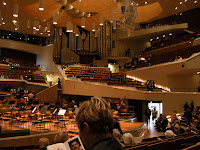 It is said that the acoustics are phenomenal due to the pentagon shape of the hall. Pictures I got from the web show the also famous "theater-in-the-round" design. 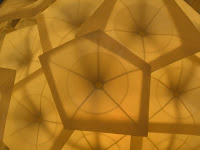 There is also a very interesting ceiling design which I presume also helps intensify the sound. A very interesting visit. We took the bus home, but not before stopping off at The Einstein Cafe for lunch. We tried the club sandwich to see how it compared to our concept, and it was exactly the same as any club sandwich in San Francisco or Iowa! We came home and nestled in for the rest of the evening. Wine and conversation flowed, and it was 8:30 before we realized we hadn't had any dinner. Haden cooked some delicious lamb steaks and I made the salad. Life continues to be good!
Posted by nanwebware at 10:31 PM