What a difference history makes

I am totally struck by how different Paris and Amsterdam are. Some say the Parisians are haughty and think that they are the elite of Europe. Even a cab driver in Paris told me that. I tried defending the Parisians saying that they had been very nice to us as many of them even tried to speak English to us, but the cab driver said that's because they are in the tourist business and have been taught how to smile. The everyday Parisian is a snob and won't give you the time of day. "They are very arrogant," he told us.

Well, when you think about the French history, the common citizen was always surrounded with wealth and opulence. It must have been something to be alive during the reign of such kings as Louis XIV or such Emperors as Napoleon I. These guys spared no expense to let the world know who was boss. What might a French servant girl or a French dock worker think looking up at the grand palaces, marble statues, and glittering gold domes? I dare say they thought, "Someday...someday, I, too, will enjoy all of that." And sure enough, that someday has come, and ALL of the French citizenry is enjoying all of those riches merely by living in Paris. Loren surmises that is why the little pastries look like jeweled gems and are displayed in such a magnificent way; that is why all the shop windows are artistically arranged; that is why the city is so meticulously cared for; that is why many of the museums are free. We also decided that that is why you can find escargot, mussels, pate and tartar at almost every corner bistro being enjoyed by the working populace. Think about it. The French are reaching back to their roots of kings, queens, bishops and Popes who dined lavishly.

Comparatively, we, in America, look forward to barbecue ribs and baked beans or a good steak on the grill - as if we were still on the range! The American dream is usually suburbia, with a large home and a big expanse of green lawn - the suburban prairie. We are a society of jeans and jingles, just like our cowboy ancestors!
Which brings me to Amsterdam... what is the history of Amsterdam?

This is the coat of arms of the City of Amsterdam. The motto reads "Valiant, Determined, Compassionate." Yesterday we went to the Amsterdam History museum to find out what is impelling the Dutch to live the way they do. This is a city of 850,000 consisting of 170 different nationalities making it the most diverse city in the world! The initial settlers came down the Amstel River to the boggy coast, and Amsterdam literally rose out of the ocean. They built islands and canals, and as the city expanded, they built more islands and more canals. Because of its location, it soon became a lively port and trading post. Trading companies like the Dutch West India Company were run by prominent families and their cronies and had their own Civil Guards to protect them on land and sea. Ship building was a natural adjunct trade that also grew up around here. Amsterdam also was the financial hub of all of Europe during its Golden Age of trade and boasts the very first stock exchange started by the Dutch East India Company trading its own shares.

One of the explanations for the incredibly diverse population is that Amsterdam lost more than 10% of its population to the plague in the mid-1600's and had to replenish its workforce through immigration.

I am surmising now, but I would say because the merchants and citizens themselves built this city, they were invested in keeping it running smoothly. The Dutch were very civic minded, and from very early times, they showed concern and charity towards orphans, lepers, handicapped, and widows. They needed to rely on themselves from the start, and were not subjects of any realm, or beholden to any royal master. When t 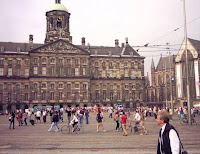 heir city hall burned, they built a new magnificent one that was called the eighth wonder of the world. Nowhere had a building for civil use been built that was so grand. As a matter of fact, it was so nice that, during the Napoleonic wars when the French came and captured Amsterdam, they took over the city hall to house their officers!

The menus in typical Amsterdam menus include tuna pie and fried sardines! I've been told the best food can be found in the Indonesian restaurants which are very plentiful. The city of Amsterdam is one of narrow streets and congested canals with cyclists, cars and pedestrians vying for the small road space. The shop windows seem crammed compared with the tastefully decorated Parisian shop fronts. Even the fashions seem so different. 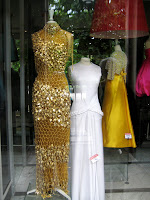 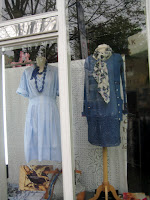 Of course this is an exaggeration, but there is some truth in it: Paris on the left - Amsterdam on the right! 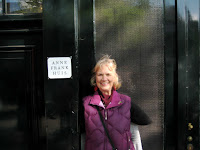 course we went to see the Anne Frank museum which was beautifully arranged. There is a constant line around the corner of people wanting to get in. You can get tickets on the Internet that allow one to bypass the line, but they are sold out for weeks. It is amazing to me that a young girl of 13 has had such an amazing, profound effect on so many people. The museum had many quotations from Anne on the walls, and after going through the whole Annex, there was a beautiful exhibition that encouraged us to fight against discrimination in our own lives. One of the most powerful quotations for me was, "You've known for a long time that my greatest wish is to be a journalist, and later on, a famous writer. In any case, after the war I'd like to publish a book called 'The Secret Annex.'" - written May 11, 1944. How ironic it is that her diary has been published in countless languages, and she is, perhaps one of the most famous writers of our time. After having taught the diary to my 7th graders for nine years, it was a very powerful experience, and one I would highly recommend for all who find themselves in Amsterdam.

Then of course, while in Amsterdam, we had to go visit one of the famous 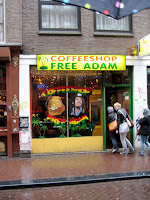 Coffee houses where marijuana and other drugs are legally sold. I had a smokey den of iniquity in my mind reminiscent of a scene I remember from "The Good Earth!" What I found totally surprised me. We were definitely the token older couple in the place. Most of the people were in their 20's and 30's. I couldn't tell if they were mostly tourists, but I heard a variety of languages. I don't think they served liquor, mainly coffee and tea. So we ordered two coffees and watched. One table had five young men in lively conversation. There were cigarette cartons on the table, but I didn't see them smoking anything else. Another couple had bought a small cake, and I overheard the shopkeeper say that it would take about an hour to go in to effect. Another couple smoked a joint while sipping their coffee, and it all looked quite civilized. No one stumbled out looking out of control; no one looked as if in a stupor. You could have been in a very quiet cafe in some Mid-West American city!!

But it is fun to see all the H 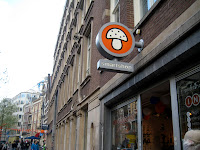 ead shops where they sell paraphernalia (although we have a lot of those in San Francisco) and the Smart shops where you can get mushrooms and other drugs.

Today we hope to go see the Van Gogh and the Rembrandt museums, although it looks like another cold and dreary day. Yesterday, when we stopped at a little pub- like place for a late lunch, I asked the bartender if there was a rainy season in Amsterdam. "Yes," he replied. It goes from about October 1st until around September 30th!" More later!
Posted by nanwebware at 10:21 PM

"If you had to pick between living all the time in Paris or all the time in Amsterdam, which would you pick. Would you want to be high and lofty in Paris or down and dirty with the Dutch?" I will have to admit that when I read the beginning of the question I expected something like "high and lofy in Pairs or high and dirty with the Dutch.
Concerning the weather in Holland:
when we visited friends outisde of Amsterdam we were told that it was going to be warm today (I was freezing in shorts) 64 degrees C. 32 in the morning and 32 in the afternoon. That was in July.