It's a beautiful day this morning: blue skies and sun. It's too bad we're leaving for Berlin in a few hours because yesterday, our last full day in Amsterdam, was bitter cold with blustering winds and pelting rain the entire day. We got a day pass on the transportation system which, although a challenge, was kind of fun. Unlike Paris, Amsterdam is not an easy city to navigate around. In Paris you have the Seine and you know if you're on the right or left bank; you have Notre Dame, The Eiffel Tower, the Louvre and the Tower of Montmarte- huge landmarks that you can orient yourself around. In Amsterdam, you have canals, but they all look alike and they wander at different angles, so you come to a corner and you think you've been there before. You look up at the building to check our the name of the road you're on and it will say something like, Prinsenaracht or Keizersgracht or Linnaeusstraat and you're not quite sure if you have been here or not. ALL the buildings in Amsterdam are brick, so that, too, contributes to a sense that "I think we've been here before!"

At any rate, Loren did a great job of combining two maps: one with the trolley stops on it, the other with the names of the roads. Looking at both simultaneously, he was able to get us to the Van Gogh museum. Most everyone speaks English and a very nice lady told us where to get off. As we were passing a street she said, "That is where the most expensive stores are in Amsterdam, and this is a very wealthy neighborhood. Since it was pouring, it was hard to see much, but the neighborhood was still all brick!

When we got to the Van Gogh museum there was a huge line winding around a long block. We were told it was about and hour and a half wait- in the freezing, pouring rain. We went across the street and got a hot cocoa and a latte, and decided to try the big museum called the Rijk Museum.

(I got this picture off the Internet because I couldn't juggle holding my umbrella, my latte and my camera all at the same time. That's why it looks sunny.) The Rijk also had a huge line. I don't know where all these people were from, but they were certainly more stalwart museum goers than we were.

We hopped on another trolley and went across town to the Rembrandt museum where there was no line, and it was

wonderful. We had an audio guided tour through a beautiful house where Rembrandt lived during his peak years. He bought the house for 13,000 guilders, a very tidy sum at the time, but nine years later, he was unable to make the payments and had to foreclose on it and move out - does that sound familiar? It was a beautiful museum and great fun to be able to walk up the steep winding staircases and see the tiny bed where Rembrandt slept. (Did you know that in addition to being shorter people back then, they all slept half sitting up because of the fear that blood would rush into their heads and kill them in their sleep. That is why beds back then were so much shorter!) Walking in to The Master's studio was amazing.

The easel was set up, the paints were out, 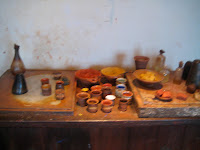 and despite it being a rainy day, somehow it was the brightest room in the house. It almost seemed as thought Rembrandt has just stepped out for a smoke and would be returning shortly! I'm so glad we went there- it is my kind of museum, but I couldn't help to wonder why the Van Gogh museum drew such cr 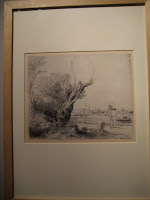 owds and the Rembrandt was not crowded at all. I think Rembrandt is the better painter myself. But perhaps it has something to do with the collections in each museum. There were not a lot of Rembrandt's paintings displayed, it was more about his life and his house. Although seeing the room where he did his etchings with some of his exquisite etchings hanging up to dry was much more fun for me than rows and rows and rooms and rooms of art.

We had a late lunch at a kind of diner/bar. We each had a Heinekin and I had a baguette with warm Brie, bacon, tomato and honey! The honey was dribbled all around the plate, and you were expected to dip the baguette in to it. It was quite delicious - something to try when I return home. For dinner, I had my best meal in Amsterdam. We found a Chinese/Indonesian restaurant with three tables in it and a steady stream of take-out orders. I ordered something off the Indonesian side of the menu and it was delicious! I know that we have Indonesian restaurants in San Francisco, but I've never thought to go to one. Maybe I'll have to try it. I wish I knew what I ordered, but it was in Dutch!

We are due to leave Amsterdam at around noon on a 6 hour train ride to Berlin. We are thinking that we were on one of those high speed trains from Paris to Amsterdam. It was quite high class, with a lovely lunch with wine served. We don't quite know what to expect on this ride. We'll keep you posted!
Posted by nanwebware at 10:09 PM

Nancy, this blog is so much fun. I've been following you and Loren as you go, with great interest. Now I get your suggestions to me for other writing venues. I love that you and Barbara met in Paris...definately a small world! We look forward to seeing you back home. Judith