Paris, Amsterdam, and now, Berlin. What a study in contrasts. Berlin is so interesting, and not at all as I imagined. First of all, here we are staying in East Berlin... East Berlin- doesn't that conjure up abject poverty, Soviet high rise buildings with stark, cookie-cutter facades, etc? 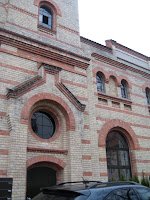 Well here we are in a two hundred year old Brewery that has been converted in to beautiful condos. Haden and Julia have kept the integrity of the brewery in their place which has the original brick walls with various hooks and objects poking out, but there is an ultra modern feel to the cavernous space with a 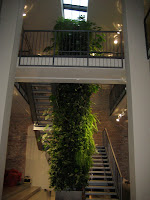 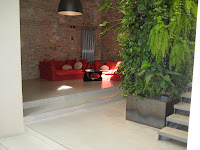 Haden made us a beautiful meal our first night, including fresh ground sesame seeds for his salad dressing! I was quite impressed. 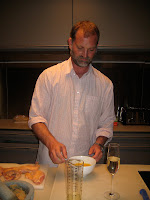 The brewery is at the end of what used to be a huge forest with a garden where people would gather to drink the beer. That was 150 years ago. I'm not sure how long it functioned as a brewery, but during the war, the brewery was used by the Germans and was heavily bombed when the Russians came in to capture the city. During the Russian occupation the brewery was just left to decay further. After 1989, developers moved in, repaired part of the building leaving the bullet holes untouc 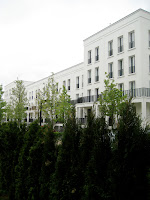 hed around the outside. When the builders were working on Haden and Julia's place, they discovered tunnels underneath the brewery that ran all the way to the Reichstag and Goebbel's headquarters! What used to be the forest with the beer garden has become lovely townhouses occupied by young couples with hosts of children. So this was our first exposure to the gentrification of East Berlin!!

Just across the way from these townhouses is 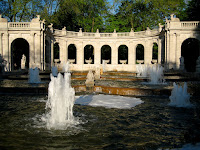 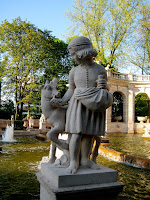 There is also a beautiful biergarten where many couples were sitting outside enjoying a beer. And this was all available to the East Berliners? I couldn't believe it! We walked all around the neighborhood, and even though there were some ugly, uninteresting buildings around, in the main, it was a very attractive area bustling with cafes and shops. We had breakfast at a cafe that was sumptuous, and only cost us about $5.00 each- that same breakfast in Paris would have been $20.00 each! 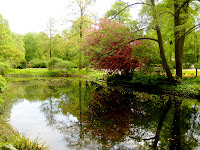 In the afternoon we put the dogs in the car and drove to Tiergarten- which is the equivalent to Central Park in New York. It used to be the 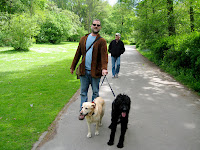 Kaiser's hunting grounds, but he gave it to the people. It was beautiful, but again, not very old. Haden told us that during the occupation, every tree had been cut down for firewood; nothing was left. And in the Spring and Summer, starving East Berliners tried planting things for their food!


From there, we walked through the park over to the 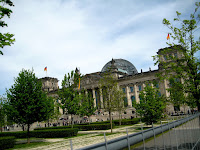 Reichstag. This building is once again the seat of the government. They have repaired it to the original design, but added a transparent dome that allows viewers to look down on the politicians and see what they are doing. No more secrecy- never again! 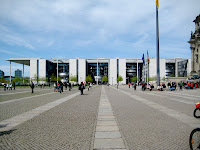 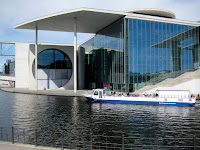 Surrounding the Reichstag are all government buildings- shiny, new and modern. During the occupation, all businesses left the city, and the capital was moved to Bonn. When the wall came down, the capital was moved back to Berlin, but most of the businesses stayed elsewhere. So basically, the only thing happening in Berlin right now is government business. They are trying to get more companies to move back, but it is a slow process.

There are memorials everywhere. 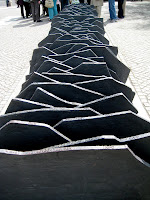 This one commemorates the members of Parliament that Hitler, upon declaring himself sole ruler of Germany, sent to concentration camps. He wanted his own people in power and needed to get rid of the "Second Reich." 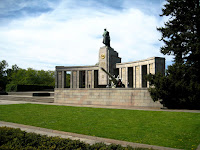 This is an interesting memorial to 2000 Russians who died in the siege of the city. There were so many killed in that one night, that the Russians needed to bury their dead quickly. This memorial went up immediately, using the stones from the demolished Reichstag nearby. Now it is a looming presence, cared for by the city of Berlin- a monument to their captors!!

The Spree River runs through Berlin and was part of the dividing line between East and West. 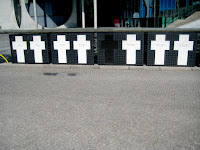 The Brandenburg Gate is an 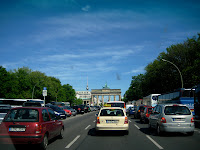 impressive site, as as we drive around it, there is a dark brick demarcation line that shows where the wall once stood. It must have been an amazing day when East Berliners crossed through the gate, and all Berliners began to chip away at the wall until it was no more. It reminds me of something Thomas Friedman said in his book "The World is Flat." On 11/9 the wall went down; on 9/11 the wall went up.

Right next to the gate, in the East Berlin district, is the U.S. Embassy which has a very interesting story. The United States bought an exquisite home back before the first World War, and they were planning to renovate it and move their embassy there. Unfortunately, before they had a chance, the war broke out. After the WWI, they again began plans, but the unrest in Germany, then the r 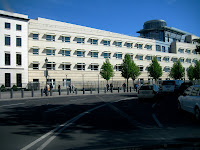 ise of Hitler and World War II forced them to put their plans on hold. After WWII, this property was in East Berlin and once again, they were unable to move it. After the war came down in 1989, the German government gave the U.S. their land- but by this time the mansion was gone. So here is the U.S. Embassy that took over 100 years to build.

It's a cold and rainy day today, so we might take a city tour on one of those Hop-on-hop-off busses to get a lay of the land. We're having a fascinating time... more later.
Posted by nanwebware at 11:54 PM