I had a wonderful mother's day with Haden taking us to some very unique places. First stop was 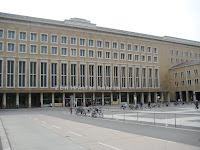 Tempelhoff Airport. I was quite excited to go as I had just read the book Daring Young Men- The Heroism and Triumph of The Berlin Airlift June 1948-May 1949. Here I was at the exact place where that heroism occurred. 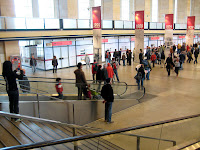 It is a cavernous building. As a matter of fact, Wikipedia states, "Tempelhof Airport's main building was once among the top 20 largest buildings on earth!" It has a very interesting history. In Medieval Berlin, it was land owned by the Knights Templar, thus getting its name. Later it was used by Prussian forces as a parade field. In 1910, Orville Wright made a demonstration flight, but it wasn't until 1923 when it became an operational airport. Lutfhansa was founded at Tempelhof in 1926. Hitl 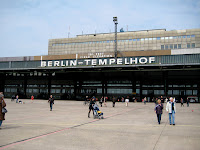 er had great plans for Tempelhof and the area around it. There are pictures of these plans which include a building with a dome four times the size of St. Peters that would have been 700 feet tall that could hold 180,000 people. These designs were intended to make Tempelhof the gateway to Europe and a symbol of Hitler's new capital city. In 1934, as a part of Albert Speer's plan for the reconstruction of Berlin under the Nazi era, architect Sagebeil was ordered to replace the old airport with a new one which was to be in the shape of an eagle. Although under construction for more than ten years, it was never completed because of WWII.

Although it was never used as a military airport for the Germans, there was an elaborate underground railway system with what is called a "hub and spoke" tunnel arrangement where airplane parts were brought in from all parts of the city, the aircraft was then assembled and flown out. When the Soviet forces took the airport in the closing days of the war, the commanding German officer refused to carry out his orders to blow up the base, preferring to kill himself instead! After he died, the Russians tried to clear the many lower levels of tunnels and rails, but many were killed because they had been booby-trapped. The underground tunnels were filled with water, and I found out from my research that it is still filled with water due to the incendiary bombs!! Egads! I was walking over bombs!!??

It is a very good thing that the German C 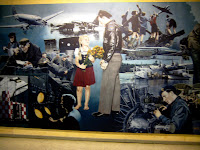 ommanding Officer disobeyed orders, and refused to blow up the airport because Tempelhof was a critical base of the Berlin Airlift that would soon follow. This is an amazing time. After the war, when Germany became divided among the French, British, Americans and Russians, the city of Berlin was smack dab in the middle of the Russian section which became East Germany. The Brits and Americans were not going to give up Berlin to the Russians, so they decided to divide that city in to four sectors as well. According to the Yalta conference, the Tempelhof airport was turned over to the U.S. Army in July, 1945. When the communists took power in East Germany, they built the Berlin Wall, separating the two parts of the city, but Soviet dictator Joseph Stalin wanted more. In 1948 he ordered hundreds of thousands of Red soldiers to close off all land and water access to the city. He was taking a gamble that he could drive out the small contingent of American, British and French troops because their only option would be to either watch the Berliners starve or start WWIII. Truman, against military and political advisors said, "We stay in Berlin. Period." Thus began the remarkable Berlin Airlift. Pilots, who had just returned to their homes, families and civilian life three years earlier, were being called up to return to Germany - not just return to Germany, but to actually help feed and save the lives of the very people that they had just dropped bombs on! Under the command of General Tunner, the Berlin Air Lift began supplying supplying the world's fifth largest city, 2.5 million people (plus 6000 occupation troops), by air alone. Tunner was quoted as saying, "... I don't say this idly- but we now know, as we never knew it in the Air Force before, that we can fly anything, anywhere, any time." 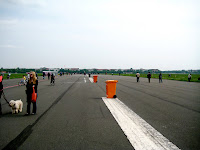 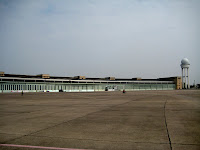 port was where it all happened... where at the height they were bringing in one plane every twenty seconds! Looking up at that control tower, and walking across a huge field to stand on the runway, I was awestruck! 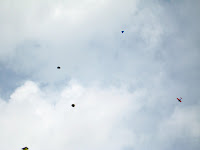 The fate of Tempelhof Airport is still unclear with environmentalists, developers, and sports interests all adding their ideas to the pot. This weekend Berliners were invited out to the airport for a kind of fair with bratwurst, waffles, beer, and music. Bicycles, dogs, skateboards and baby carriages filled the area. All were invited to fly kites to honor the Berlin AirLift; it was very special to look up in the air at those kites and think of the miracle of the AirLift.

I have to mention something I find fascinating... today is Sunday, and in Germany, it is against the law for businesses to operate on Sunday. I was amazed by that until Haden told me that this law is one of the very few that all political parties agree on. It satisfies the far right who believe it should be a day of rest, reflection and religion; it satisfies the communist party who feel it should be a day for families. I so clearly remember when stores weren't opened on Sundays - it was in the Lord & Taylor shopping center where I learned to drive. My father would take me over there every Sunday and I would careen around the huge empty parking lot! I also remember living in Connecticut with the "Blue Laws" that forbade the sale of alcohol on Sundays and the beer section would be covered up in the supermarkets. But I can't imagine this kind of legislation ever taking hold in our U.S. consumer driven society. But what it does allow is for families and friends to go out to the Tempelhof airport or the local flea market and not worry about catching up on their shopping!

Our next Mother's Day stop was a huge flea market. 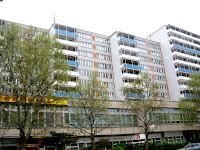 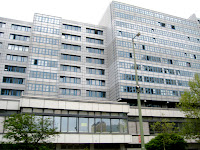 Our drive took us well into what used to be East Berlin, and I can't help being fascinated with the Soviet non-descript panel buildings. They aren't very creative buildings, but they aren't horribly ugly either. I think it may be just the sheer size of them which strikes me. These buildings go on for blocks and blocks, and I can't help wondering how people found their way home and every place looked just like another. 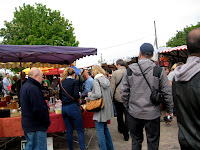 he flea market was so much 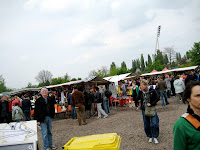 fun as it got us out of the history of Berlin and right in the middle of the present day hubbub. It was just like any other flea market around the world, and I even bought a blouse for one Euro! 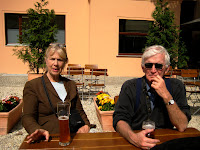 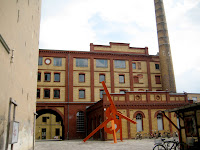 Our next stop was a relaxing break at a nearby BierGarten where we had a great philosophical discussion about trying to save the world afterwhich we were all exhausted. 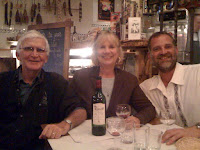 So we headed home for a break before going out for a delicious French dinner at Cafe Maurice's, a neighborhood restaurant that Chancellor Angela Merkel, used to like to go to when she lived in East Berlin.

It was a lovely Mother's Day. The only thing that could have made it better would have been to have Michael and Arthur with me, but Haden made me feel very good. XO
Posted by nanwebware at 8:30 AM