We are running out of time and are so aware of what a difference those five extra days that the volcano took from us would have meant. Alas! This is our last full day in Paris, and it is also Loren's birthday- so I suspect it will be a great day despite the fact that it is our first day of rain!
Wednesday night we had a wonderful evening being entertained by very special friends of my sister, Carol. Sabbett and Alain invited us to their home which is right near the Champs Elysee, and it was so nice not to feel so much like a tourist. The conversation was lively and very interesting, and we were struck by the similarit 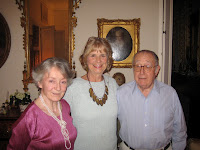 ies in how we view our respective countries and the problems we face. They, like us, are concerned about the huge immigration, especially of the Algerians who are putting tremendous pressure on the infrastructure of France. Health care, education, government 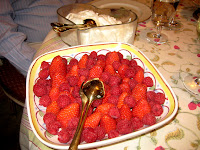 workers early retirement, and public transportation were raised as subjects of concern. We could have been talking about San Francisco!! The meal was fabulous- cold salmon with a delicious verde sauce, cucumber salad, and a beautiful bowl of fresh strawberries and raspberries with an amazing whipped cream like topping.

Today we went to the Bastille market- 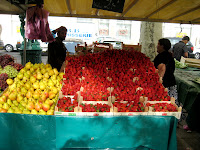 what fun it would be to buy all the fixings for a great French meal at the open market! I'll just have to wait and do that on my next trip to Paris.

Then we took the Metro to the D"Orsay museum. I'm not a big museum person as many of you know, but I loved the d'Orsay. It's an old railroad station with a big gold clock at one end like the one at Grand Central Station. I loved the layout, and when I turned a corner and saw Renoir's street cafe painting which was about 5' by 6' I had to catch my breath! 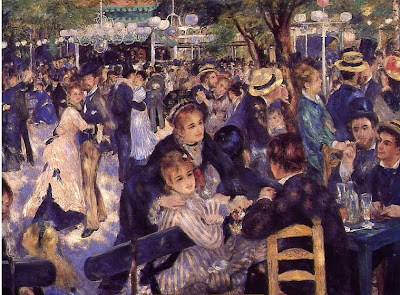 I had seen this painting many times before, but there, in the D'Orsay, in the city of Paris, after having experienced the Parisian cafe scene for the past week- well, all I can say is that it was magical!

Later in the afternoon, we went to the Pere Lachaise which is a very famous cemetary where many literary and artisitc people are buried like Balzac, Proust, Oscar Wilde, and perhaps the most sought after, Jim Morrison. The cemetary was huge. I mean Huge! So although it might have been fun to go searching for many of these luminaries, I only had one in mind: I wanted to see Edith Piaf! 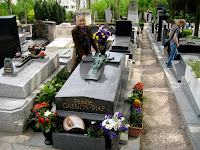 Since I probably won't write another blog until we leave Paris, I want to tell you about an peculiar situation for Parisians on moving day, a custom for bachelors about to be married as well as the love affair Paris has with food.

Because these buildings are so old- many built in the 15 & 16th centuries, there are either NO elevators or very tiny elevators. 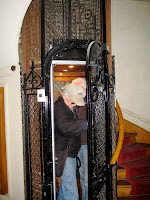 Ours fits only two people, and you had better be on good terms with each other as it is a very tight fit. I wondered how people get their furniture in their homes. 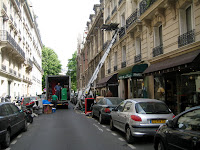 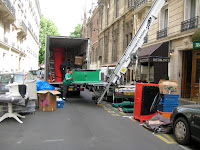 way a bed or couch would fit in the elevator, and the stairs are narrow and circ 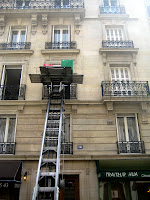 I was told they go through the window! And sure enough, we were out walking, and saw this moving process in action!


Another French custom is for the friends of the groom-to-be to take him out the night before his wedding, dress him up, ply him with wine and make a fool of him. 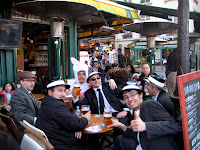 This is a picture I took, and when I brought out my camera, they all shouted and posed. Then, as I was about to leave, they offered me a gift: A real carrot; a real flaccid, droopy carrot!!! Ah, the French!

If you don't enjoy food, I would suggest you go to London; Paris would be wasted 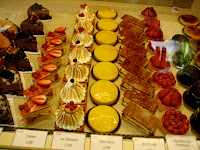 on you. I am loving trying to savor the French cuisine. We discovered a wonderful Patisserie just down the block from us, so I buy croissoints there in the afternoon so we can have them 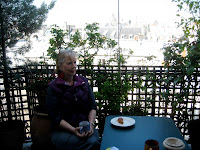 with our coffee in the morning on our little veranda.

When we went to dinner at Sabette and Alain's, 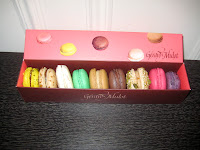 I went to this same Patisserie and bought some macaroons- all different kinds, which I picked out myself and they put in a charming little box! 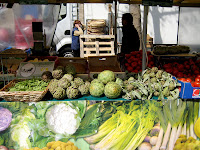 move from neighborhood to neighborhood. We have one right around the corner that comes on Thursdays and Sundays. Look at the size of those artichokes!

We haven't gone to any really high end restaurants. Things are so expensive here that the equivalent of a local, family style restaurant at home would cost you about $30.00 for lunch per person and about $50.00 for a dinner. The high end, very fancy ones are listed as being 120-150 Euros and beyond per person which is about $150.-200! AND that's with NO wine!!! But, the amazing thing is that these small, family run Bistros are fabulous! I am trying to order French things while I'm here. The other night I had a lovely fish cassoulet which was served in what looked like an ancient metal turrine that might have long been in the family! I decided to try some unknown cheese for dessert. I had NO idea what I was ordering; but I intentionally passed over the Camembert as I knew that, and I wanted something French that perhaps I could only get here. The cheese I ordered was called Cabe cou du Perigord. If any of you have a local cheese shop around you, go and try to get this cheese. It is the best I have ever tasted! Then, as I mentioned, I had blood pudding for lunch which was quite good although I don't think I'll try it again. 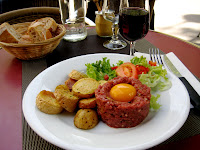 I was quite surprised when I ordered tartar de boef and it came with a raw egg atop. Raw beef, raw egg- wouldn't that be banned in the U.S.? Other special treats are, of course, French onion soup 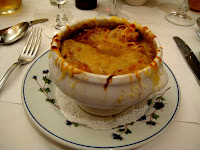 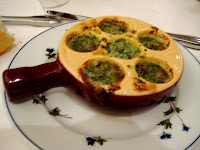 escargots! They taste so French when one is in Paris!


Paris closes down for lunch from noon to 1:30. Even many of the stores have signs saying "closed for lunch." 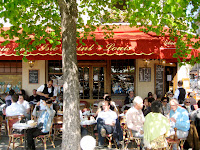 The cafes come alive - and remember they are having lunches that cost minimum of $30.00 without wine- but everyone is drinking wine!! What a life!
There is a custom at many of the restaurants 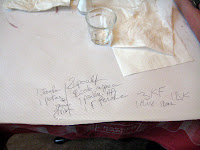 here to write down the order on the paper table cloth and then when we ask for the "addition" the waiter just totals up the bill before our eyes!

Another very Parisian event is hot chocolate at Angelina's. 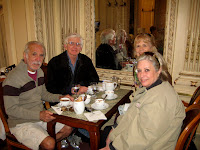 Our profoundest thanks to all of you who recommended this place! OMG!!! The chocolate is beyond description: so thick, so rich, so decadent - you can't imagine. But that's not all - it is served with a large bowl of whipped cream and you are expected to place a large dollop (or two) on top of this ambrosia. We went with Glorita and Geroncio. The next day, Glorita called to see if we wanted to meet at Angelina's again for another hot chocolate!! Noooooooo, I said! To give in to such indulgance was impossible for me, even in Paris!

We've had a number of Croque Monseurs which are great pick-me-uppers when our energy is waning mid-afternoon.

And last night we went to a charming Souffle restaurant 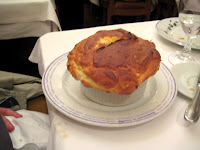 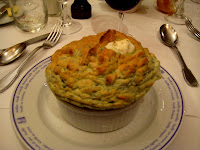 Souffles for entree, (entree in France means appetizer) for the main meal and for dessert! The one thing I have yet to try are mussels which I hope I can fit in before I leave! - It may have to be for lunch because Loren has requested that we get a baguette, some cheese, some pate, and a bottle of wine and spend his last night in Paris with a birthday picnic along the Seine.
Au Revoire from Paris.
Posted by nanwebware at 8:26 AM