It's Wednesday morning, and Loren and I are sitting at a cafe: We are here because there is no coffee at home - and there is a story about why!

We ran out of coffee; so I went to the Mono Prix to buy some more. The Mono Prix is the big department/grocery store. Remember there is a butcher shop, a bread shop, a bakery, but I hadn't seen a shop that sold coffee, so I had to go to the big store. I had many choices, and I had selected one, but I couldn't tell if it was whole bean or ground beans. A little man was in the aisle.
"Parlez vous francois?"
"Un peus. Une Peus."
"Could you tell me if this coffee is whole or ground?"
"Ohh," he said making a big muscle with his left arm. "Eez good. Very robuste."
"Ah, oui, oui," I replied. But is it ground?" I said, making a circular motion with my arm, "or is it whole bean?" I asked holding my hands in the shape of a big coffee bean."Ahh. Oui, Oui, Not is grind:"
"I don't have to grind?"
"Not is grind; No."
"Merci, merci beaucoup."

I was so proud of my exchange that I told Loren all about it when I returned. This morning, when I went to make coffee, Voila! I opened my new package of lovely espresso coffee, and WHOLE BEAN!! I thought I had totally understood my "conversation" with my Frenchman, but alas, in writing this story now, I can see that he mean't it is not ground while I thought he was saying I don't have to grind! What a difference between an adjective and a verb when you're trying to speak in sign language!
Before leaving the States, many mentioned that the French were intolerant of people who don't speak their language. But we haven't found that to be the case. As a matter of fact, often, as soon as "Bon Jour" leaves our lips, they respond to us in English! We went to buy some stamps yesterday at the post office, and Loren, in his tres chic French asked for ten stamps. I reminded him that we needed twelve, so he said, "Si vous plais, deux mas." The clerk smiled and said, "Deux plus, mas est espagnol!"
We laughed, and Loren said something about "Oui, oui, est tres complique."
One place where they have not been quite so generous is in the museums which seem to be all in French with no attempt to be multi-lingual for the tourists. Yesterday we went to a very interesting museum in Le Marais. It's housed in the Hotel du Carnavalet. 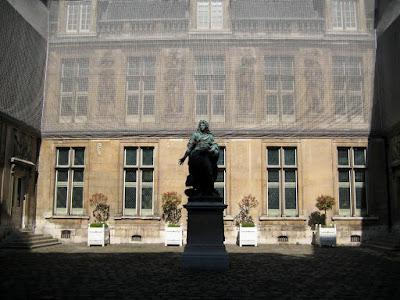 "Hotel" means a very large house, and this house was LARGE! It must have had 50-60 rooms, and I couldn't help wondering what a single family did with all this space. The museum was arranged so that you moved from room to room in a chronological history of Paris. There was a 3-D model of Le Ile de Cite as it was in the very early times with huge reinforced walls surrounding it to protect it from attack. There were early pictures of the very 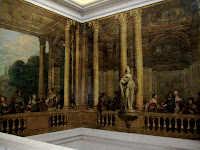 bridges we have crossed, made of wood; some with 35 houses built across the span. There were rooms set up to show the furniture, art, procelain and general life-style of the various centuries. It was quite interesting, and it clearly showed the enormous power and wealth of the church and the royalty. It is no wonder that the revolution happened!! 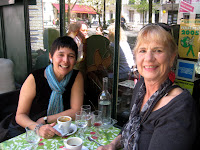 Then I had lunch with my friend, Barbara who just happened to be in Paris at the same time. I had met her in San Francisco where she worked for the Canadian Consulate. She is now with the Embassy in South Africa. We found a lovely little cafe in a square. It was a gorgeous day, and we sat outside and had a leisurely three hour lunch together over a carafe of wine. She thanked me for taking the time to meet with her what with all the things I had unseen on my "to-do" list, but I told her that sitting there on a beautiful April day in Paris; eating blood pudding and drinking French wine, surrounded by French people was every bit a part of my Paris experience as visiting Notre Dame. Because of her work with the Embassy, Barbara speaks fluent French, and she was able to engage our waiter and help me with the menu. The blood pudding, by the way, was delicious!

In the afternoon, we met Glmorita and Geroncio and went over to the Museum of the Deported. It is at the very end of the Lie de Cite, and is a very moving monument to all those French who lost their lives in concentration camps between 1940-1945. 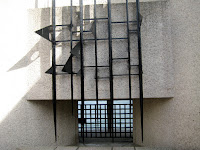 You can see nothing from the upper garden entrance. Going down a narrow flight of concrete steps, there is a beautiful black iron sculpture that makes one think of barb wire placed in front of iron bars that look out over the Seine. 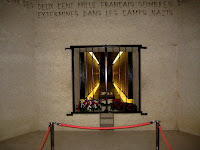 There is a small room with French inscriptions from French writers such as Sartre, St. Exuperay and others which I wasn't able to translate. Then a long tunnel stretched out with small crystals lit up. There were millions of them, each representing one life lost. 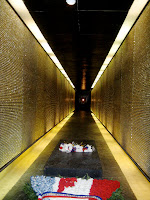 This was not a proud time for the French. The Nazis co-opted the French, and many of the Jews, gypsies, and others were taken away by the French police, not the Germans.


Loren and I had walked along the Seine to and from our various excursions. 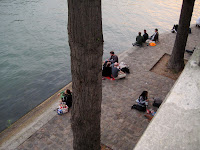 We noted that at night there were many lovers, strollers; and people having picnics along the banks. I put that on my list of things to do. So after seeing the deportation museum, we went down the one commercial street of the Ile de St: Louis, found a charming wine shop, and bought a bottle of wine. Did I tell you that Paris, although exhorbatantly expensive, is the only place I know where a bottle of water costs more than a glass of wine! We brought our bottle of wine to the counter and asked the shopkeeper if he had an opener. He pointed to one that cost more than the wine, so I asked if he had any wine with twist off tops. "Oui," but not French, just Australian. Loren said that would be fine, but the shopkeeper said, "NO! I will open your bottle of French wine for you." Isn't that funny?
We had packed some sandwiches - baguettes, ham and cheese- and we took them down along the river bank. After an hour, Geroncio and I went back up to the corner to buy the famous glace -a special kind of ice cream that sounds som 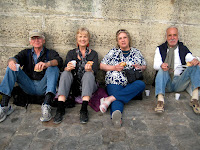 ething like Berhtoulli. I had Moka, Geroncio had chocolate, and we got Praline and Grand Marnier for Loren and Glorita. So picture these four weathered travelers, two from San Francisco and two from Rio de Janeiro, sitting on the pavement in front of The Seine on the Ile du St. Louis, licking ice cream cones. I have no idea what the young people were saying as we plopped our elderly bodies along the wall, but at that moment I was part of Paris!!
We parted company and came back to our flat. It was 9:30, so we decided to have a little more wine out on our balcony and wait for the Eiffel Tower to sparkle on the hour of ten! This is the view from our flat at night. Can you see the tip of the Eiffel Tower in the center, Notre Dame over to the left? The large church to the right of Notre Dame is St. Pauls. 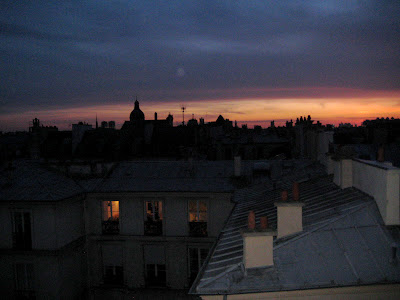 Life is good! Bon Soir.
Posted by nanwebware at 2:15 AM