Happy Thanksgiving!  The ship tried to be festive with decorations, but Thanksgiving on the Grand Princess just wasn't the same as sharing it with family and friends and smelling the turkey roasting in the kitchen.  Don't get me wrong, we had one of our best days at sea- but it didn't feel much like Thanksgiving.  There was a big turkey, cornucopia display in the Piazza, and turkey with gravy, stuffing and cranberry sauce was on the menu for dinner, but...  just not the same! 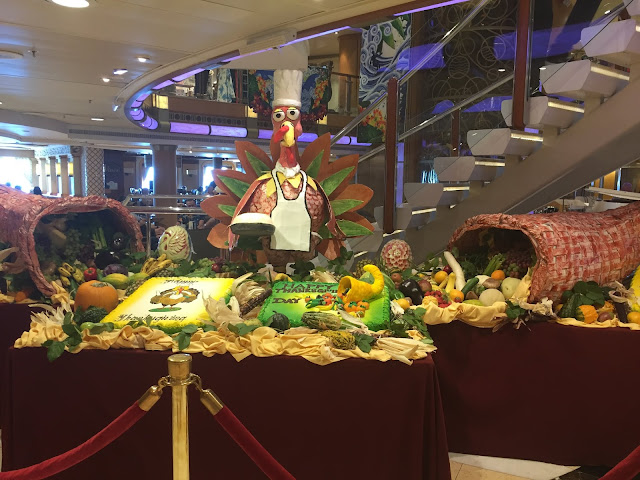 But there was plenty to do.  I went to another line dance class which I really like.  After seeing all those young people up in the disco lounge last night doing line dance moves all together, I'm thinking I might like to try to find a line dance class back in SF when I return.
Then I had my Pop Chorus rehearsal.  We're singing a whole new repertoire of songs:  Blue Bayou, Under the Boardwalk, Edelweiss, Somewhere Across the Sea, and a Beatles song.  We will have another concert on Monday evening- our last day at sea.
Then Luke and I went to a Cha Cha class which was really fun.  We learned a routine with 6 different ChaCha steps in it.  I wrote them down so we could practice!

We had dinner with two other couples, one of whom was from Iowa, so Luke had fun talking to them.  They were from a small town wet of Davenport where they had 200 acres which they farmed with corn and soy beans.  The farm is small and not self-sustaining so they had jobs in town.  He worked in a manufacturing plant and she was an elementary school principal.  They retired at 55 and have been on over 20 cruises!!  Carolyn told an interesting story about her retirement.  The school district was offering early retirement to the principals.  Carolyn didn't know what to do so she prayed heavily.  In the morning, she decided that if one other principal retired, she would also;  she didn't want to be the only one.  So she went off to school and a principal, whom she knew only slightly, met her in the hall and said, "I have something to tell you.  I am going to retire."  She went home and that afternoon her mother called and said, "I have been having a strong feeling all day that I needed to call you.  What's happening?"  Carolyn told her mother that she was thinking of retiring and her mother said, "You should definitely retire!" ... and she did!.

Dick, her husband, was a man of few words, but even though they are both retired, they still work the farm and love it.  They have two children both of whom would like to keep the farm, but neither of the spouses are interested in farming.  So they have put the land in trust and stipulated that they can do nothing with the land until three years after their death. That way they will have to think about it.  The land is worth about $7,000-$8,000 an acre, so with 200 acres it's quite valuable.  Once again here is this average couple from the Heartland who have been on 20 cruises.  They do about two a year.  They've been to Tahiti, Tasmania, Alaska- they've seen the world and intend to continue exploring!  (Only in America!)

The other couple didn't talk much so I didn't get any thing interesting from them!!

After dinner we went to the Vista Lounge to see a Motown concert with the Princess singers, dancers and orchestra.  They were really good with fancy lighting, amazing costume changes and a very talented routine. 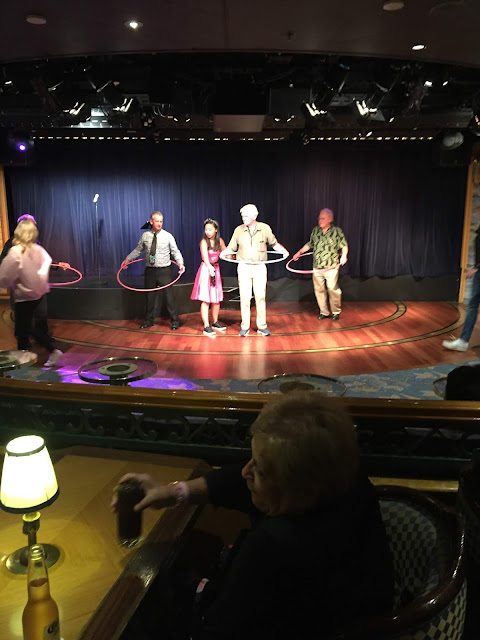 Then, at 9:30, we went to the Explorer's Lounge for a Rock and Roll Party with a different band and the entertainment staff.  It was a lot of fun as we knew all the old songs and there are some very good dancers on this trip.  Some of the old people really know how to rock it!  When the band took a break, they had a Hula hoop competition.  Luke was picked out of the crowd to go up.  He had three tries to keep the hula hoop off the ground.  After the hoop dropped to the ground the third time, you were supposed to stop and strike a certain pose. It was so funny to watch, and HE WON!!  He had no idea he had won, but I think the reason was that we took much longer to pick his hoop up off the floor each time, so he was the slowest and therefore the last to strike the pose at the end!  They interviewed him and presented him with a bottle of champagne!!  I was laughing hysterically!

We stayed in the Explorer's Lounge until the band stopped playing around 11:00.  It was a very fun day.  I wonder what tomorrow will bring!!