We go from tattooed Jon with his love story painted on his body to another unbelievable story over breakfast this morning.  We found a table by the window and were quickly joined by Ryan and Peggy- a lovely couple from Portland.  We chatted for a while, and then they had things to do.  When they left, we were just getting started on looking at the detailed, minute-by-minute calendar of the day's events to plan our day, when another couple asked if they could join us.  We charted our day and then turned to them and asked, "Where are you from?"

"Now, Lafayette, but originally from Iran."  They were a very attractive couple and we immediately got to talking.  They have been on many cruises and have travelled the world.  They asked what we had decided to do today and we listed hula lessons, ukulele lessons, bingo, black jack strategies, line dancing, and then we told them about a very interesting movie called Red Joan with Judy Dench.  We had see the trailer on our TV that told about the day's events and we both said, let's go to that.  It turns out they are big movie buffs and they said they will be there also.

After some interesting conversation, Luke asked them about their country Iran- and that's when the amazing history lesson began.  Mitra's sister had been shot by the Red Guard which was the end of Iran for her family.  It was so devastating.  Mitra is a Muslim because anyone born to a Muslim father is Muslim.  But no one in her family embraces Islam.  As a matter of fact, she despises the Islamic religion.  Back centuries ago, Iran was invaded by the Islams, forbidden to follow their Zorastrian beliefs and subjugated.  Mitra and her husband, Fred (Feodoro) grew up in a beautiful country, rich in natural resources and beauty, run by the Shah of Iran, Reza Pahlavi who had established a Constitutional Monarchy and replaced Islamic laws with Western ones.  He also forbade the wearing of traditional Islamic clothing, separation of the sexes and veiling of women's faces.  When it became clear that Prime Minister Mohammad Mosaddegh was corrupt and wanted to establish Shia law, Pahlavi fired him.  That influenced Mosaddegh to begin the coup-de-etat that eventually ousted the Shah and brought in the Islamic rule of  Ayatollah Khomeini.

Both Mitra and Fred have been in daily contact with friends and family in Iran and they are very hopeful that the demonstrations that have been happening over the past four days will result in the overthrow of this horrible, despotic regime.  And here is the interesting thing for me - they both say that Trump has done the right thing.  Trump, by withdrawing from the nuclear ban treaty with Iran and thus imposing new and stronger sanctions on the country has weakened the regime.

But wasn't it a bad thing to withdraw from the disarmament agreement?  No, they said.  Europe and the US had dropped the sanctions of Iran, thus giving this regime a lot of wealth. Fred said, "Iran is the head of the snake."  He said all the Islamic terrorists are funded by Iran.  Iran runs an incredible drug trade of opium and heroin through South America into the USA and Canada.  But our sanctions are weakening this regime and bringing it to its knees so that the people uprising might have some power.  He further added that Europe wants to lift the sanctions because Europe has nothing- they have no natural resources and depend on Iran for many resources.  Europe has a lot of money tied to Iran, so they want a more robust Iran to exist.

It was so fascinating talking to this couple, and I hope we'll see them again.  To think an Iranian woman despises Islam and thinks the Trump is doing the right thing... OMG!  I'm going to doubt everything I've ever believed.  The world is topsy-turvy and so am I!

By the time we had finished our conversation with Mitra and Fred, Luke had missed his blackjack lesson and I had missed my line dancing, but I think they will be repeated again.  Loren went off to play Bingo and I went to my ukulele lesson. 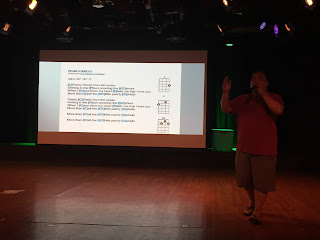 There were probably 100 people at the ukulele lesson and they had big bins filled with ukuleles for us to select.  Brian and his wife Rowena taught us four chords and then we played two songs.  Because of my previous lessons and practice, I knew all the cords, but there were a lot of people there who had never picked up a ukulele before and it was so much fun to hear 100 ukuleles playing together.  I'd like to go back tomorrow, but it conflicts with a Pop Choir which I also want to check out!!

It turns out that there was a $35.00 charge just to play Bingo, so Luke bailed on that, but he did go to the Hulu Dance Class.  He just watched - which I'm sure is why he went, but he says he's going tomorrow and will participate!  Then we went to the theater, an amazing venue, where we watched the British movie, Red Joan, starring Judy Dench.  It was a great WWII movie based on a true story- a great one to see if you haven't already. 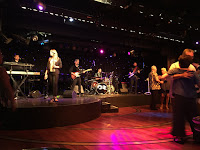 After a short lie-down, we changed our clothes and were off once again for some pre-dinner dancing at the Wheelhouse Bar where the Pacific Trio was playing music with a Mexican singer.  We sat next to a couple who introduced themselves as Miriam and Joe.  Miriam, from Cuba, was in her mid to late seventies (maybe older).  She had long, dyed Jayne Mansfield the hair, false eyelashes, painted eye brows, and a diamond rock on her finger that made me think maybe the Poor diamond had been transferred to her.  Joe looked Phillipino and was covered with gold: necklaces, rings, and a gold watch that looked like it weighed at least ten pounds.  They were wearing matching outfits.  Joe was in white pants with a white shirt with a blue flower pattern.  Miriam was in a white dress with a panel that matched Joe's shirt.  She was also wearing white spiked high heeled shoes.  And they were very good dancers!

The dance floor was crowded, mostly with couples over seventy, and there were some pretty swift and professional looking people - light on their feet and having a good time.

Then we went to dinner where we shared a table with two other couples.  Tom and Margot were from Tampa, Florida and Sandy and Sal were from Sparks, Nevada.  Sal still works, but his wife, Sandy, gambles.  Sparks is just a town away from Reno, and Sandy bets on the slots whenever she gets bored, which I gather is quite a few days a week.  If you win over $1199.00, you have to report it and the casinos won't let you leave with your money unless you can show a driver's license and a social security card.  Sandy wins big so much, that she reported her social security card missing so she could have an extra one to carry with her at all times.  Ten years ago she won $14,000, and last year she won $11,000).  $600 - $1,000 is a typical day!  Luke of course was very interested in how Sandy did this, and Sandy gave him some helpful hints.  Hopefully our dinner conversation will pay off because Luke didn't fair well in the Casino when he strolled through this afternoon!! 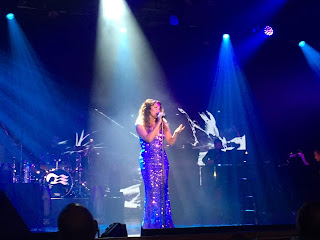 Right after dinner we meandered up to the theater to see the show.  Jennifer Singer did a concert singing songs from Carole King, Barbra Streisand, and Tina Turner among others.  I thought she was very good and really enjoyed her, but at one point I looked over and Luke was sound asleep!!

From some of the pictures you should be getting an idea of some of the spaces on this ship.  I truly is remarkable.  Here are some more views:


So far the weather has been quite cold so we haven't been able to sit out on the balcony much.  I'm hoping, as we get closer to Hawaii, it will begin to warm up.

The seas have also been a tad rough, so that I'm looking a bit drunk every time I try to walk somewhere.

This was only our first full day at sea and it was very interesting and a lot of fun.  I am fascinated with all the different people, and look forward to peeking into the lives of many more to come.

Posted by nanwebware at 6:41 AM

Thanks so much, Nance, for taking us along on your journey. Your conversation with Mitra was fascinating. The world is indeed complex and far from black & white. Keep reminding us of that💕