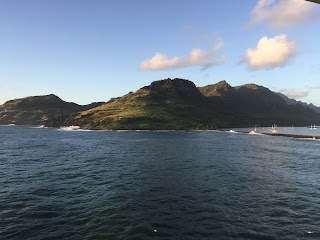 I love waking up early and going out on the balcony to see how close to land we are.  Around 6:00 there were lights in the distance and then by 7:00 we were entering the harbor of Kauai and were greeted by a beautiful, lush green uninhabited mountain.  As we started to snuggle in to the dock we were serenaded by three ukulele players and a hula dancer.  It was beautiful.
After a leisurely breakfast we disembarked and decided to walk the 1/2 mile to the beach.  Kauai apparently has the fewest tourists visiting it, and I think it's because  there aren't as many beaches.  Most of the coastline is very steep, but near the harbor is a lovely beach. 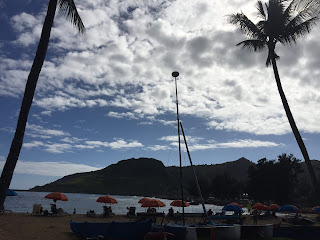 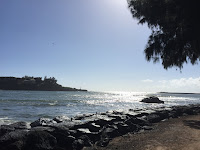 We decided to get on an on-and-off bus to tour the island and get a sense of the lay of the land.  We were told to take a public bus to a certain shopping mall and get our tour bus from there.  However, along the way, someone was getting off at the Kauai museum, so we got off to check it out, and we ended up staying there for over an hour. 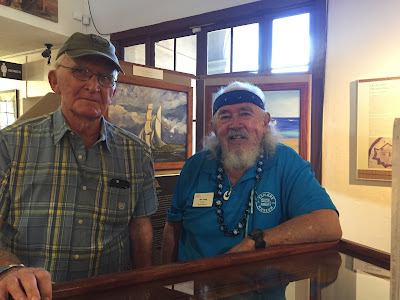 We met Jim Jung right away and when he found out we were from San Francisco, he said, "I have a San Francisco story for you."  Jim had been a layer in Boston and came out to San Francisco to work with Melvin Belli.  Melvin was known as the King of Torts.  One day, Melvin met up with Carol Doda, a lady of renown known for her topless attire.  For a long time there was a likeness of her in neon lights flashing along Broadway near North Beach.  Carol poured Melvin a drink and raised her glass and said, "To the King of Torts from the Queen of Tarts!"

Jim ushered us in to a small room where he was giving a lecture on the Hawaiian migration and how the islanders got from Micronesia around 1100.  He had a replica of a canoe that was used, and it was really fun for me to hear all about the early settlers because I had just finished reading about that time in my James Michener book, Hawaii.  Jim was quite the storyteller.  Another memorable phrase he quoted was from Christopher Columbus who said, "You can never cross the ocean until you have the courage to lose sight of land."  And these early Islanders certainly had a lot of courage.  Another interesting fact I learned is that the Hawaiian Islands are the most isolated land mass on this earth.

By the time we had finished looking around the museum, it was much to late to take the on/off bus, so we asked the gal in the gift shop if she could recommend a nice place for us to have lunch.  When she said, Duke's Barefoot Bar and Grill, I knew that was where I wanted to go, so we got back on the bus and went over to the harbor where we found this great place.  It was right on the beach and we sat outside under thatched umbrellas.  I ordered car and macadamia nut won tons and a man tai, and Luke couldn't resist the Hula pie which was the biggest thing I'd ever seen! 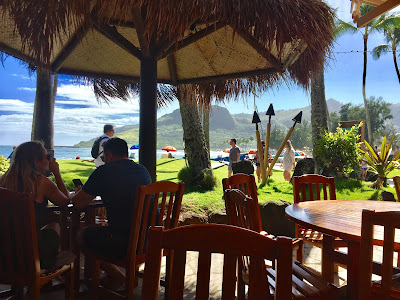 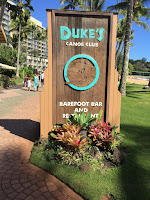 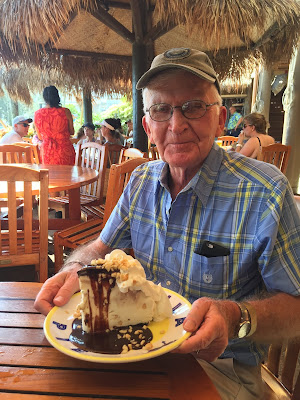 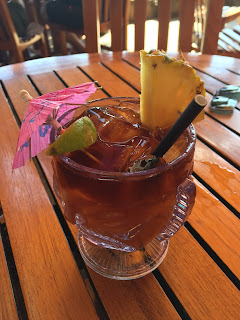 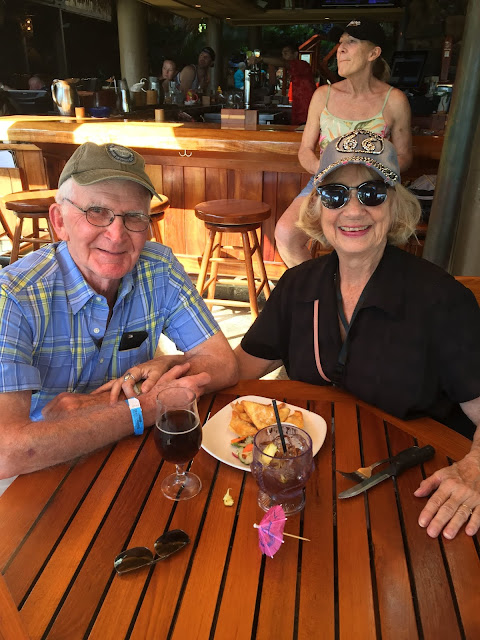 We came back to the room and took a short snooze.  When we woke up, the ship was just leaving.  A tug boat was following along side, and we saw some beautiful condos, a golf course and two very picturesque light houses as we glided out of the harbor. 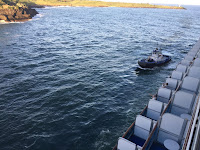 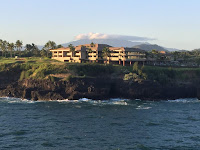 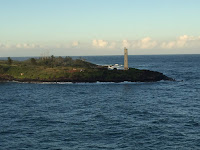 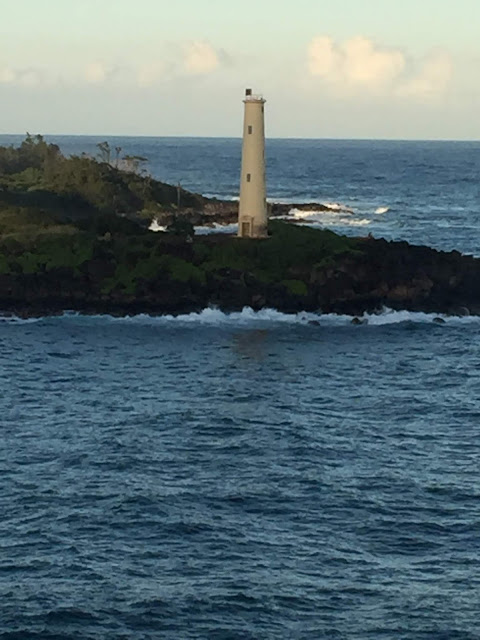 We really loved Kauai.  It resembled our idea of what Hawaii should be - more than Hilo or Honolulu.  We really didn't get very far, but what we saw was lovely.  I'd like to go back sometime and explore some more.  It's on to Maui tomorrow.

Posted by nanwebware at 1:07 AM

I love your blogs...each with a story that me travel with you. Where do I go next? Such fun to wait for the next port.