I was so excited to see how we would come in to port that I was awake from 4:00 on!  We have had to put our clocks back two hours since we left San Francisco.  I talk to my sister in Florida every day and now there is a five hour difference- that's hard to fathom!  It turns out that we weren't due into Hilo until 8:00, so I needn't have worried about missing it.  Around 5:00 am I could see lights in the distance. 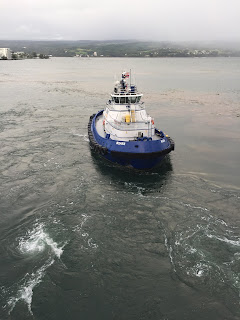 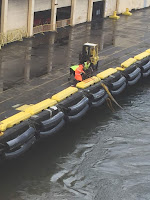 It was a very overcast, humid morning and around 6:00 it started to downpour.  A large tug boat appeared off of our Portside balcony and we turned in towards the harbor.  This ship is enormous, and she just slowly snuggled up to the dock as people on the land caught the ropes.  There is quite an orchestrated dance that began after we were tied up.  Two gang planks emerged with signs and awnings.  The dock began to get peopled with tour agents and photographers and the disembarkation began. 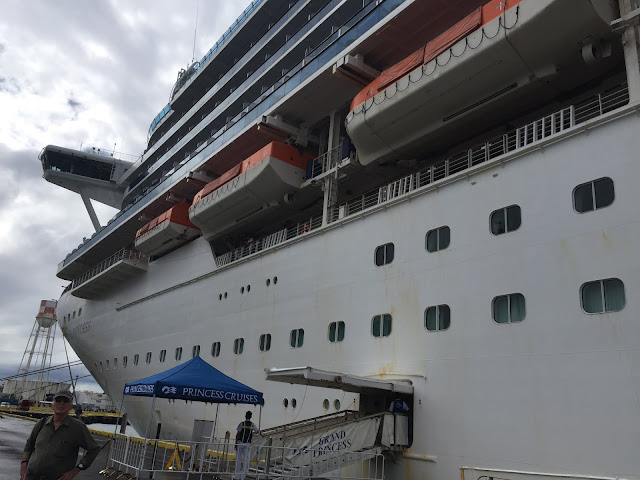 We hadn't signed up for any tour, so we went back up to have some breakfast.  Once again our system worked.  We were joined by a couple from Oregon- Craig and Laurel.  Once again they offered a lot of information about themselves:  They have been on 27 cruises-Mexico, Panama Canal, Tahiti, Dubai, Bombay...etc, etc., etc.  She has macular-degeneration and has been getting shots in both eyes for ten years with a drug that was affective for cancer but found to deter macular degeneration.  They have very good insurance and only pay $20 each time she gets the shots which is every 5 weeks.  They have one daughter, and just days after they retired, her daughter announced she was getting married.  That put Mom into overdrive and she made all the bridesmaids' dresses from scratch.  Then her daughter, who never liked kids, had a son, but the daughter wanted to go back to work, so Mom took care of the baby.  Then the daughter announced she was having triplets!  Needless to say, that upped the ante and the mother moved in with the daughter.

I asked the how they ever had time to take 27 cruises and they said that Laurel's best friend got breast cancer 30 years ago and was dead in 3 weeks.  At that point, Laurel vowed she wouldn't wait until they retired to travel and have fun, so their cruise adventures go back a ways.  Then,  whenever her daughter could get vacation time, Mom and Dad went on a cruise.

We got all this, and guess what?  They never even asked us where we were from!  Luke thinks maybe we're not very interesting people so no one needs to ask...  I think there are many people who are just interested in themselves.

Craig and Laurel left and we were shortly joined again by a mother and her daughter from Lake Placid.  The daughter had been on about 8 cruises with her husband, but she left him home this time and she brought her mother on her very first cruise.  The mother, who must have been in her 70's, was having a great time, although yesterday she fell coming down the marble staircase in the Piazzo.  she was alright, and later in the day she received a beautiful, large bouquet of flowers from the ship with a card saying, "Hope you are feeling better."
While we were having breakfast, the clouds cleared and it looked like it was going to be a lovely day, but when we got back to our room, it was raining again.  Since we weren't in any hurry, we read for a while.

Around 11:00 the sky was clear again so we decided to venture forth.  We found a free shuttle that took us to the Farmer's Market in downtown Hilo.  We had been told that this side of the island is the "poor" side and the other side is where the volcano National Park is with luxury condos and hotels.  The Farmer's Market was full of Hawaiian things like jewelry, t-shirts, dresses, flowers and shawls.  There was also a section with just food and we saw some very exotic fruits we had never seen before. 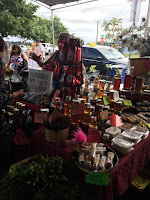 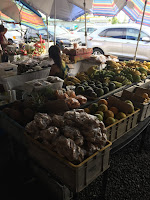 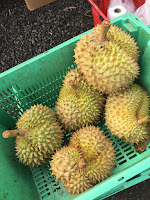 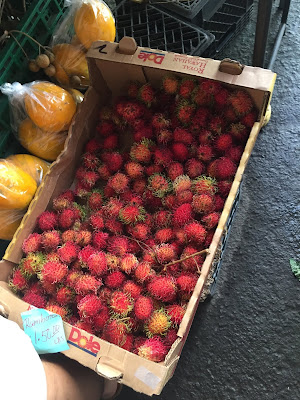 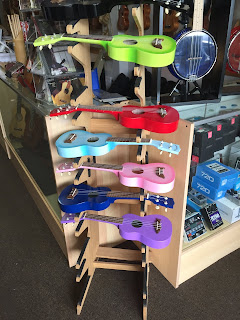 We went into a Ukulele store and asked if they carried Kamaka Ukes- this was the kind that Luke had been given from his co-workers when he retired and we were told it was one of the best ever made.  They said they didn't have any Kamaka's in the store- They had ordered some, but they wouldn't be there for three months.  Luke asked if they were indeed the best made and the woman told us that they were the oldest man-made company, but until recently when they re-toooled their design, her husband couldn't play one because the neck was too small.
We were going to go to the botanical gardens which sounded quite lovely, but the clouds rolled in again and we got back to the ship just before another heavy downpour which lasted for most of the rest of the afternoon.  It was actually quite nice to go back to the room and read and relax.

We ran in to Sheri and Jon as we were leaving breakfast and made a date to meet them in the piazza at 6:30 and have dinner with them.  I don't think I mentioned that Sheri is writing a book.  She has a fascinating history- her father was a Grand Sergeant in a Motorcycle gang before both he and Sheri's Mom became born again believers- so needless to sa she had an interesting childhood.  Then she trained to be an investigator, so she has a background in the crime world.  She's writing a book called The Deliverer and she had the first 20 or so chapters bound and gave us a copy for us to read and give her some feedback.  It is really very good- a kind of Criminal Minds combined with what reminds me of an English crime series.  The evil in it is very deep and the main character is Kate who is a detective and we discover her mother had been brutally killed.  It was really fun for us to be let in on the beginnings of Sheri's adventure and she is going to send us installments as she finishes them so we can see the story unfold- so long as we continue to give her feedback.

We had told Sheri and Jon that it was my birthday yesterday, so when we met up with them they told us they had made reservations at the fancy Crown Grill and wanted to take us there for my birthday.  I should have revealed right then that it really wasn't my birthday, but I didn't think about it because I really feel this whole cruise IS my birthday.  This is my birthday present and I'm still celebrating.

At any rate, we had a wonderful dinner, and I will be thinking of our conversation for a long time to come.  Sheri and Jon run an educational training service for businesses and I can understand why they are successful.  Sheri has a wonderful way of turning a topic of conversation into a lesson learned while telling a wonderful story.  For instance, he talked about three levels of relationships;  she mentions we have 22 states of emotions;  and she said curiosity is the basis of love. There is so much of this dinner conversation that I want to revisit.  And guess what?  They were interested in our lives as well, so we felt a lovely two-way street of sharing.  At the end of dinner, the waiters showed up with two cakes for Sheri and me and they sang Happy Birthday in harmony!  It was so much fun. 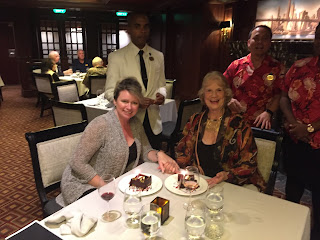 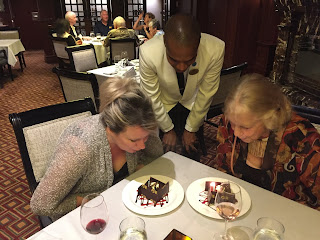 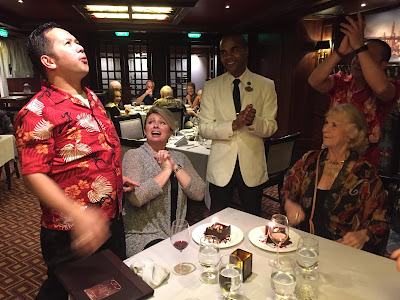 Tomorrow we arrive in Honolulu which will be a very busy day for us.  We have signed up for the tour of Pearl Harbor and we are also going out for dinner with Luke's college friend, Phil who lives here with his wife.  Aloha for now.

Posted by nanwebware at 7:50 AM