Getting Our Sea Legs

We're getting our sea legs, finding our way around this mammoth city, and are trying to figure out the demographics of this sailing.  It is mostly older folks with a smattering of younger people and not many children.  There are a lot of canes and walkers and we even saw a service dog when we were boarding.  The people come in all sizes, but the women win the prize for being the largest.  And it is a pretty white crowd with very few African Americans.  They seem to come from all over the United States, but so far we have only met Americans, and many of those we have talked with are from the Bay Area.

So yesterday our internet went down, so I am writing this on Thursday morning.  Yesterday we went for our breakfast and again found a table for four by the window.  It wasn't long before two sisters asked if they could join us.  Phyllis, the older, was from Nashville, TN and G.R. lived in South Carolina.  Just the night before Luke had commented about how few African Americans there were, and here we were joined by two African American women for breakfast!  G.R. was quite a talker, and
she had a lot to say.  She had worked for the U.S. Postal service, spoke four different languages (English, Spanish, French and Portuguese) and had traveled all over the world.  She held about every job you could hold in the Post Office and worked her way up to management where she was just beneath the Post Master General.  Now she was living on OPM - Other People's Money!!  She said the Post Office was a wonderful place to work and has incredible benefits for their employees.  When she got in to management, she had her choice of going to Stanford or MIT for one year to get her MBA.  She chose Stanford- and her tuition and room and board were paid for by the US Postal Service.

Phyllis was quieter.  She started working for the IRS and became very good with computers and eventually ended up in private industry in the IT department.  G.R.'s husband had just died three months before and it was really nice to see the two sisters obviously supporting each other and having a good time.  G.R. was going up to the spa to have a hot rock massage, and her eyes lit up when she mentioned it!

We have so enjoyed our conversations with other people and it has been fun to run in to them throughout the day and greet each other as if we were old friends.

There weren't  as many activities that drew us in as there were on the first day, but I joined a chorus which was a blast.  They had met the day before, but that conflicted with my ukulele lesson, but they allowed me to join up even though I had missed the first rehearsal.  We are practicing six songs that we are going to perform on the Piazza on Friday afternoon.  Today we practiced The Eye of the Tiger from the Rocky movie and It's Not Unusual.  We will have two more rehearsals before the concert where we'll go over Sweet Caroline, Isn't She Lovely and The Love Boat (which I don't know!). Stay tuned- I'll let you know how it goes.

Luke went off to a hula class lesson where he learned how to tell a story with his hands.  In Hulu, the men move their hands very differently than the women.  He said it was fun, but he wanted a little more hip action.

We went up on the foredeck of Deck 14 to get a piece of pizza and play banangrams.  There was an outdoor film showing with Angela Lansbury and Elvis Presley- It was quite a scene with people lying in their deck chairs around a beautiful pool watching an outdoor movie.

Last night was the first of three formal evenings, and the big event was a reception with the Captain and a champagne tower with free champagne for everyone.

There's a longer story for another time, but Luke was prepared for formal evenings. 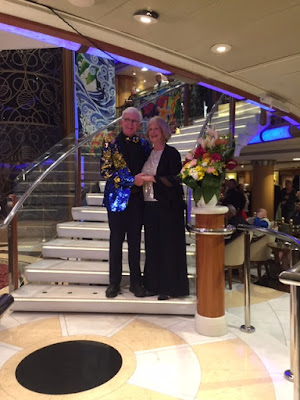 He had bought himself an evening jacket like no other that he spied one day while walking down Market Street.  He dresses up quite well, and he was the hit of the evening.  Every where we went people would say, "Love that jacket", "Nice jacket", "You look terrific!"  It was definitely a chick magnet- women were coming up and stoking it and petting him.  I think it got a little much for the humble, shy guy from Iowa - he doesn't like the spot light drawn to him.  But he WAS the spotlight and I told him if he was going to what something like that he had to get used to all the attention!  It was really fun seeing all the women in their finest, and there was a lot of bling going around- but Luke definitely won the prize! 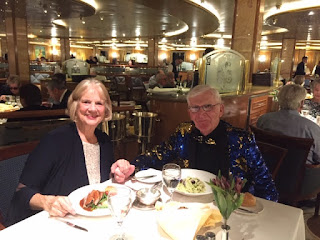 We had dinner at the daVinci restaurant and it was lovely.  Everyone in the restaurant was dressed up - that was a requirement if you wanted to eat in certain places.  After dinner, we went to the evening show in the beautiful theater where the Princess orchestra and the Stardust singers and dancers regaled us with "Memories," old songs that everyone knew.  The performers were very professional and it was a delightful evening.

We went back to the room to change - I think Luke needed a respite from his attention-getting jacket! We turned on the debates for just a little bit before we planned to go dancing to close out the evening.  The next thing I know, Luke is waking me up saying, "I guess we'll go dancing another night!"

We just finished a long breakfast with Tess and Peter, two Brits who are only on the cruise in order to get to Hawaii.  They are quite tired of the sail and are looking forward to getting to Honolulu where they will go to the Pearl Harbor museum- their main reason for coming to Hawaii.  I asked if they didn't like cruising, why didn't they fly to Hawaii, and they said they flew non-stop from London to San Francisco, and are using the cruise to adjust to the time change!!

Peter was so very British.  He and Tess are "leavers" and think the EU is corrupt and taking from England.  "What would happen to a U.S. company who hadn't had an audit for 20 years?" he asked us.  Well that is the EU.  Britain will be much better off on their own, controlling their own borders.

Peter and Tess are from Durberville-  (Tess of the Durbervilles!!). They live near the house were Thomas Hardy wrote his novels.  Just down the road from them is Julian Fellows, the author of Downton Abbey, who they say is a delightful fellow.  Peter says Camilla is the most misunderstood duchess and she is brilliant.  Tess is dubious about Meghan Markel, but Peter is a big fan.  They both are a little hard on Harry, saying he's a troublemaker.  Tess really liked Diana;  Peter thinks Charles should have married Camilla right from the start and never should have had anything to do with Diana.

It was really fun listening to these two talk in their very proper English about primigenesis, the House of Lords, the Queen-whom they adore, and Peter's volunteer work with the Society of Something or Other of Dorset County.  Very proper folk these two.

Because of our long breakfast conversations, we tend to miss some of the activities we had originally planned to attend.  We didn't make it to a lecture about Kauai, and we missed a Ballroom Blitz class on the Cha Cha.  So we went to the aft deck to read for a while.  It has gotten considerably warmer and we both found ourselves dozing off a bit in our lounge chairs- ...oops! We missed the line dance class.  I did make it to my Pop Choir Rehearsal where we went over all the songs we are going to sing in our concert tomorrow afternoon.  Then I got back to the room to find Luke sitting out on our balcony having a high noon glass of wine!  We went down to the piazza where we split a margarita pizza and listened to a wonderful mariachi band.  Then, since the weather was nice, we decided to walk the entire length of the promenade.  The ocean was a gorgeous cobalt blue, and it was really lovely to be out for our deck stroll. 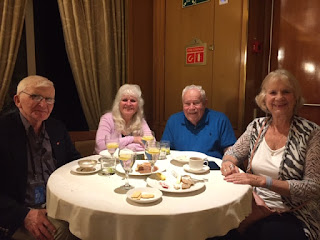 We were invited to dinner by Alice and Chet from San Jose whom we had met on the first night.  They have a reserved table every night in the same restaurant.  They are also seasoned Princess travelers and get the full alcohol package free and all gratuities free, so they very generously treated us to wine with our dinner.  We have chosen the "Eat Anywhere/Anytime" plan because we thought we'd like to go to different places and meet different people and not be locked in to just one restaurant.  The advantage of the plan that Alice and Chet have is that their waiter becomes their personal friend/assistant.  Renaldo knew the wine they liked, and was very friendly and attentive to us. 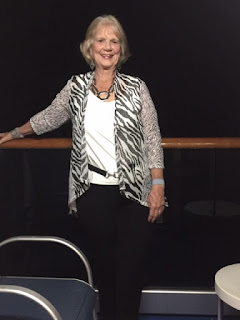 Before I close, I just want to put a shout-out to my friend, Shirley.  Whence found out we were going on our cruise, she called to tell me that she had a slew of clothes that she'd love for me to borrow.  At first I didn't take her seriously, but when she reminded me that she had older brothers and no sisters and she really wanted to have a dress-up-try-on time with a "sister" I took her up on it.  I went to her house in Walnut Creek for a very fun afternoon trying on all sorts of things.  It was so much fun because Shirley and Charlie travel quite a bit and she had all sorts of outfits that were beautiful but you could wad them up in a ball and they would stay wrinkle-free!  The great part was that Shirley and I are the same size!  I came home with about four different mis and match outfits, and I have to say I'm having so much fun deciding what to wear each night.


After dinner we had a little time before we were planning on going to the Country-Western dance.  Needless to say, we lay down on the bed and this time Luke was the one snoring first.  I think the free wine at dinner had something to do with it!  We're going to have to either resign ourselves to missing out on the late night happenings, or find some better system for staying awake.

Aloha, for now.
Posted by nanwebware at 7:34 AM

Beautiful picture of you by the railing and a great outfit!

Mel and I read your blog out loud at dinner tonight! We love getting a brief taste of your adventures out on the high seas!