It is such fun waking up and going out on our balcony to see lights of the next island twinkling ahead.  The city of Honolulu is vastly different from Hilo with its hi-rise buildings.  There were other ships in the harbor, but none the size of this mammoth thing that we're on! 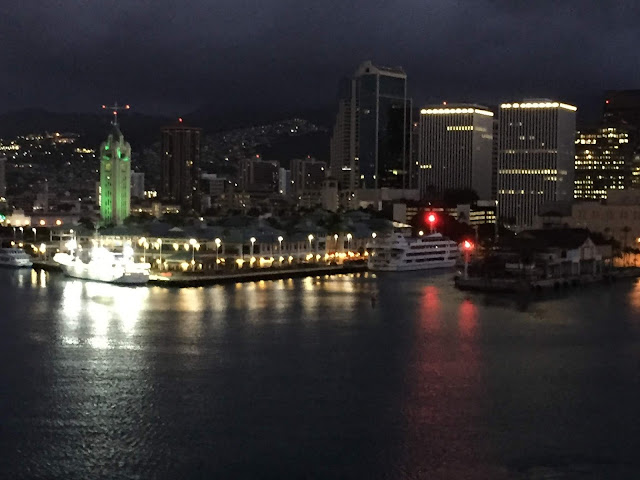 We had to be aware of the time this morning as our tour for Pearl Harbor left at 8:00.  There must have been over 25 different tour groups going to various places and the ship had it down pat.  We were issued a sticker, ushered into groups and led to our particular van.  We were first driven to the Pearl Harbor National Memorial where we got a head set and walked around to the various exhibits while Jaimie Lee Curtis led us on a tour.  Her father, Tony Curtis, was on the USS Missouri when the peace treaty was signed with the Japanese.  Afterwards we went in to a theater and saw a film about the fateful day of December 7th. 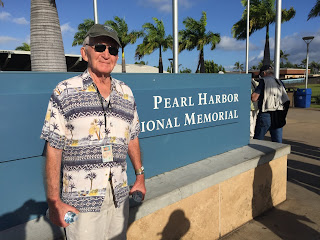 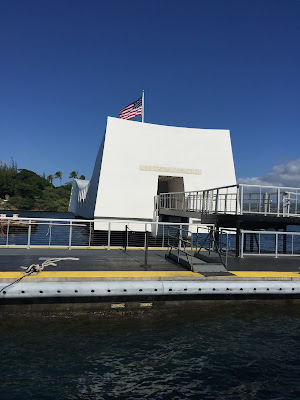 Then we got on a launch and were ferried over to the USS Arizona by two Navy sailors.  The Arizona was one of only a few of the battleships bombed on December 7th that were not raised and repaired and brought back in to battle.  When the Arizona was bombed it ignited the fuel tanks onboard and the explosion destroyed the ship.  They have erected a very beautiful memorial over the wreckage, some of which can still be seen from the surface.  The men that went down with her are still buried below and many of the crew who survived have chosen to be buried with their fellow sailors after they die. 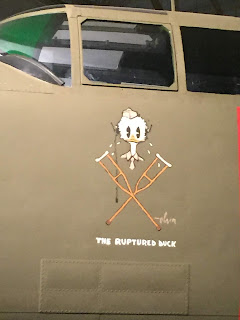 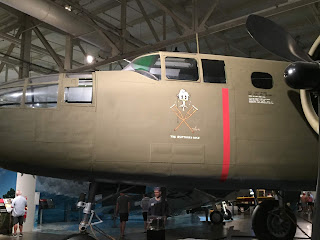 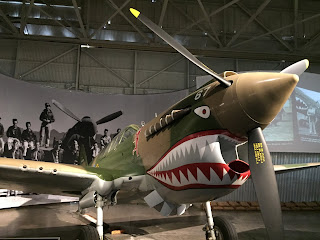 Seeing those planes up close gave you a sense of just how primitive and dangerous it was compared to war today.  I can't imagine dive-bombing enemy ships in these flimsy planes with open cockpits as the enemy guns are shooting at me.   It was a long day, from 8:00-2:30 and we were very glad we went, but all in all I was under-whelmed with Pearl Harbor.   I think I was expecting to be more emotionally moved and I wasn't.

We came back to our room and had a short turn-around time before we were to meet Luke's college friend, Phil, who lives in Honolulu with his wife, Liz.  We met them at Nico's restaurant and had a wonderful dinner with non-stop conversation as the two men caught up after many years.  Liz was born in Honolulu and remembers Pearl Harbor.  She lived in what she called the Pineapple Camps, and the Japanese flew over and strafed her village with a barrage of bullets.  Her family was Korean and they had no love for the Japanese, and she remembers her mother and father cursing the planes as they flew overhead.  Phil and Liz drove us back to our waiting ship and we were both asleep before the Grand Princess left port.  Kaua'i is next, we'll be pulling in to Nawiliwili around 8:00 in the morning.   Aloha. 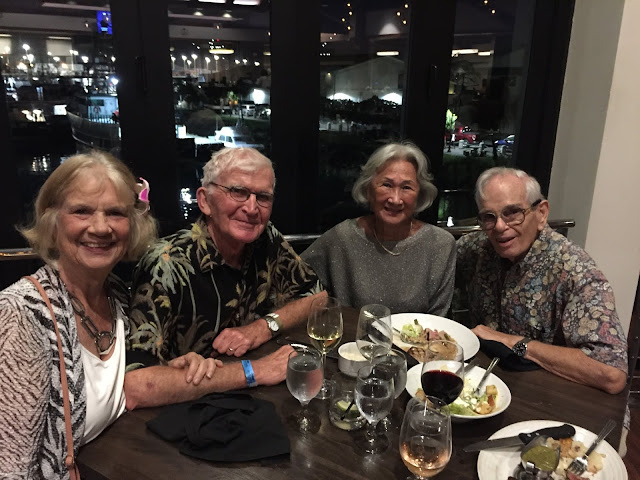 Posted by nanwebware at 9:18 AM