I'm not sure that I'm looking forward to landing in Hilo tomorrow.  Of course I am, but I haven't tired of being on this ship, and there's a part of me that just wants to stay on board and never get off.

But today is going to be a fun day.  Before we set sail, Princess asked if there was anyone celebrating a special occasion.  Since this whole trip was Luke's birthday present to me, we decided to say it was my birthday.  We had to pick a day that we wanted to celebrate and we picked today.  So as I was leaving to go get our morning coffee, I found a birthday card under the door and a big poster stuck on to the door wishing me a happy birthday.   Very nice! 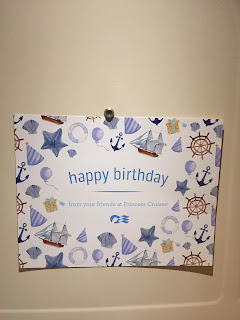 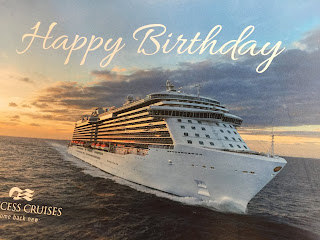 We have developed a little routine for breakfast.  We like a seat by the window, so we walk along the aisle looking for an empty table, and then wait for a couple to ask if they could sit with us.  This morning we were joined by Nancy and Randy, a couple from Oregon.  They have just become Elite Princess Passengers having gone on 17 cruises.  Luke asked what they got for their new status and they said their refrigerator in their room was stocked with wine, beer and champagne and they got free laundry service!!

We learned a lot about Nancy and Randy.  They have two daughters.  Randy used to ????? but then when his grandson was born with six fingers and six toes on each hand and no separation between his heart, he was so taken with the care that he received that he decided to train to become a pediatric pulmonary technician so he could make a difference.  The smaller premie he saved was Joshua, who weighed 12 grams at birth.  Joshua is now 20 years old and has seizures and is partially blind, but other than that he's doing okay.  Randy also has lost 130 pounds since March.  He had the gastric by-pass surgery and can only eat one cup of food at a time.  A side effect of that kind of surgery can be that your gallbladder fails, and just before coming on the cruise he had his gallbladder removed because it was looking cloudy.  He also has a pinched nerve in his neck and he went to an acupuncture class that was given by the spa here on the ship and they told him that pinched nerves respond very well to acupuncture.  The course of treatment costs $1,400 and he's doing it daily and his pain is much less.  His wife, Nancy, said, it is very expensive, but so worth it if it will take the pain away.

I am sharing all this information with you because Luke and I have noticed that for the most part, the people we have met are real talkers, but they mostly talk about themselves.  Very few have been interested in us or asked us questions about our lives.

After breakfast I went to the line dance class.  That is so much fun.  We learned two dances, one to a Megan Trainer Song and the other to Footloose.  It's a great workout and everyone is having a great time. 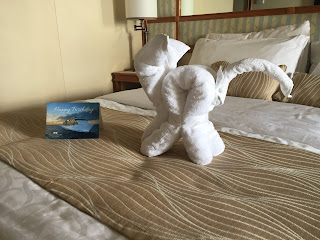 I came back to the room to collect Luke and found another birthday card and an elephant, created out of towels that Roberto, our cabin boy had made for me for my birthday.  We say him later in the hallway and thanked him so much.  We asked if he went to towel folding school to learn how to do that and he laughed.  Luke asked him how long it took to make the elephant and Roberto said only 15 minutes!  Amazing.


We hadn't been to a restaurant for lunch yet- instead -picking up a slice of pizza or sandwich at an outdoor kiosk.  Today, Luke wanted to try our breakfast routine on the lunch crowd.  We have both affirmed that the most fun on this cruise are the people, so we left for the dining room in search of some new characters.  This time we didn't find an empty table so we had to shake up our routine a bit and invite ourselves to join another couple.  Ceci and Carl were from Arizona and they were a really fun couple.  When we said we were from San Francisco, Carl said, "I've been reading about your city and seeing it on the news, and it's not good."

When I asked him what he had been hearing. he cited the homeless problem with waste in the streets and used needles on the sidewalks.  It's really too bad, because we have to own up to those issues, but the press makes it sound like the whole  city has gone to seed.  Homelessness is a huge problem, and I don't know the answer to it, but SF is still an amazing city and we feel very lucky to be able to live there.

Then Ceci asked, "Isn't Nancy Pelosi helping the homeless?"  I really didn't know what to say to that question!!!

After lunch I went to my Pop Chorus rehearsal.  It went very well and we're doing much better.  Our Director says we are ready for our big public concert this afternoon.  We are all to wear tropical, colorful dress.  The lady next to me said she didn't have any tropical clothes.  I asked her if she had anything with flowers on it.  "No, I'm not a flowery person."  So I said, "Just wear your brightest color."  She was dressed in a brown/olive green dress and I can't wait to see what she shows up in for the concert! 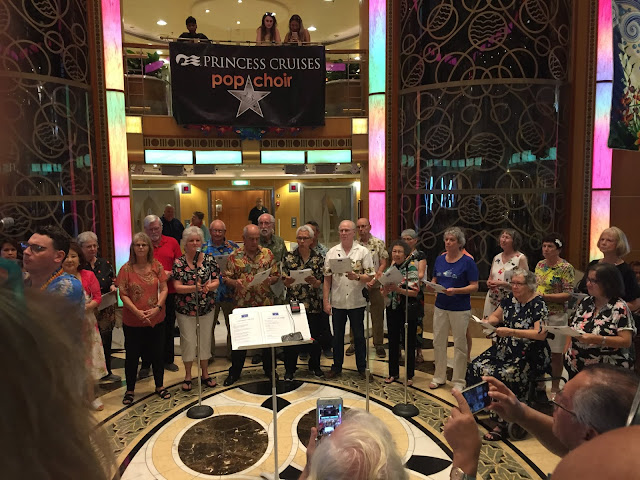 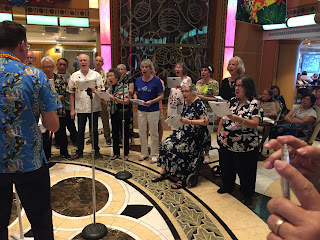 Our Director, Jonny, from South Africa, got the crowd going, and our first song, The Eye of the Tiger got rousing applause.  Our next to last song was Sweet Caroline, but Johnny said it was our last.  So then the crowd started yelling, "More, More, More!!"  and then we sang The Love Boat!!-  It was so much fun.  We were given pins that say, "Princess Pop choir" on them, and were treated to champagne and mimosas in an adjoining bar.  They are going to have another choir on the sea days on our way back.  I'm definitely going to join and I'm going to try to get Luke to come too.  By the way, the drably dressed lady is the one sitting in the walker in the front row on the right.  I told her she looked lovely in her flower dress, "but I thought you didn't have any flowered clothing."
"Oh, she said, I bought this in the shop so I could look tropical."  I told her she looked lovely and should wear more flowers!  This might be the start of a new life for her! 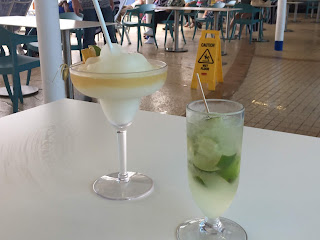 We decided to celebrate the success of the concert and went up to the top deck and had a caipirinha and a margarita-  the real thing.  We had been drinking "Mock cocktails" up to this point, and I have to say I think I like the mock ones better!!

We went to the DaVinci restaurant for dinner, and Luke presented the waiter with a card saying that it was my birthday.  Our waiter was very attentive and made me a turtle and a samurai out of dinner napkins!  They also brought a beautiful chocolate cake with a candle and five waiters came to sing to me.  It was all very fun, and I love that my birthday celebration continues from July-  It's been quite a celebration.

Looking forward to our first adventure in the islands of Hawaii tomorrow.  Stay tuned...

Posted by nanwebware at 7:49 AM

So much fun to share in yours! I doubt any two people ever enjoyed a cruise more than you and Luke!

I am absolutely breathless reading your posts! So much to comment on.... I love hearing about all the people you are connecting with. You and Loren have a gift. Keep on writing, even though as we begin to prep for the arrival of Christopher's family and 'home made food' rather than a choice of restaurants I won't have the time to comment!

So glad you are having such a great adventure ~ but of course, Nancy, you make it thus. If I don't get to write in the next day or two, sending warm hugs and loving wishes for a great Thanksgiving. I am thankful for you, and for our friendship. 🙏💕

great blog and another happy birthday