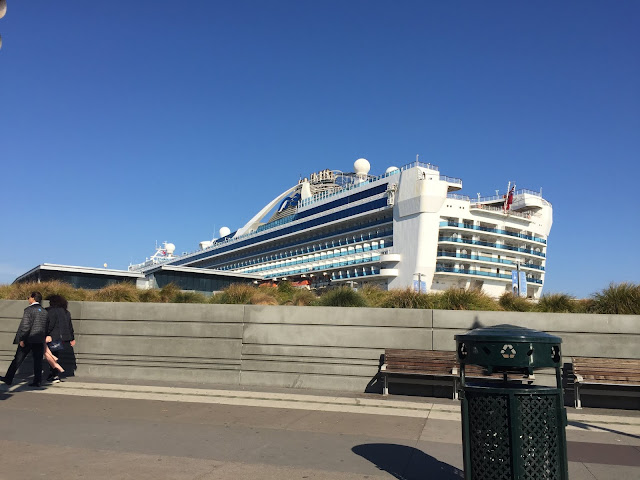 I really think a cruise ship should be added to one of the Wonders of the World!  This picture was taken front the road on our approach to board the ship.  It doesn't even begin to convey the size and glory of this mini-city on the seas.  She holds around 2500 passengers and we were told that the ration of passengers to crew is about 201, so that means there are about 3500 people on board.  We're out to sea for four days before we see land.  Just imagine the amount of water needed for showers, cooking, flushing etc. that has to be stored on board.  Not to mention the food, the waste, the garbage, the linens.  It's mind-boggling.  And yet they have the system down so that it seems like a beautifully choreographed dance.  Boarding was easy.  Our cabin is wonderful- compact yet everything fits.  The staff is remarkable- They must have trained them to smile and sparkle-everyone seems to scream out: "We are here to serve you.  Your pleasure is my pleasure.  Just ask and it is yours!"  Robert is our cabin person who was there almost the moment we arrived in our room to say he was there for us if we needed anything.  We unpacked and then decided to explore a bit.  It's a bit overwhelming at first, and I think I walked 5 miles just trying to figure out where things were.  We ended up on Deck 5 for a strawberry daiquiri while we listened to a young guitarist regale us.

I digress, but here's an interesting story.  All booze is extra- so we looked into buying the all-inclusive plan because we just didn't want to worry about it.  Well.... the plan was $77.99/day/person and we couldn't only buy it for one of us.  If we got it we had to get it for both of us.  Do the math:  That's $1169.85 x 2= $2339.70. JUST FOR LIQUOR!!!  That horrified us.  I think it came down to 5 drinks/day if we were to take full advantage of it.  So we decided instead to get the soda  package.  The only beverages free are orange juice, ice tea and lemonade.  The road package got you cokes, sprite, root beer, etc. PLUS any mock- cocktail you wanted.  So by the time I boarded to the time we had dinner I had sampled a strawberry daiquiri, a Pina colada and a mojito - all of which were delicious.  I am so glad that I didn't get the alcohol package because I never would have made it to dinner! 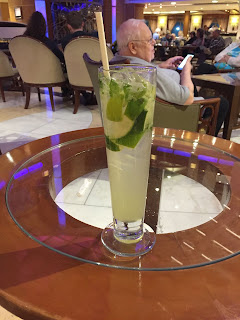 Around 3:00 we were all summoned to our Muster stations for a safety drill - very boring, but necessary.  I was reminded of the Titanic and could only imagine the bedlam of trying to get over 3000 people to safety on a sinking ship.

Then we returned to our room where we had a message waiting for us.  Days before we sailed, Vicky and Marshall, friends from San Francisco, had told us that friends of theirs were also sailing on the Princess, and we should try to get together with them.  The message was from Chet and Alice inviting us to one of the specialty restaurants for dinner saying, because they are veteran Princess travelers, they were given three 2-for-one coupons for dinner at the Crown Grill!!   We met them at 7:30 and were introduced to another couple, Sheri and Jon from Toronto, Canada.  Chet and Alice had met them at a bar earlier in the day.  Chet asked them what they were doing in the evening and Jon said they had reservations at the Crown Grill because it was Sheri's birthday.  Chet told them he had a 2-for-1 coupon and would they like to join them.  So here we were, six strangers, having dinner together at the posh Crown Grill, and it was a blast.  The conversation never ended, the food never stopped appearing, and it was a wonderful start to what I know is going to be a magical experience for us.  The most interesting conversation happened when Luke (aka Loren) turned to Jon and said, "I have a personal question for you, and you don't have to answer if you don't want to.  I'm wondering if all your tattoos have a story behind them?"

Well Jon's eyes lit up and he seemed so pleased to be asked that question.  He went on to tell us that he only had one small tattoo on his back before he met Sheri.  They have been married for four years but known each other for ten.  He has two sons and Sheri has a son and a daughter.  They have blended their families in a wonderful way.  Jon never believed in destiny or true love until he met Sheri.  So all of the tattoos he has are the story of his love affair with his wife.  There is the Archangel, Michael who is there to protect her.  There is a beautiful portrait of Sheri that almost looks like a painting, there are animals that represent their four children and each other.  He even took his shirt off to show us his back!  I asked him if he might get more and he said, "Definitely, my right leg is still white!" 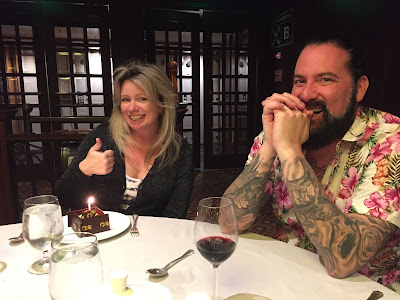 They were a wonderful couple, full of life, and they said this was the best dinner they've ever had on a cruise ship!  They also run a very successful professional development business in Toronto, own a Jaguar and a Hummer, and say money is not a problem for them.  We have always said it is the people inner lives that make us rich, and we struck the jack pot with these two.  I hope we run in to them again.

The only disappointing thing of the day was our departure.  We were scheduled to leave San Francisco at 4:00 pm, but the Captain got on the speaker and announced that there were some stragglers who had connection problems or flight delays and we were going to wait for them.  Later we were told that they were waiting for medical supplies.  I was so looking forward to being out on the deck as we went under the Golden Gate Bridge, but our dinner reservation was at 7:30 and we still hadn't left port.  During dinner, Jon looked out the window and said, I think we're moving!  I thought the Captain would announce that we were leaving, but we were already beyond the bridge and out in the Pacific Ocean and we hadn't even realized it,  The first time I walked on the ship while it was moving was when we got up from the dinner table and Whoa!!!  I wobbled and wove and found it very hard to get my footing.  Even this morning, when I went to get us some coffee, I swayed a bit.  I can't imagine if there were a storm with high winds and whitecaps.  We'd really be in trouble.

So as the sun rises on a new day, wish us smooth sailing. 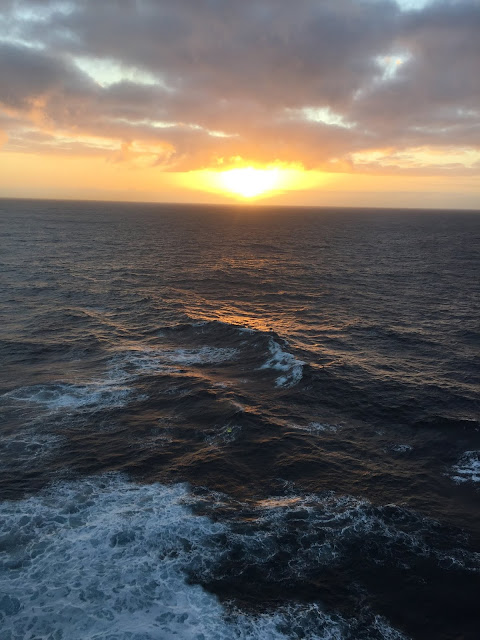 Posted by nanwebware at 7:49 AM