I got up around 5:00 this morning and went out on the balcony and say an island with some lights.  It turns out we were just going by Molokoi on our way to Maui.  When we arrived in Maui around 7:00 we saw a very brown arid hillside.  It runs out that each Hawaiian Island has a wet side and a dry side.  It was explained to us- something about the hot air brining the moisture up and then the winds blowing westward sends the rain over to one side. 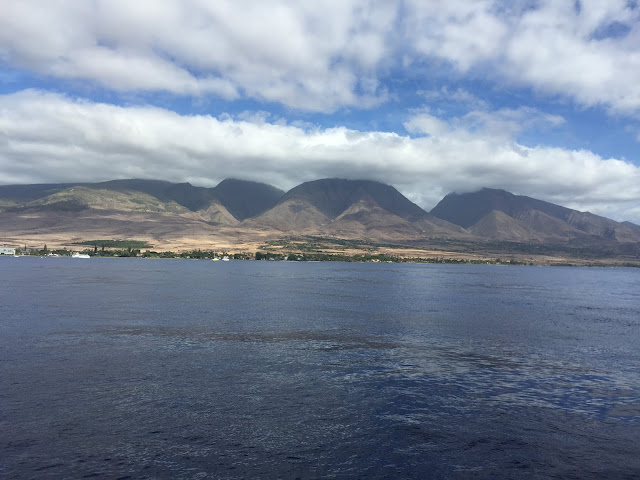 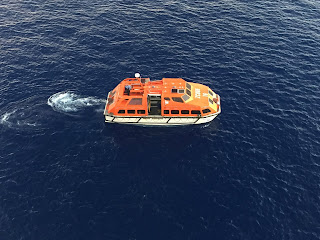 We anchored off the coast of Lahaina which doesn't have any piers, so we were shuttled to shore by launch boats.  It is quite a procedure.  We watched as the boats were lowered from the boat.  We were told to go to a certain deck to receive a number and when our number was called we were to proceed down to deck 4 either fore, middle or aft deck to catch out launch.  There was a notice we received which said, "Please note that with 3000 guests, water shuttles can only hold 50-100 persons at a time, so it will take about 4-5 hours to put the entire ship ashore.  We suggest gibing yourself plenty of lead time for any plans you may have.  The last water shuttle from shore is 5:00 pm.

We had planned to take an hop-on-hop-off bus around Kauai yesterday but got waylaid in the museum with Jim Jung, so we decided we would take one of these buses around the island of Maui today.  We got on this bus with two young guys who seemed a bit disorganized.  We paid $20.00 each and they told us they were going to four stops: The outlet, Black Rock, Whaler's Watch, and The Harbor.  The full tour took an hour but we could get on and off anywhere we wanted.  Sounded good so off we went.  Well the first stop was literally at an outlet mall so we stayed on the bus.  The second stop was at a Sheraton hotel where  they told us there was a beautiful beach and we could watch the divers jumping off of black rock.  We got out, walked through the lobby of the Sheraton, and went out back to see the beach.  It was quite magnificent with the Sheraton hotel looming over it.  The divers were jumping off black rock in the distance.   About 10 minutes later we had taken it all in, and the bus didn't come back for us for an hour, so we took a local shuttle to the next stop which was Whale's watch.  Well, that turned out to be another shopping center- with just rows and rows of stores.  So we discovered that another city bus could take us back to the Harbor and we ended up leisurely walking along Front Street where there were more shops, but at least it was quaint.  We had lunch at Bubba Gump's Shrimp Company.  Luke found himself another museum to prowl around in while I sat in a beautiful Banyan Tree grove and read my Hawaii book.  So we spent $40.00 to ride 1/2 mile on a bus that seemed to only go to shopping malls.  Oh well- maybe that means we'll just have to come back to Maui someday. 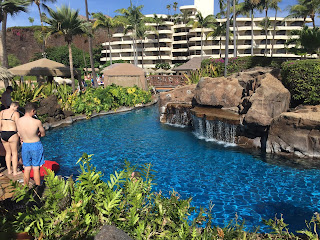 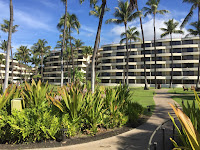 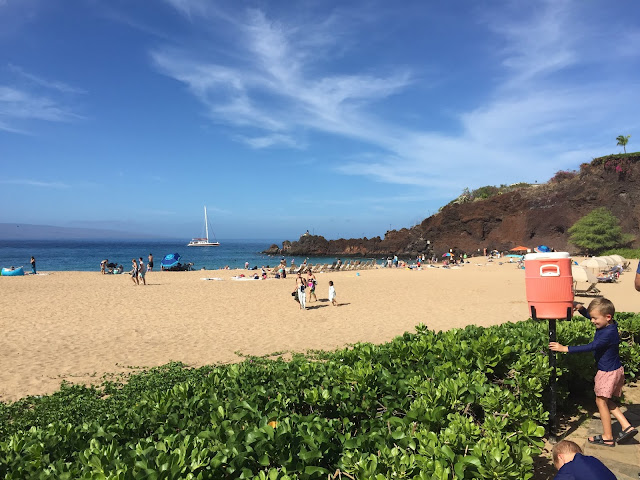 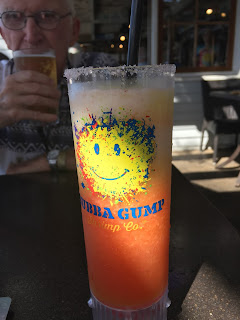 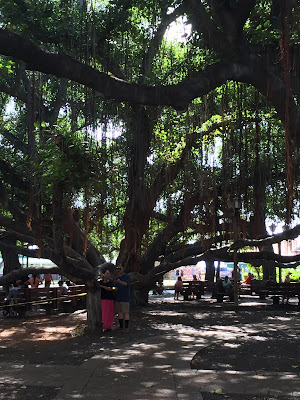 We took the launch back to the boat, got a refreshing mojito, and retired to our balcony to read. 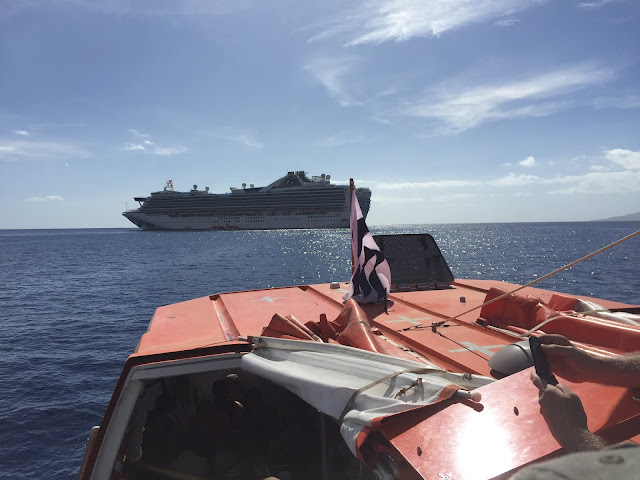 I am getting a bit of a feel for the Hawaiian experience.  I know we made some missteps along the way, and haven't really gotten a good feel for each island, but a large part of the culture here for tourists is sunbathing, eating, drinking and SHOPPING!!!  In Hilo and Honolulu, there were shuttles that took you to Walmart, and they were filled with people.  Walmart?  Why would you come to Hawaii and go to Walmart?  I asked some people and one said they had great, cheap Hawaiian material;  most people just said, "Cheap."  Then at each stop there were free shuttle services to the local malls.  It just seemed very weird to me to take a cruise ship to Hawaii and go shopping.  But by the number of bags brought on board the launch this afternoon, it is clear that the materialistic world is alive and well.

I must say that I am very happy our land excursions are over and I can just stay on board the ship and have a good time.  We leave this afternoon and will be at sea for four days before arriving at Ensenada, Mexico.  There is some regulation that a non-American ship (This one is from Hamilton, Bermuda) has to go to at least one international port in order to stop in the USA, thus Ensenada.  But Ensenada is a tourist trap so we aren't planning to get off the ship for that stop.

Not sure what we'll do tonight-  The entertainment is a comedian which doesn't really interest me.  Maybe well do a little dancing after dinner.  Aloha.

Posted by nanwebware at 7:22 PM