Another wonderful day.  The pace has changed a bit since we first started.  I'm not sure why, but there are fewer things on the "Daily Patter" that we must do, so our days seem a bit more leisurely.  Then again, we're staying up later and partying more at night. 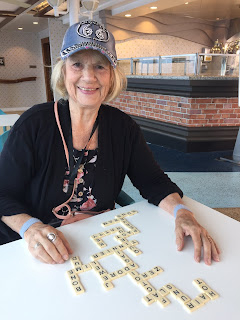 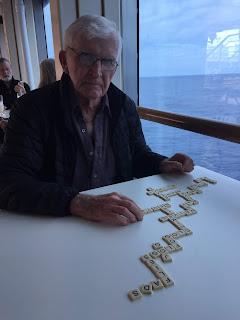 We had a late breakfast, then went to the pool deck to play a few rounds of Bananagrams.

Later, I went to my Pop chorus rehearsal.  We're doing so well with the songs that Jonny is adding some choreography to some of our songs which is quite fun.  We give our concert tomorrow!

Then Luke and I went to the Princess theater to hear a talk by the Captain, John Smith and his first Engineer.  It was interesting and we learned many things about the ship.  "She's not a boat," the Captain reminded us.  "A ship carries boats; a boat doesn't carry ships."

Do you know that they have desalination plants on board.  It would be impossible to carry enough water for 3,000 passengers for 4 days at sea, so they make their own water!  One time, they pulled in to a port that had been severely damaged by a storm and was without water, and the whole time they were at the port, they made water that was then carried off the ship by trucks and taken to the people on the island.

Another question posed to the chief engineer was about all the sewage and where did it go?  Well they have tanks filled with sewage-eating microbes that eat the sewage and excrete water.  They then filter this water and it is so pure you could drink it- but they don't, they put it back in to the ocean.

Someone asked about the gas mileage of this ship.  Well, she actually goes 55 feet/gallon!!!  BUT, the officer reminded us that she is carrying 3,000 people and 900 crew so when you calculate how many people she's transporting, it comes to 40 mpg!


After our meeting with the captain, we went to the Vista Lounge to the hula dance and ukulele program.  There have been Hulu dance and ukulele classes throughout the trip.  Luke went to two hula dance lessons, but didn't stay with it long enough to join in the concert.  But there was quite a crowd up on stage and they were quite good.  A good part of the ukulele had never played the instrument before and it was really fun seeing them up there performing. 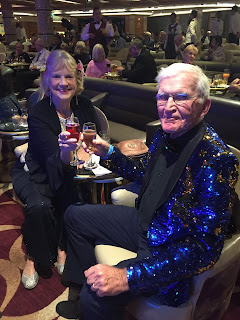 Tonight was another formal evening, so the sparkly jacket was donned and once again, Luke was the Beau  of the ball.  He had people asking if they could take his picture, and everywhere we went passengers and staff alike would ooh and ahh and make the thumbs up sign.  It was really fun.  Chet and Alice, who are Platinum Princess members, had an invitation to the Captain's Circle but they didn't want to go, so they offered it to us.  We went through a receiving line and even Captain John Smith was awed by Luke's jacket.  The elite passengers were recognized for their loyalty to Princess. There was a woman in a wheel chair that was celebrating her 102 birthday so we all sang Happy Birthday to her.  She was amazing.  The passengers with the most miles at sea were given a plaque and brought up in front.  They had clocked 786 miles.  It was interesting to hear that of the 3,000 passengers on board, over 1,000 of them were in the Captain's Circle.  We're not sure what constitutes an Elite or Platinum or Gold member, but that's a lot of people who have done a lot of cruising.  We have had a blast, but we're not sure we want to plan two or three cruises a year!!  We met a man yesterday who took this Hawaiian cruise because he wanted to check out this time-shares on Kauai and Maui that he and his wife will be staying at for 7 weeks...  and they're leaving for their time-shares in two weeks!  So you take a 15 day Hawaiian cruise to go and check out your time shares that you'll be staying in in two weeks?  Does that make sense? 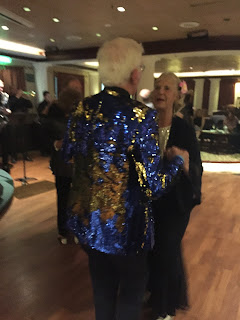 We went Dancing in the Wheelhouse Bar where the Princess orchestra played Big Band Era songs, then went to dinner. 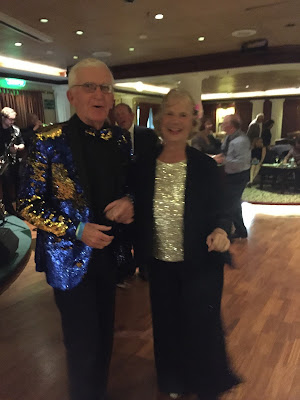 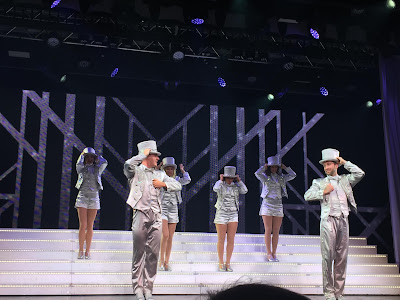 After dinner we went to the most amazing show called Born to Dance.  It was so much fun and such high quality, we could have been watching a Broadway presentation.  The singers and dancers were terrific, the music was wonderful as they traced the history of dance and the different choreographers over the years, and the costumes were fantastic.  I was in heaven.

Then we went down to the Piazza where we closed out the disco dance band.  What is so amazing to me is to see so many older people kicking up their heels.  If you were to pass them on the street you would think their lives were pretty dull and boring.  But to see them on the dance floor is a whole other experience.

Tomorrow we arrive at the Port of Ensenada.  It turns out we are only there for three hours- from 4:30 pm to 7:30 pm.  We're not planning on getting off the ship because we don't want to buy anything, and Ensenada is kind of a nothing place.  Hopefully it will warm up and maybe we can go for a swim in the pool!

Posted by nanwebware at 7:58 AM