We are such stuff as dreams are made on...

Today a dream I didn't know I had came true...

But I get ahead of myself.  Today we split up again.  Loren went off in search of a discounted ticket to Noel Coward's Private Lives and then on the the Tate Modern.  Don already had a ticket to go see Les Miserable, but he came along with me in the morning.   I went to the Globe theater so I could get a ticket to MidSummer Night's Dream and then the two of us would walk on the Burroughs Market. 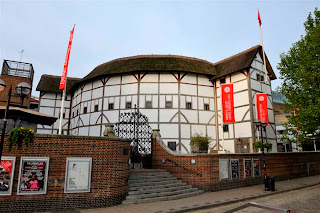 Well it turned out we had mis-read the schedule and Midsummer Nights wasn't playing.  It was the Tempest and it was all sold out!!  The guy said if I wanted to stand in line about 1 1/2 hours ahead of the show, I might possibly get a ticket that has been turned in.

I was quite disappointed as I had taught Midsummer Nights for seven years; I really liked the play and was familiar with it and was looking forward to seeing what a real Shakespearean company would do with it. 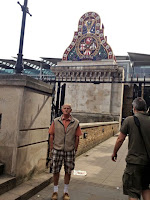 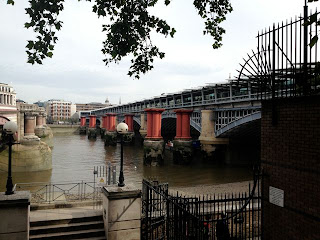 But Don and I had a lovely walk along the river. There was a Shakespeare quote etched onto a grille that said, "Men's evil manners live in brass; their virtues we write in water." (from Henry VIII)   We contemplated what that meant. 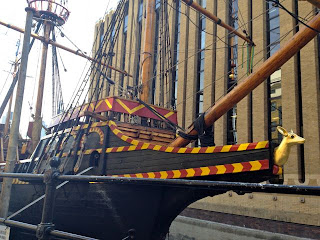 Then we walked by The Golden Hind which is a replica of the ship that Sir Francis Drake sailed around the globe. 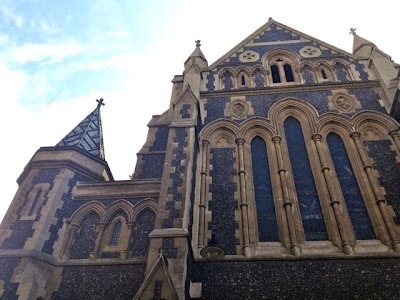 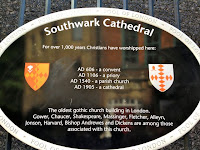 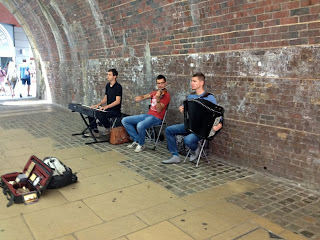 We passed the Southwark Cathedral which claims to be oldest Gothic church building in England and dates back to 606 AD when it was first a convent.

We walked through a tunnel to find three young men playing Pachelbels' Canon.  It was a beautiful sound.


Then we found ourselves at Borough Market which was a smorgasbord of food displays.  There were many food stalls selling all sorts of things from hog to paella.  And there was also the wholesale market with vegetables of all kinds, fish, meat, pastries and fruits. 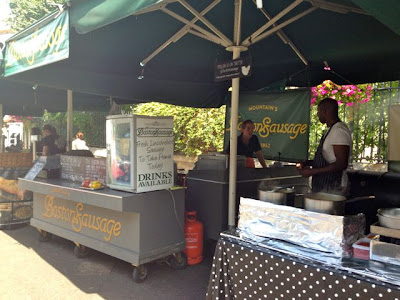 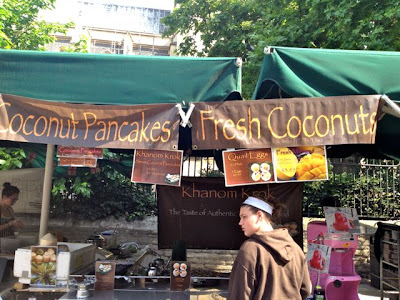 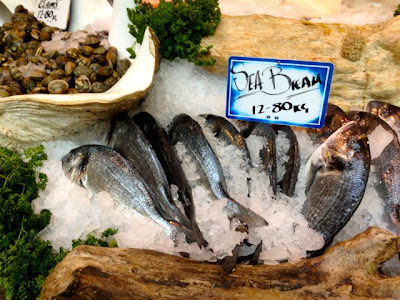 The fresh market food rivaled the showcase we found in Harrods. 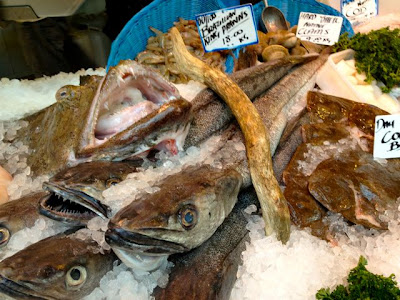 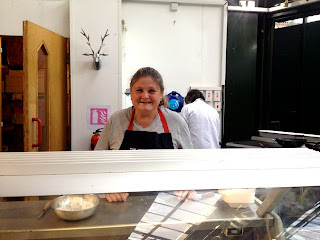 As we were walking along Don said, "Nancy, come here.  I want to show you something."  He brought me back to a fish seller and pointed to a bucket of something and asked if I knew what they were.  I had never seen anything like it.  They were called Winkles and are something akin to Cockles (which I only knew about from the song about Molly Malone singing "cockles and muscles alive alive-o."  Don told me how, when he lived in Exeter, he used to go to the Devon shore and buy Winkles.  They would come in a brown paper bag and were served with a pin.  He would spike one with a pin and eat it.  It turned out that the lady behind the counter also lived in Devon, and she would go visit her grandparents in a sea side town not far from where Don went;  she too, would buy Winkles and eat them from a brown bag! I knew we had to get some to take home. 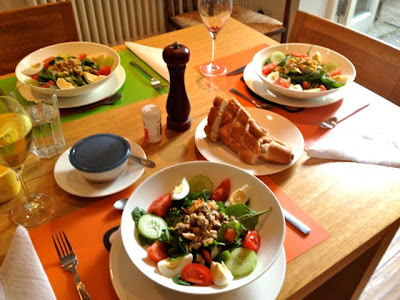 I was thinking more of a small amount that we might have as an appetizer, but Don kept saying to this lovely lady, put another scoop in!  Then Don suggested that we have them for dinner in a salad.  It was my turn to cook dinner and that's exactly what I did- and it was a gourmet, delicious meal!! 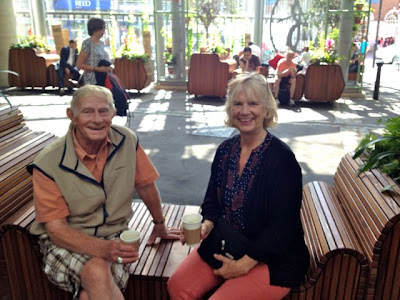 Don and I were getting hungry, so we stopped by to get out English pies which we ate in a little seating area in the market.  Then it was time for me to get back to the Globe and for Don to head for his Les Miserables. 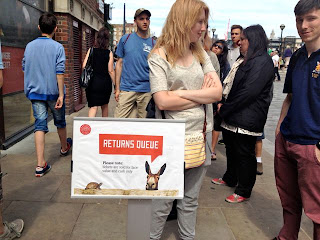 I got in the line at the Globe around 12:15, and I was #9 in line. We were waiting for people to come and turn their tickets in or call to cancel their tickets.  It wasn't until about 1:30 that a guy came out with some tickets.  I was now #5.  Then he came out with Groundling tickets only.  They were only 5 Pounds ($7.50) but they were standing only.  Oh, I didn't want to stand.  Remember, I had been standing in line since 12:15 and my legs were really tired.  But a young girl behind me had seen The Tempest just last night and she was standing in line because she wanted to see it again.  It was her first time seeing a production in the Globe and it was so good she wanted to see it again!  So I bought the Groundling ticket for 5 pounds.  I was heading up the stairs towards the theater and thought, How long is this play?  Can I really stand for much longer?  So I turned around and went back to the line.  The play was 3 hours!!  There was no way I was going to be able to stand for three more hours!  So I sold my Groundling ticket to the next person in line and waited.... more Groundling tickets became available... It was now 1:50 and the show started at 2:00!!  Then a lady said, "I have a ticket."
"Is it a Groundling?" I asked.
"No.  It's an obstructed view for 18 pounds."
"I'LL TAKE IT!"
Well it turned out to be the first balcony.  There was a post to my right, but the seat next to me was vacant, so I just moved over and saw perfectly.

And here is where the dream that I never knew I had came true.  I cannot tell you what an exciting experience it was to be in the Globe theater in London watching a Shakespearean play.  The audience is so close to the actors.  The Groundlings number more than those with seats, and the actors would spit and spill whiskey and water on them.  One young woman fainted and had to be taken out in a wheel chair. 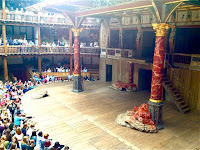 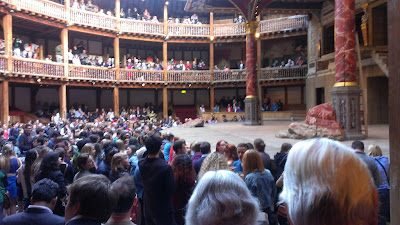 The acting was beyond magnificent.  Prospero and Ariel were fabulous, but my most favorite character was Caliban.  He was so surreal and his movements and voice made him seem inhuman at times.
I had no idea what an amazing experience that was going to be.  If you haven't had a chance to see a Shakespearean Play in the Globe Theater in London, England, PUT IT ON YOUR BUCKET LIST! 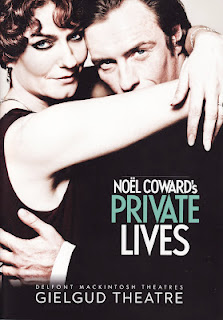 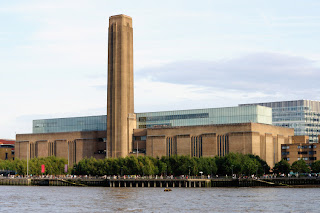 Loren went to the Tate Modern in the morning and said it was just okay.  Then he went to see Noel Coward's Private Lives.  The audience was laughing a lot and he couldn't figure out whether he just wasn't hearing it all very well or perhaps there was a lot of English humor that he wasn't getting.  We think there was a movie made of it which we might rent when we get home. 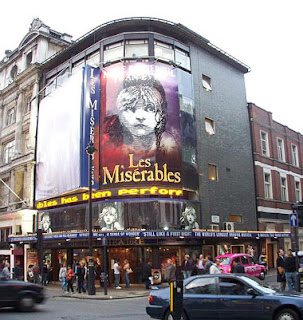 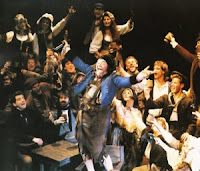 Don came home, eyes still wet, full of emotion and awe for what he said was the best Les Miserables he had ever seen or heard.  The voices, the acting, the sets, the costumes - unbelievable.  The audience went crazy and gave them a number of standing ovations.

Another great day in London!

Posted by nanwebware at 2:44 PM

Nancy, your words, your photos and your feelings are beyond my words of praise for this travelogue. if you want cash for your next adventure, publish girl, publish. Rick Steves, beware!
Keep enjoying. Hugs to you and the guys, SHB

I cannot believe what you guys are experiencing, its beginning to make me view London in a different light!! (ok I knew all about the beer and fish & chips) I look forward to showing you some English country villages this weekend so you can contrast and compare.

I agree with SHB.

SO happy to hear about Globe experience.