Seeing a Bit of the Countryside

We're all slowing down a bit, and as Don announced, "I'm Londoned Out!"  We were looking forward to going out to the country to visit Don's nephew Richard and his wife Julie in the afternoon, but when we asked the question, "So what shall we do in the morning?" There was a resounding, "NOTHING!" 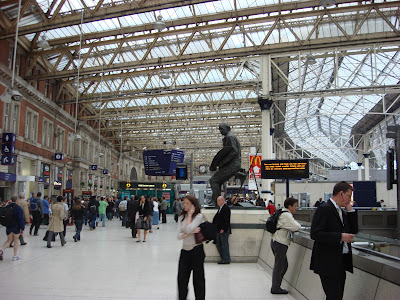 In the early afternoon, we headed out for the Waterloo Station to catch the train to Woking which is in Surrey, about 30 miles southwest of London. We took the Tube from Hammersmith to the Waterloo stop, rode a couple of escalators up and found ourselves in this huge bustling railroad station - the busiest train station in London.

Once again I am awed by the transportation system in this country.  Here's a statistic that I think you Americans will find mind-boggling:  there are 366 heavy rail stations in and around London!!  ... not England.... London!!  The population of London is about 8 million - roughly the size of New York City.  I was told that each day an additional 7 million make their way in to the city to work!!  Then of course those same 7 million need to wend their way back home at the end of the day!  And that number doesn't include the masses of tourists like us that are using the transportation system.  And it works beautifully and so efficiently!

We sat down on the train and almost immediately Loren found himself in conversation with a man across the aisle. 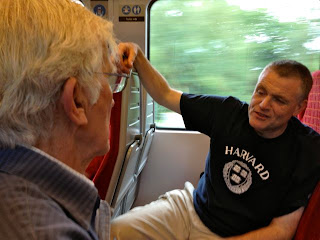 "Did you go to Harvard?" he queried pointing to the man's shirt.  I turns out he had studied there for a month taking some course in the business school.  He is a civil engineer with a wife and five children who live in Kerry, Ireland.  He was on his way to Surrey to finish some course work, and is writing his thesis on the concept of a dashboard for building contractors to be able to assess the efficiency of a building project without having to pour through a lot of paperwork. Don and Loren and this guy chatted each other up for the entire train ride!  Very funny.


Richard and his wife live in Chobham, a small town in the county of Surrey.  When I looked up Chobham to find out a bit about the history, I discovered something interesting: 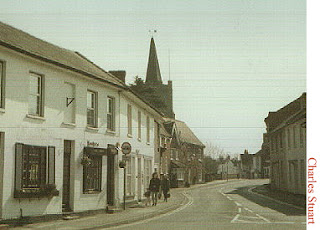 "Chobham has been  bypassed by every new trend.  The Romans hurried on past to fight their battles in the North and West.  The turnpike road developments of the 17th and 18th centuries brought prosperity to Bagshot  and Ripley, but they missed Chobham.  The canal developments went too far to the south.  The railways brought massive growth to Woking and Sunningdale, but the planned railway line to Chobham was never built."

So the town has been able to retain its charm.


Richard met us at the Woking train station and drove us around the countryside.  Although on 30 miles away, immediately you knew you were out of London.  The green fields, the winding roads, and the lack of buses gave it all a very different feel.  Richard, having read this blog, knew immediately that the first stop had to be a country pub for a pint.

He chose to take us to a beautiful quaint village of Shere.  Some of the houses were as if they had been frozen in time.


Because it is so authentic and picturesque, it has been the site of several movies: 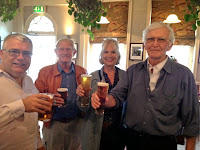 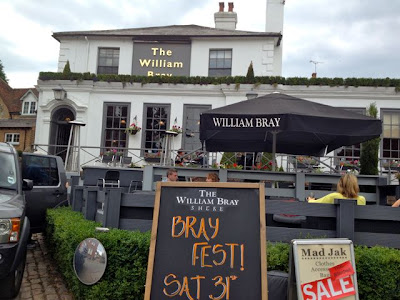 The pub we went to for out pint was called The William Bray.  It was a beautiful day and a great way to start our visit in the countryside. 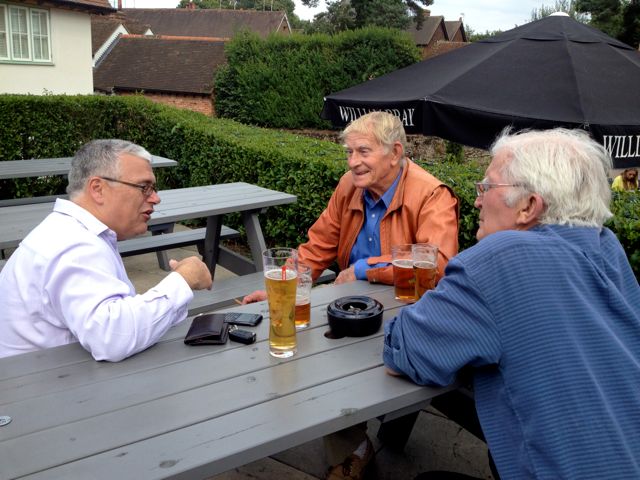 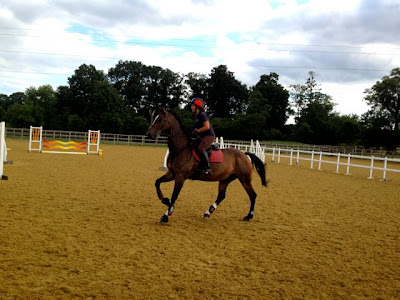 After our refreshment, Richard drove us to the stables where his daughter, Chloe, was jumping her beautiful horse Rollie.  Chloe has been riding horses since she was 7, and it was a beautiful site to see her with her horse.  We watched her in the ring taking Rollie effortlessly over various jumps.  Then she brought him in to the stables, washed him down, cleaned him up and gave him his dinner.  Chloe is 18 and is waiting to hear where she will be going to University.  Her younger sister, Caris was on holiday so we didn't get a chance to meet her.  (Good Luck Chloe- Let us know what you'll be doing next year.) 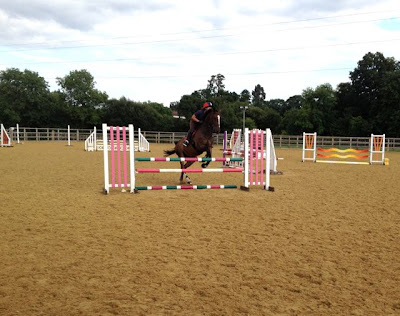 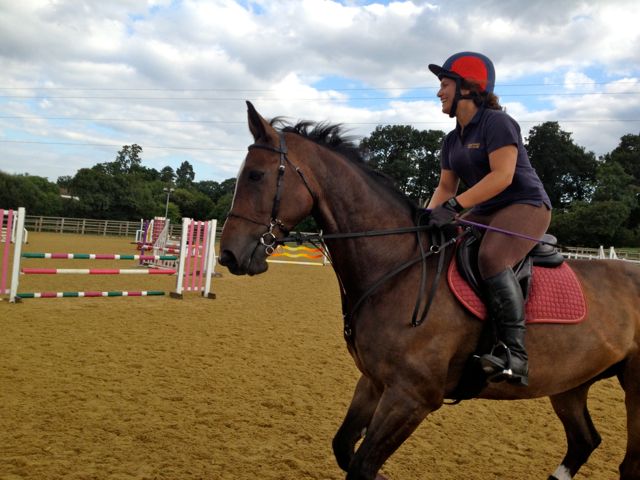 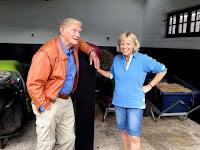 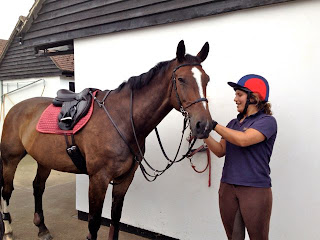 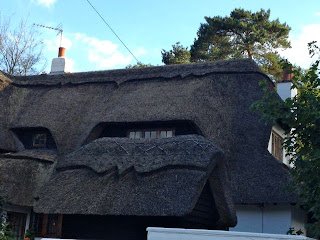 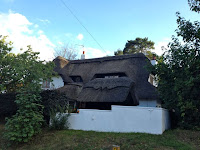 On the way to Richard and Julie's house, we passed by a beautiful thatched roof house.  These roofs are becoming rarer and rarer mostly due to the high cost of insurance as they are a tremendous fire hazard, but also because they are very difficult to maintain and the thatching trade is becoming obsolete. 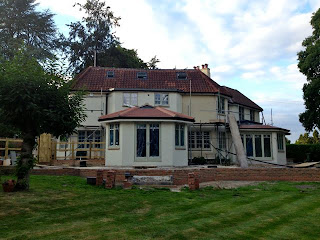 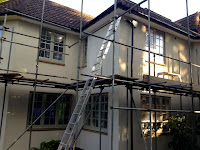 Richard and Julie had moved to Chobham about four years ago, and we had heard about their re-modeling project from Don, so we were looking forward to seeing the house which has been under renovation for more than 9 months with at least another month to go.  It was incredible!  I wish I had seen the house a year ago as it was very obvious that the renovations made were quite extensive.  Julie has taken on the role of the "Forelady" of the project, in which she should take great pride.

While in the kitchen I noticed a rendering of the house which shows it without the scaffolding. 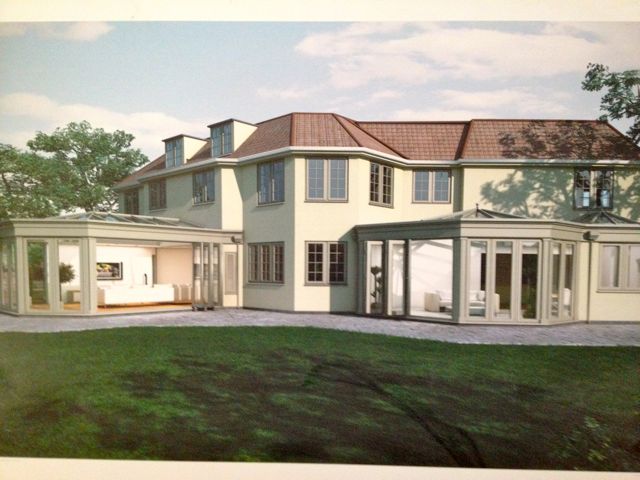 We shared a glass of wine, sitting around a table on the vast green lawn before going to the Brickmaker for dinner. 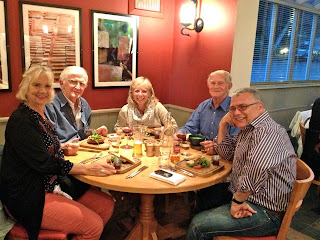 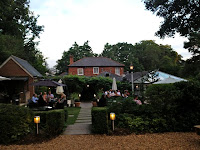 I'm not sure if the word "Pub" has a different connotation in the country than in London.  I was told that we were going out for a pub dinner.  Well the Brickmaker was not like the dark, beer smelling pubs we had frequented in the city.  It was a beautiful, airy restaurant with items like chicken liver pate, fresh sea bass and crab with crusty bread on the menu.  We had a delicious dinner and the conversation never stopped.

The generosity of Richard and Julie continued as they offered to drive us back in to Hammersmith.  We had had a perfect day in the country, and I told our hosts that we had to plan a return trip just to see the finished house!