The three of us all had different agendas today.  Don left first, going off the the Science Museum followed by the Museum of Natural History.  Loren headed out to the Wallace House which had be recommended by our friends, Val and Larry.  I had one goal in mind:  to find a souvenir of baby Prince George!! 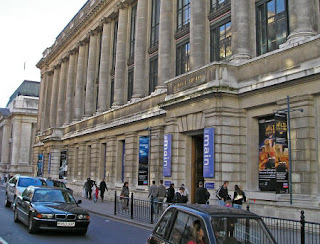 Don returned rhapsodic.  He was so impressed with the science museum and the comprehensive exhibits it had. He first went to the exhibit called the Age of Steam.  In Britain, coal and steam came hand-in-hand. By 1700 miners needed a new, more powerful way of draining mines as they got deeper. 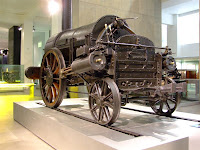 Stephenson invented the Rocket- a steam locomotive engine while James Watt worked on a steam engine for industrial use.  The steam engine made it possible to have towns built away from rivers as you no longer needed running water to make things work.  It was with the invention of the Watt steam engine that began the first industrial revolution at the end of the 18th century.  One steam engine for example drove 900 looms - an amazing breakthrough.  The steam engine also allowed for water to be siphoned out of the mines and so coal and copper could be mined more efficiently and at mush deeper levels. 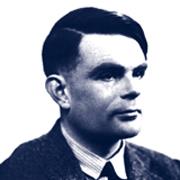 Don next went to an exhibit about Alan Turing and the breaking of the Enigma Code during WWII.  He said, "It is absolutely the best exhibit I have ever been to in any museum.  It's incredible."  He spent over 1 1/2 hours in just this exhibit and could have stayed longer.  Alan Turing was a mathematical genius

Turing's most important contribution, I think, was of part of the design of the bombe, the cryptanalytic machine. He had the idea that you could use, in effect, a theorem in logic which sounds to the untrained ear rather absurd; namely that from a contradiction, you can deduce everything.

Turing invented what were known as bombes - 90 in all.  These machines would click away like knitting needles detecting when a contradiction had occurred, and ruled out that setting, moving on to the next. Most of the possible settings would cause contradictions and be discarded, leaving only a few to be investigated in detail. The first bombe was installed on 18 March 1940.  Turing's contribution to the Allied victory in WWII cannot be underestimated.  Sadly he committed suicide when he was 40 years old.  He had been convicted of being a homosexual - an offence in Britain at the time.  He was told he could go to prison or take female hormones.  He took the hormones for two years before taking his own life by cyanide poisoning. 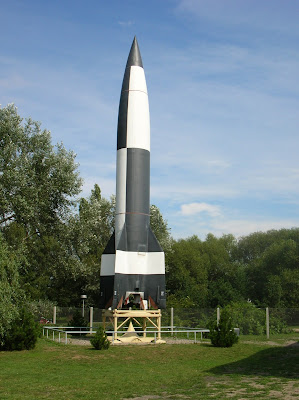 Finally, Don reported seeing the German V-2 developed by Werner Von Braun.  It was an enormous  rocket used in the bombings of London. This liquid-propellant rocket was the world's first long-range combat-ballistic missile.   These rockets had NO guidance system in them, so the Germans had to experiment with the accuracy. The British, not wanting to give the Germans information about the targets of the rocket did not allow the press to disclose the location of the bombings.  However, cleverly, the Germans studied the obituaries from the London papers, and by knowing who was killed, they could determine where their bombs had dropped!

Next Don left the Science Museum and entered the nearby Museum of Natural History.  Here he went to the Green Zone exhibit where he learned about the development of man on Earth.  There was a 12 hour clock representing the history of our planet; the human race appeared at 2 seconds before midnight!!

He also was fascinated by an exquisite exhibition of gem stones.  He was especially drawn to a collection of Tourmaline as Eryl's engagement ring contained a beautiful green Tourmaline.  There was a display of the Cullinan Diamond.  The Cullinan diamond is the largest gem-quality diamond ever found, at 3106.75 carat;  it was found in 1905 near Pretoria, South Africa.

The diamond was given to Edward II and was cut in to 7 major stones and 96 minor stones.  The two largest reside in the Crown Jewels of the United Kingdom.

Finally,  Don saw an exhibit called The 3 Windows.  One window showed "everyday" objects from 1725-1820.  The second show objects from 1820-1890;  the third from 1890-1970.  In the first window, for example, there was a penny farthing bicycle machine.  From the second window he saw a surgeon's kit with a highly polished silver saw and scalpels placed in a felt-lined box;  in the third window he saw a transistor radio, electric light bulbs, and an Apple II computer.

Just a note:  both the Science Museum and the Natural History Museum are FREE to the public!! 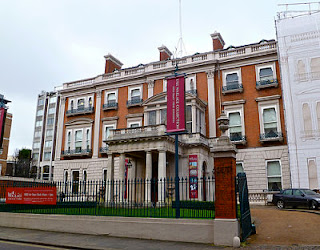 Loren's morning took him to the Wallace House.  The Wallace Collection is a museum in London, with a world-famous range of fine and decorative arts from the 15th to the 19th centuries with large holdings of French 18th-century paintings, furniture, arms & armor, porcelain and Old Master paintings arranged into 25 galleries.

It was established in 1897 from the private collection mainly created by Richard Seymour-Conway, 4th Marquess of Hertford (1800–1870), who left it and the house to his illegitimate son Sir Richard Wallace (1818–1890), whose widow bequeathed the entire collection to the nation. The museum opened to the public in 1900 in Hertford House, Manchester Square, and remains there, housed in its entirety, to this day. A condition of the bequest was that no object ever leave the collection, even for loan exhibitions. This "museum" also is FREE! 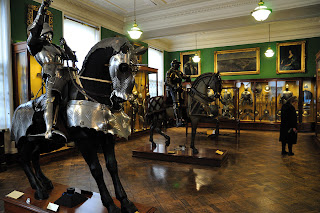 Loren said the collection was mind boggling.  How one family could have acquired such a vast array of exceptional art is amazing.  There are paintings, armor, sculptures, furniture, ceramics and much more.  There are over 25 galleries in the home, all chocked full of precious art. 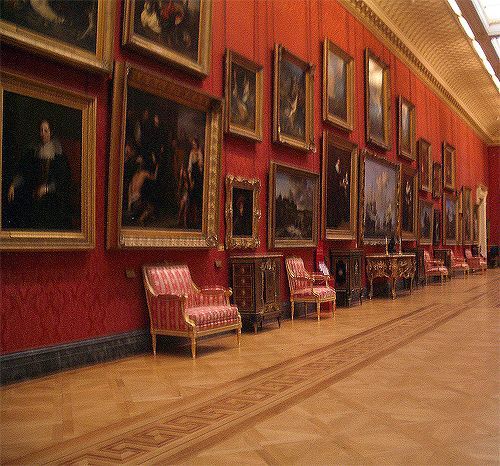 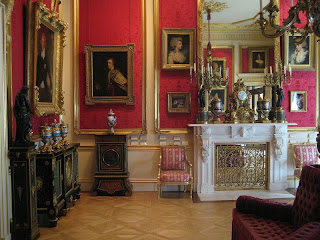 My morning took me to Picadilly Circus - a very touristy part of London that reminded me a bit of a boring Fisherman's Wharf. What is it about tourists world-wide who like expensive junky souvenirs and fast food places?  I went to several places with the sole purpose of finding (an expensive junky souvenir) of baby Prince George.  The ONLY things available were a cheap magnet and and expensive mug;  I got the cheap magnet!!  Then I walked around just feeling a part of the city.  I went by Trafalgar Square and took a great picture of the Blue Rooster looking at Lord Nelson.  You can't really see the blue, but the angle and the white clouds and blue sky just struck me. 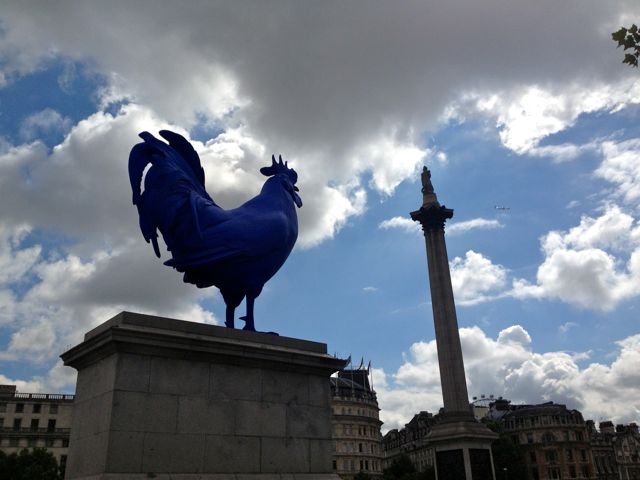 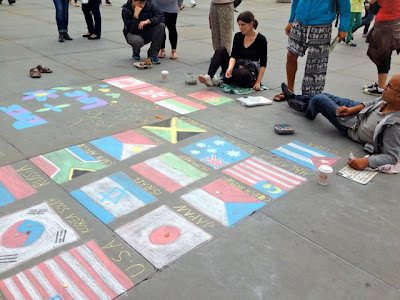 Further along were some young people drawing a variety of flags in chalk on the sidewalk.  It was a very clever idea as people would put coins on the flag of their country.  There was only one coin on the USA, so I dropped two more.  The country with the most coins at this particular point was China. 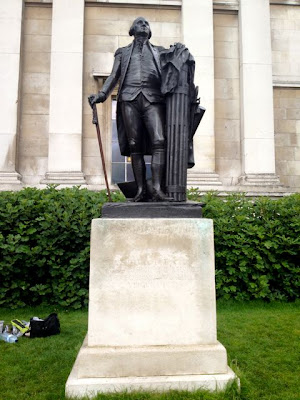 Then I passed by a statue of George Washington.  I did a double-take!  George Washington?  What was he doing here in London?  I took out my camera and took his picture before I took out my glasses and read the worn inscription:  something about honor the Irish- I couldn't read the name of who the guy was, but he was a ringer for George! 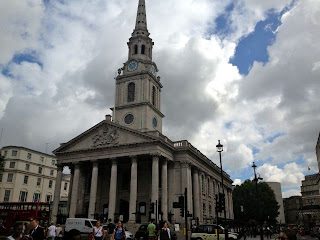 By this time I needed to go and find Loren who was meeting me on the steps of St. Martins in the Field.  We were going to their lunchtime free concert.  St Martins is just off of Trafalgar Square and is a beautiful old church.  It is the local parish church of the Royal Family and is one of the most well-known churches of London.  When I entered the church I was struck by the huge glass window at the back of the altar.  I spent most of the concert looking at that window;  I found it hauntingly beautiful, but I knew it was relatively recent, so I looked up the story behind it.

There was a competition offered to  "provide a permanent replacement for a stained glass window shattered by bombs in the second world war that would "successfully animate the light."  The abstract cross-infused design by the 1994 Turner prize nominee Shirazeh Houshiary and her architect husband Pip Horne was chosen.  Shirazeh is a Shiraz-born woman who has resided  in the UK since 1974.  The new window was installed in 2008. 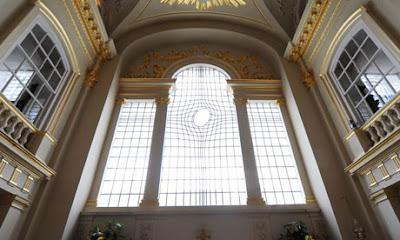 Rev Nicholas Holtam and his commissioning team chose Houshiary's design.  "The fact that we are standing now in front of a church window designed by an Iranian woman artist, at the beginning of the 21st century, is truly significant," Holtam said.

The concert, by the Krakow Duo, was wonderful.  Two friends since childhood, these young musicians played their piano and cello almost as if they were one instrument.  The Chopin was especially moving. 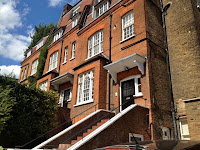 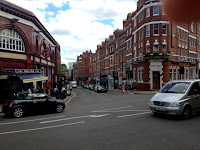 When Bob Yeager, a great friend of Loren's heard we were going to London he asked his daughter, Rachel, who had lived there to give us some tips.  Rachel had lived in Hampstead, a section of London in the North - around 11:00 on the dial.  She mentioned a wonderful pub in her neighborhood, and since the afternoon was young and we had yet to have our daily pint, and we were next to the Charing Cross Tube stop that took us directly to Hampstead, we decided to check it out.  Hampstead is a very charming neighborhood with narrow streets and old brick buildings. 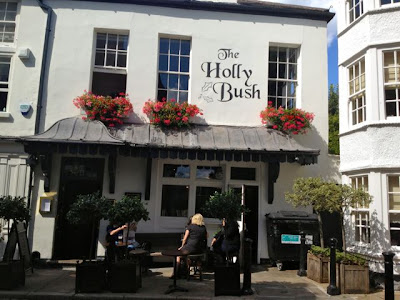 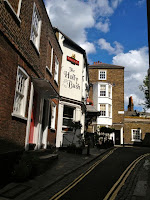 We walked up a hill and found Rachel's local pub, The Holly Bush.  I was quite delightful, tucked away and had a charm not found in the downtown London pubs. And, much to our surprise, we discovered it was a Fuller Pub- so I could have my Honey Dew! 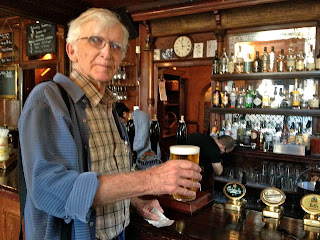 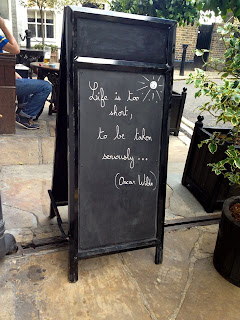 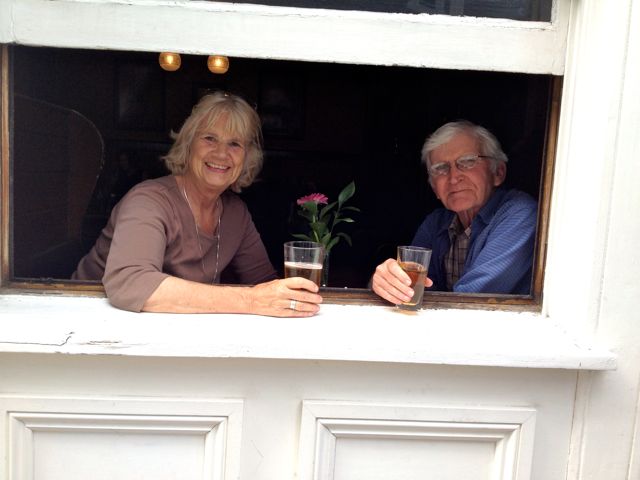 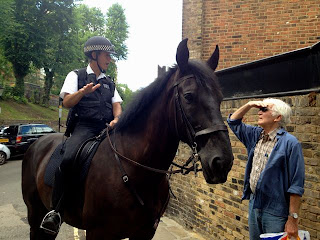 As we were leaving the pub, we met a mounted policeman who was most friendly.  He told us that there were 129 mounted police in the city of London and they have been very successful in spreading positive PR around.  They draw attention and people talk to them, and they are planning to increase the force.  When I asked him if I robbed a bank and ran off would he be able to catch me, he replied, "Well it all depends on how much money you're carrying now doesn't it?"  His horse's name was Sir Llewellyn.
Another "brilliant" day in Londontown.

That photo of you and Loren is fabulous! I continue to enjoy every minute vicariously.