Here's Looking At You

I dedicate this blog to our friend, Larry Gibbs who is passionate about his beers.  He and his wife, Val, have traveled the world and make it a point to visit brew pubs along the way and some out of the way.  I think they may be approaching the 5 mark of brew pubs visited.   After today, I have a renewed appreciation for beer. 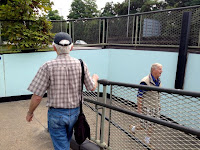 We took the bus to Chiswick (pronounced with a silent "w"), and they have what are called "subways" for pedestrians to get from one side of a heavy highway to the other by going through an underground tunnel. 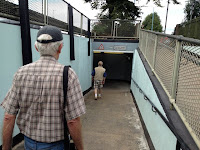 Our tour met in the Mawson Arms, a lovely pub/restaurant that was once the home of Alexander Pope. 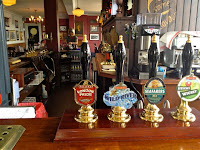 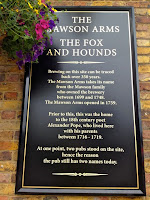 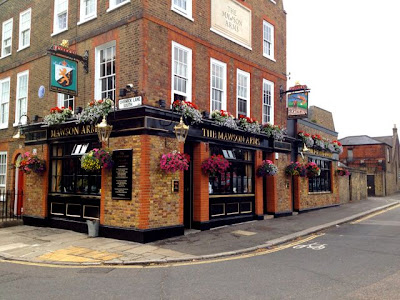 There were nine people on our tour led by a very knowledgeable guide who had been working for the brewery for over 20 years. 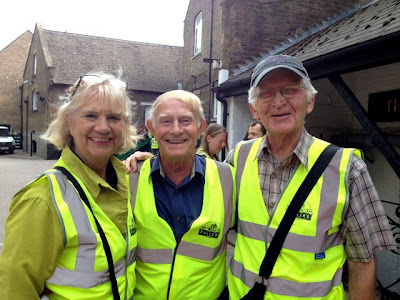 The first thing we did was don some protective jackets to make sure we were visible.

Our guide took us through the entire brewery, going up stairs and down stairs and around vats and into cold cellars where the hops are kept.  It was quite interesting and a bit awesome to see what goes in to the process of making a pint of beer! 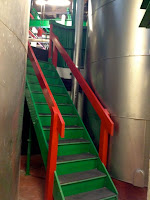 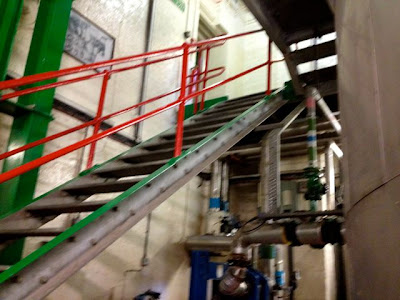 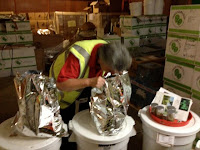 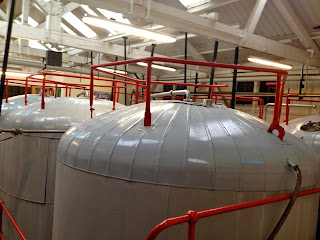 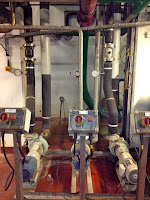 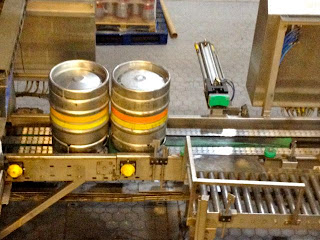 The actually bottling and kegging was fascinating but they asked that we didn't take pictures in this area.  There was a huge robotic arm that lifted the metal kegs up and swirled them around. 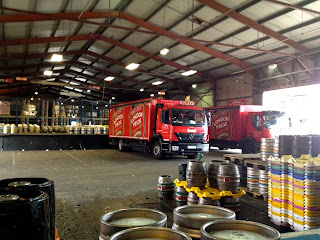 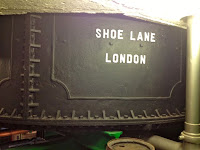 Then we saw them loaded on to the distribution trucks for delivery to the pubs.

The brewery underwent a total update and remodel fairly recently, but there were also remnants from the early brewery days. 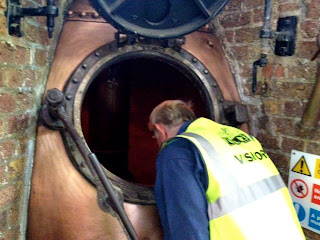 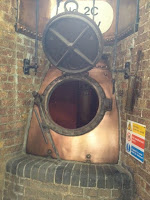 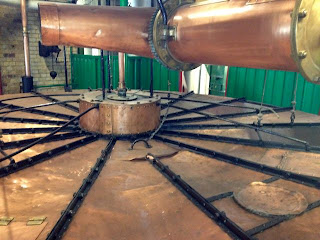 This is an old copper oven where they roasted the hops.  It was heated originally by coal.  After every batch, the inside of the oven had to be washed by hand.  Two workers donned special clothing and gloves as it was quite hot.  They used lemon juice and vinegar and scrubbed the goo that had oxidized onto the sides.  It took two men two hours to clean it.  They never assigned this wearisome task; they always asked for volunteers and never had to worry because they offered these workers double rations of beer if they performed this work. 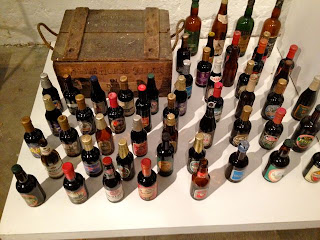 After the tour ended we went to the tasting room where there was a kind of museum with old bottles and labels and machinery.  There, too, we were permitted to taste and drink as much beer as we wanted!!

She started us out with a bitter that was 3% alcohol and four beers later we were tasting a beer that was 8.5% alcohol.  She called the first beer a "session" beer because it was light and you could sit around for many sessions drinking it without a problem.  Later she gave us a taste of a vintage beer that almost tasted a bit like a brandy.  She suggested that it would be a lovely "after-dinner beer." 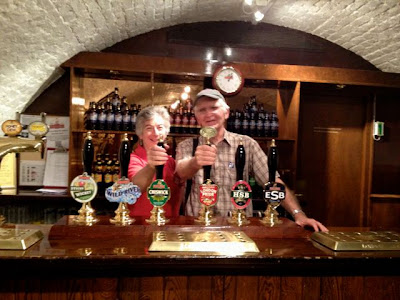 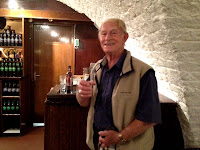 One young couple on the tour was asking some very technical questions, so I asked them how they knew so much about beer making.  They were from Austin and were just starting their own brewery.

We all had a fun and interesting time on our tour which ended around 1:00.  Feeling a bit peckish, we decided to pop into the Mawson Arms for a bite to eat. 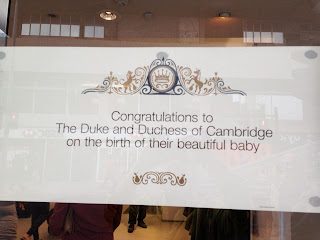 Taking the bus home, we had to pick up a few groceries on the way.  We went in to Marks and Spencer and I was so excited to see this sign on their door congratulating Kate and Will on the birth of their baby.  I really am so disappointed with the Brits.  There was front page news the day George was born, but little afterwards.  I thought for sure the stores would be selling all sorts of souvenirs or mementos but I can't find any thing about baby George anywhere!  Even this Marks and Spencer sign is quite generic- as though they had it printed up well before George was born.  I'm not going to give up... I'll keep looking.


So sorry- I forgot to get a picture of us with our pints - but rest assured that we had our tastings for the day.

Fascinating news about the pubs and beer! I, too, love the signs and was interested to learn that the names come from the pictures. Glad you are having such a rolicking good time!!!
Carol

Enjoyed your Pub blog..you and Loren should open an authentic one in SF..you would have so much business.
Also thanks for postcard..from so far away.


keep writing and having fun,
Emmy

OMG! I'm psyched and honored. I don't think I've ever had anything dedicated to me before. But, then again, it is about beer. Always nice to see new converts. Keep chugging, and have a pint or two for me. If we were in Australia we could go out and "smash a few tininies" together, but that's another time. We'll have to be content to wassail in different cities for the nonce. Keep on keeping on with the good times.

PS: Saw you stopped for ice cream the other day - have you found clotted cream ice cream yet?