Do you know where you are? 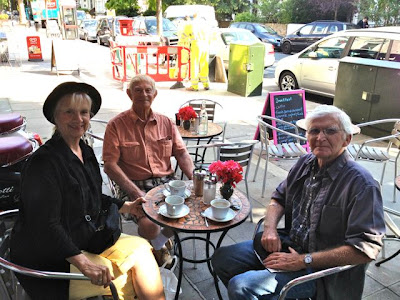 Today we had a single purpose in mind;  all three of us were of a mind to go back to Greenwich to go to the observatory.  Since we only had one thing on our to-do list, we started out a bit more leisurely.  We stopped off at a local cafe that Loren had discovered on his gym route.  We sat outside on yet another glorious London day and had a cup of coffee.  Our waiter was speaking in an unfamiliar accent and when I asked him where he was from he said Minas Gerais, Brazil!  He was delightful, and we had a lovely conversation with him. 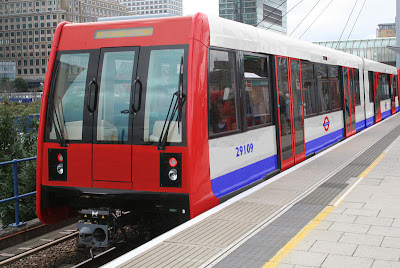 Then we got on the Tube for a very long train ride.  Hammersmith is in the far western part of London while Greenwich is far to the East.  Don's nephew, Richard, provided me with a very good way of figuring out where things are.  Picture Central London as the center of a clock.  Hammersmith might be at 8:00 in the southwest corner while Greenwich would be 5:00 in the southeast corner. 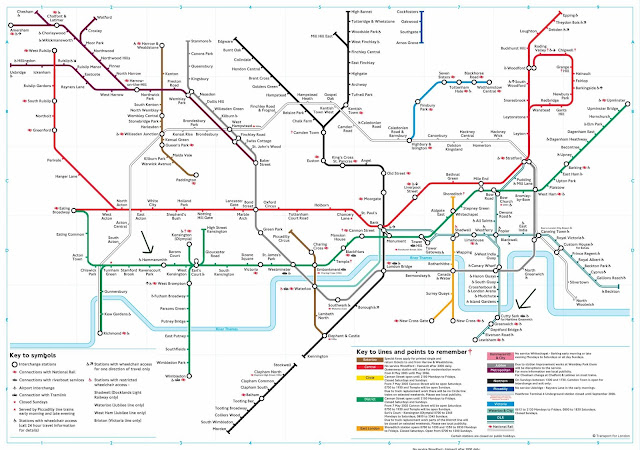 We arrived around 11:15.  Since we had been there before (remember we got there late when we took the boat along the Thames and ended up in the Chapel listening to a lovely men's choral concert?)  we decided to go directly to the observatory which is located in the middle of Greenwich Park on a very high hill.

One of the first things you see when you arrive is The Shepherd Gate Clock mounted on the wall outside the gate of the Royal Greenwich Observatory. The clock, an early example of an electric clock, was a slave mechanism controlled by electric pulses transmitted by a master clock inside the main building. The network of master and slave clocks was constructed and installed by Charles Shepherd in 1852. The clock by the gate was probably the first to display Greenwich Mean Time
to the public, and is unusual in using the 24-hour analogue dial. 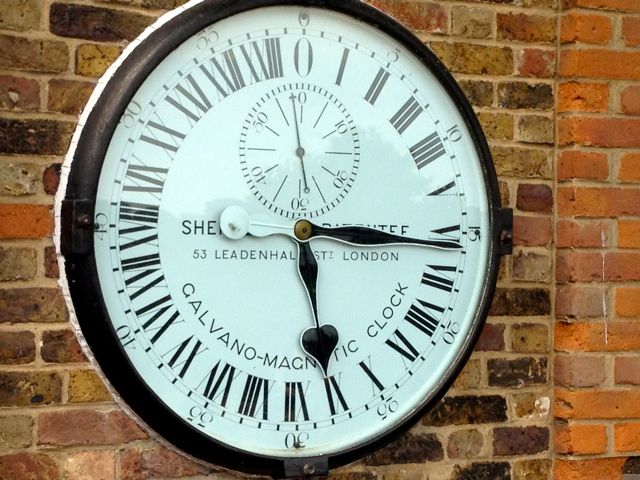 It was quite a trek up and when we got there, we discovered that it cost 5.50 pounds to get in to the observatory.  Don said, "Bugger me that!"  He was so pissed that he had to walk all the way the bloody hill only to find out they wanted money.  So he refused to go in!  Loren, too, didn't seem interested and said he didn't want to go in but would walk around and take a look at the free areas.  I had come all this way to learn about Greenwich Mean Time- so I paid my concession fee (that means "senior rate) of 5.50 pounds and entered the observatory.  I have to say it was a bit disappointing.  There was no real explanation of what Greenwich mean time was, but there was a fairly long queue of people waiting to get their pictures with one foot in the Western Hemisphere and the other in the Eastern Hemisphere.  I thought that was totally cool, so I queued up.  There was a man in front of me, and I said, "Do you understand this?"
"I think I do," he replied. 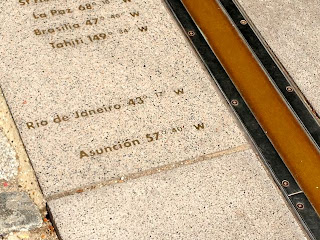 There was a long line with different cities etched in to concrete around it with numbers. Rio de Janeiro for instance had 43 degrees next to it.  The guy thought that the Greenwich mean time was O degrees longitude and the numbers by the cities were their latitude.
"Oh, so Greenwich Mean Time really doesn't have anything to do with time then?" I asked.
"Yes it does," he answered.  "It's where time starts."
Well that didn't make any sense to me.  When we celebrate New Years, it is always Australia the gets to celebrate it first... not Greenwich???
Well this guy had had enough of me, so I just waited for my turn and asked a young girl to take my picture. I'm not sure what the significance of this metal structure is, but many people were standing behind it to be photographed.

In the photo on the right, my right foot is on Los Angeles.  I'm not sure what that means either. 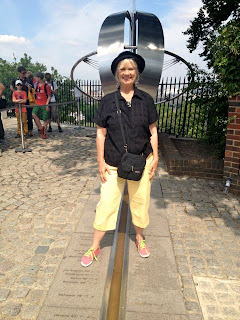 When I was just about to leave, there was an announcement that a presentation explaining the history of the observatory was going to start in the courtyard in 2 minutes;  I decided to stay.  This woman was quite dramatic and had a 20 minute monologue all about the beginnings of Greenwich Mean Time. 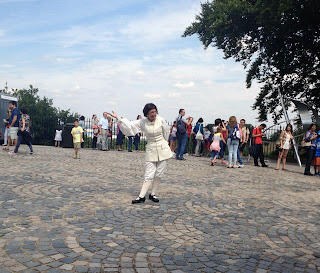 A Frenchman came to the court of Charles II saying, "Monsieur, I know how you can tell where you are at sea.  If you use an inventory of the stars and know where they are in the night sky at a certain time, you will be able to know where your ships are."  But alas, Charles II didn't have an inventory of the stars.  He needed to build an observatory. 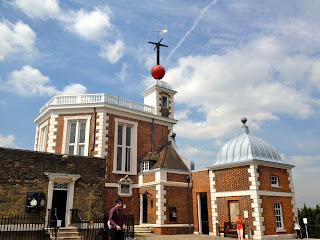 Christopher Wren said, "I know the perfect place.  There is a hill in the middle of Greenwich Castle."  Charles II loved the idea as he already owned the land.  There had been a tower there in the days of Henry VIII which Wren used as the foundation.  He built a beautiful octagonal structure with very long windows all around so the sky could be observed from all around.  Unfortunately, because Wren used the existing foundation, no window looked directly North and no window looked directly South; the observatory was askew!

(That red ball you see was added almost 200 years later in 1833 to help everyone synchronise their clocks to GMT.  It still drops daily to mark the exact moment of 1 pm (13:00) year-round.) 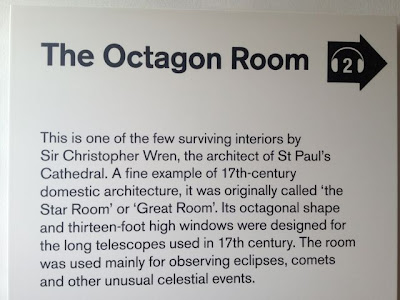 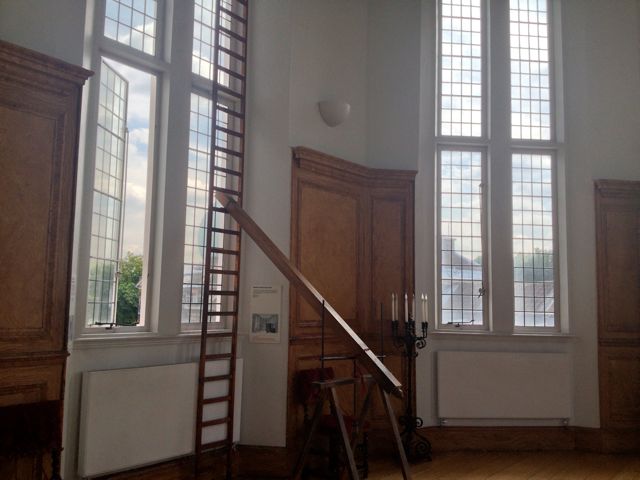 After I left the observatory, Loren and I had a quick bite to eat.  We had no idea where Don was.  He disappeared shortly after we arrived on the top of the hill and was no where to be seen.  I parted ways with Loren as he wanted to go visit the National Maritime museum, and shortly thereafter, I bumped in to Don who was ready for a pint! 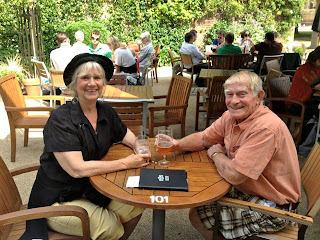 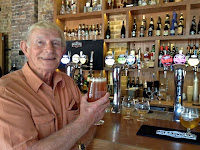 We went to the Mean Time Brewery and had a break.

Then Don went to see the Painted Hall where he ran in to Loren.

The Painted Hall is part of a Naval Hospital built on the orders of Mary II who had been inspired by the sight of wounded sailors returning from the Battle of La Hogue in 1692.  She ordered the King Charles wing of the Palace to be remodeled as a naval hospital for wounded sailors.   Sir Christopher Wren and his assistant Nicholas Hawksmoor gave their services free of charge as architects of the new Royal Hospital. 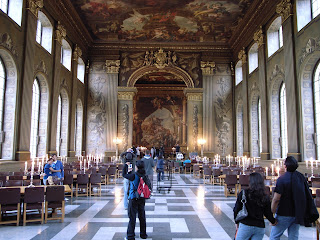 King William Court is famous for its baroque Painted Hall, which was painted by Sir James Thornhill in honour of King William III and Queen Mary II (the ceiling of the Lower Hall), of Queen Anne and her husband, Prince George of Denmark (the ceiling of the Upper Hall) and George I (the north wall of the Upper Hall). After the hall was painted, it was thought to be too regal for the wounded pensioners and was never used!!

We left Greenwich around 4:00 and wended our way back to Hammersmith. Don immediately set to work making his delicious mushroom chicken dish.  We had a lively dinner conversation, topped off with pineapple and honey yogurt for dessert.  But the men were not completely satisfied, and they needed to have a look at the chocolates that Barbara had brought just two days ago:  Have a look yourselves!! 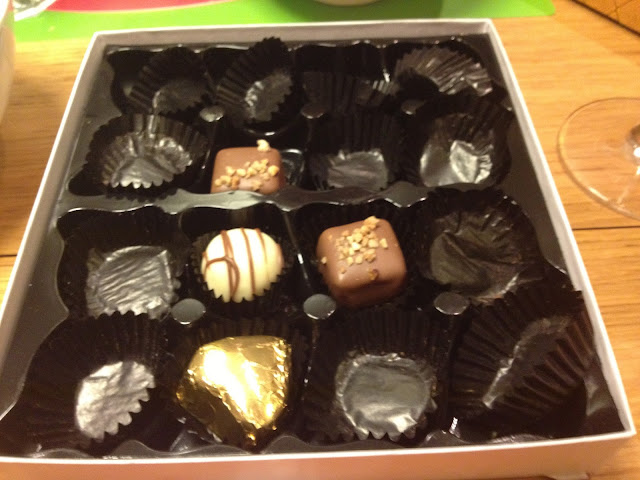 When I left them at the table, there were three candies left...  I'm not sure if that count is accurate as you read this.

Posted by nanwebware at 2:55 PM