I Reached My Goal!


Do you remember when my sister Janet asked me before I left what my goal was for this trip and I responded that I wanted to live like a local Londoner... well, today I feel as if I reached that goal!  I left the house with Loren and Don and we all boarded the Picadilly Line.  The guys were going to the Victoria Albert Museum and I knew that wasn't my cup of tea.  They got off at South Kensington and I continued on to Covent Gardens where I waited a short time in line at the TKTS booth and got two wonderful tickets for Loren and me to see the matinee of Top Hat. 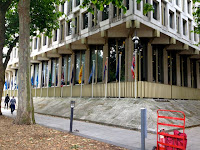 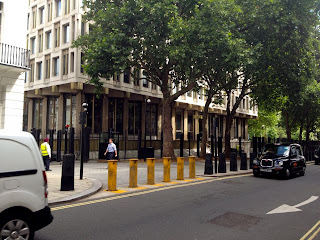 Then I decided to go to the American Embassy.  I wanted to see what it looked like, but my sister had told me that there was a high alert- mainly for Americans in the Middle East, but she had heard that ALL Americans traveling abroad should go and register at the embassy.  So I boarded the Picadilly Line again and went down to Hyde Park Corner.  I had looked up the address of the embassy and it said Grovesner Street.  The subway let me out at Grovesner Square.  I asked a man if he knew where the US Embassy was.  He said there were several embassies on a nearby road, but he didn't think the American one was there.  I told him it was on Grovesner Street and he looked totally puzzled.  "Isn't this Grovesner Place," I asked.  He still looked perplex and said this was Grovner Place.

Is Grovesner an English word?  How can the "es" be silent?  I have found the pronunciation of many places to be very odd.  Like Leicester Square is pronounce Lester;  Chiswick is pronounced Chisick;  Gloucester is pronounced Gloster.

At any rate I began going towards where the man had pointed to, but found a taxi cab driver who told me it would be a ten minute walk and gave me directions.  After ten minutes I began looking for an American flag.  I was on the right road, but I didn't see anything that looked like the embassy.  Finally I asked someone and he pointed across the street to a very large, ugly building.  "That's the US Embassy?"  I asked incredulously.  "Where is the American Flag?"
"Dunno," he responded.

I went up to a guard and asked if I could get in to the embassy.  "Do you have an appointment?"

"No, but I need to register," I told him.  He directed me to the front of the building. 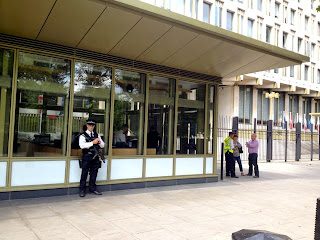 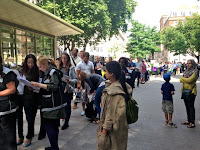 There were police with long rifles standing there.  Then further down I saw a long, long line of people.  The line was so long I couldn't see the end of it.  There was a sign saying, "Visa Applications Queue Here."

I went up to one of the officials who were helping keep the line moving.  I told her I was a U.S. citizen and I didn't need a visa, but I was told to come and register.  "Why do you need to register? " she asked.
"Because of the high alert," I responded proudly!!
She said she didn't know anything about a high alert but for me to wait just a minute.  She took out her phone and called someone and said, "I have a US citizen here who says she needs to register because of the high alert.  Do you know anything about that?"

After she hung up she told me that there was no high alert, but that I was to check their web page daily to see if anything changed.  So then I said, "I am a US citizen, can I go in and see the embassy?"
"Oh no, not unless you have an appointment."
"So are all these people in line applying for visas?" I asked.
"Yes."
"Then does that mean they are all non-British?"
"Yes."

I was really amazed.  You can't imagine how long the line was.  That many people on a Tuesday morning who were non-British foreigners living in London seeking to come to the United States.  Incredible. 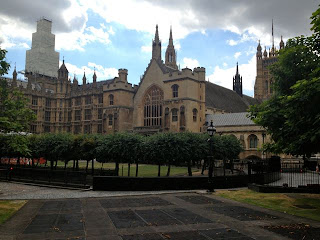 Next stop:  Parliament.  So I ask one of the guards where the nearest Tube station is and he directs me to Baker Street which I realize is the Jubilee Line.  Great! A direct shot to Westminster.  I find the Parliament and get the information of where to get a ticket.  However, it takes 75 minutes to tour the buildings and I have to meet Don and Loren at the White Lion Pub at 1:00 so I don't have enough time.  So I decide to go to Covent Gardens.  Back on the tube, I had to go from Westminster on the Jubilee line to Green Park and change to the Picadilly.  I swear I had to walk underground forever to get from one line to the other, but I did it with no problems.  Now don't you think that's being pretty local? 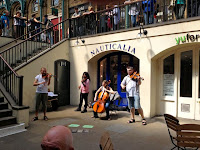 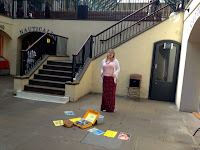 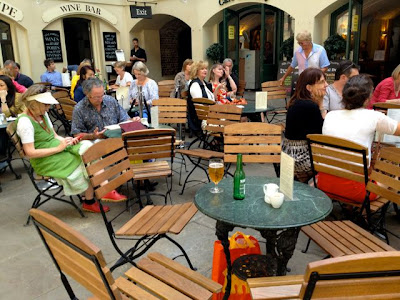 When I arrived at Covent Gardens I went directly to the market, ordered a half pint and sat in the open air court and listened to some great music.  First there was this kind of frumpy lady who sang opera like an angel.  She reminded me a bit of Susan Boyle.  Then a string quartet followed and they were fabulous.  These people are not just your street amateurs;  I think they must be students at some music school.  But it was a perfect down time from my crazy morning travels. 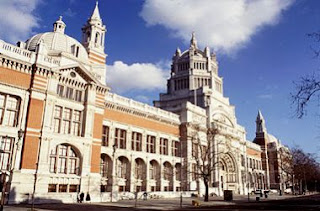 I met Don and Loren and we had lunch together.  They had gone to the Victoria and Albert Museum in the morning.  The V&A is a magnificent building housing an enormous array of different kinds of art.  Don visited the more classic exhibitions.  He learned more about clocks as a follow-up to this tour of the British Museum.  Don has a very old antique grandfather's clock at his home in San Jose.  Today he discovered that the main reason those clocks were built so tall was because of the pendulum, invented by Christian Huygens in 1659.  The pendulum improved the accuracy of the spring driven clock, but it needed to be a certain length for accuracy - therefore the long cased clock.

Don also saw some wonderful Rodin sculptures noting that they seemed much larger than those at the Cantor Museum in Palo Alto, famed for its Rodin pieces.  Next he went in to the Islamic room which he really liked.  There was some gorgeous pottery and an ornate Koran.  He also saw an Abadin Carpet that had belonged to a military ruler.  It had 340 knots per inch and measured about 50' x 20'!  Because it was so old, it was only illuminated at certain times; otherwise the room was dark.

Don's last stop was Medieval Europe where he saw a half suit of armor worn for tilting and a Virginal which is a precursor to the harpsichord.

Loren took a more contemporary tour of the museum first going through the "History of Fashion" exhibit. 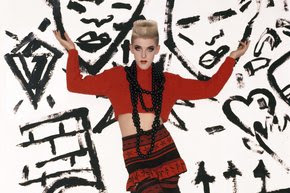 Spanning four centuries, the V&A’s Fashion collection is the largest and most comprehensive collection of dress in the world. The exhibit that Loren went to is called, "Club to Catwalk showcasing the bold and exciting new looks by the most experimental young designers of the 1980's.

His next stop was The Memory Palace.  This sounds like a fascinating experience.  It is based on a book by a British author, Hari Kunzru, who has been a journalist and writer for many years.

Kunzru is fascinated with UFOs and as a youngster often imagined a close-encounter type experience with them.  His novel is set in a future London, hundreds of years after the world’s information infrastructure was wiped out by an immense magnetic storm. Technology and knowledge have been lost, and a dark age prevails. Nature has taken over the ruins of the old city and power has been seized by a group who enforce a life of extreme simplicity on all citizens. Recording, writing, collecting and art are outlawed.
The narrator of the story is in prison. He is accused of being a member of a banned sect, who has revived the ancient ‘art of memory’. They try to remember as much of the past as they can in a future where forgetting has been official policy for generations. The narrator uses his prison cell as his ‘memory palace’, the location for the things he has remembered: corrupted fragments and misunderstood details of things we may recognise from our time. He clings to his belief that without memory, civilization is doomed.

Twenty graphic artists and illustrators were asked to "re-create" Kunzru's story which they are calling a "Multi-dimensional book."  At the end of the exhibit viewers are asked one question:

Over a pint, this is what Loren told us he wrote down:

Standing alone on the prow of a ship in an inky part of the night and watching for other ships crossing Atlantic.  The sound of the waves was a symphony to my ears.
This memory of when he was in the Merchant Marines just came to him.  He hasn't thought of it in years!! 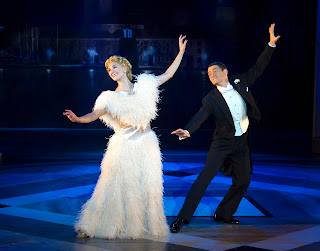 After lunch we parted ways:  Don going to the British Library and Loren and I going to Top Hat.  I mistakenly thought that Top Hat was based on the story of Fred Astaire and Ginger Rogers but it was actually a very popular movie that the two of them starred in in 1935 and which has been revived as a musical.  It is everything one would want in a Broadway or West End musical.  Irving Berlin provided the music, the ballroom dancing and tap routines are fabulous to watch, the costumes are breath-taking with the elegant style of the times, the sets are amazing transforming the stage from a ballroom to a hotel lobby to a Venice courtyard in magical ways, and the acting was absolutely superb. 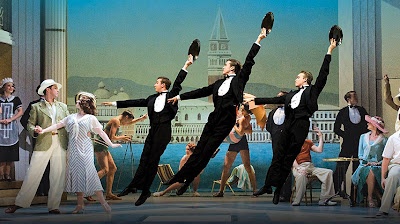 And, perhaps most amazing of all, both the male and female leads were understudies!!  I can't imagine that the original cast for those roles could have done it any better.  The audience was enchanted and gave them three curtain calls.  It was a fabulous afternoon! 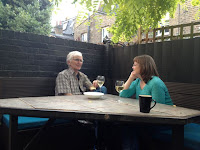 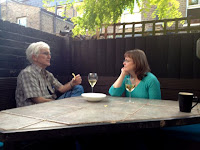 We rushed home as Loren's cousin, Barbara was coming for dinner.  Loren met her on King Street, I came home ahead of them and found, much to my surprise and delight (as it was my turn to cook dinner) that Don had already prepared dinner and set the table.  We had a delightful evening with Barbara who came laden with British chocolate and Australian wine.  She was our first dinner guest - and in all probability our last, but it was such fun entertaining in our London flat!!