I was so exhausted last night I crashed at 9:30!  When I awoke, I was determined to slow down the pace a bit for today.  Don, on the other hand, was determined to be out of the house by 9:30- which he was.  Off he went, first to the West End where he purchased tickets to Phantom of the Opera and Les Miz.  He has seen these musicals before but loves the music and wants to see them again in London. After Don got his theater tickets, he went to the British Museum.  His first stop was the exhibit of Clocks and Watches.  He discovered that clocks were invented because the sun dial was not an accurate way to call everyone to church. 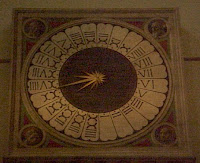 The oldest clock in England was built in 1386 and is in the Salisbury Cathedral.  There was a replica of it at the British Museum. 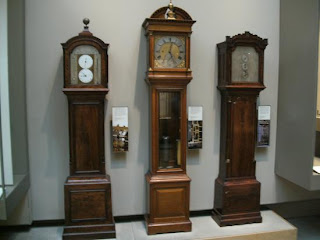 Grandfather clocks developed in England and German from 1690-1710.  They were made to replicate the clocks on the towers of churches so that everyone could see them. 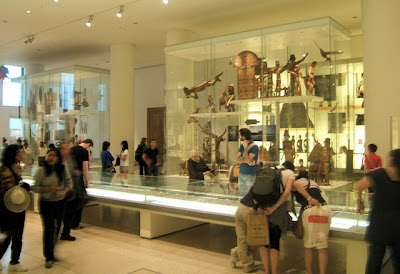 The next room Don went in to was the Hall of the Living and Dying.  In this room there was a long flat table of all the pills taken in a lifetime by the average person.  The number is 14,200 and the majority of those 14,200 pills are taken in the last ten years of life!!!

He also learned that the Aborigines bury their dead for one year.  Then they exhume them, break the bones and paint them with ochre and put them in a tall vertical cylinder which they decorate and place outside.  Then annually they have a feast to celebrate the person who died.

The final exhibit he went to was to see the Rosetta Stone.  It was discovered by Napoleon soldiers in 1799 and contained a creed written by the Egyptians in hieroglyphics, in the Demotic language and in Greek.  Because the archaeologists knew Greek, they were able to decipher the other two languages which up to that time had been unknown; it took them 25 years to break the code. 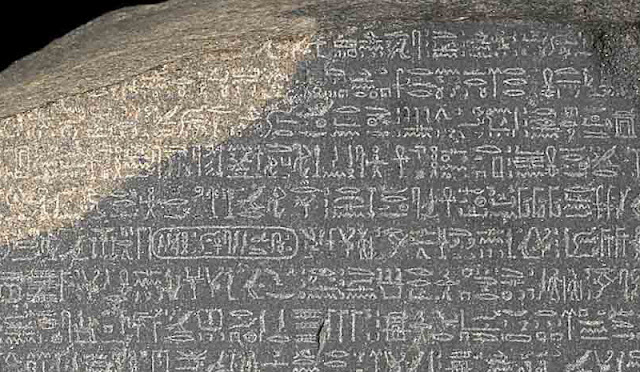 Loren and I set off together at a more leisurely pace.  We got out of the house around 10:30 and made a stop at the Brackenbury coffee house/delicatessen to spend a bit of time with the locals.  Then we walked down to our Hammersmith Tube stop which is also the bus stop, and since Loren hadn't taken a double decker bus yet, we decided to go to the West End to get some theater tickets by bus.  Loren and I have decided that we want to see Top Hat which is a musical about Fred Astaire and is supposed to have some fabulous tap dancing in it.  We also want to see something other than a musical and have decided to see August Wilson's Fences.

Well taking the bus was a mistake in a way as it took us a very long time to get to Covent Gardens.  On the other hand we had a great view - front row of the upper deck - and saw the bustling city all around us.  One thing that the Churchill War Museum has made me realize is the incredible devastation and destruction that was wrought on this beautiful city during WWII.  When I see an old building with wonderful detail and statuary, I think to myself, "That building must have been spared."  Today, on our bus ride, I was able to see the old and the new side by side. 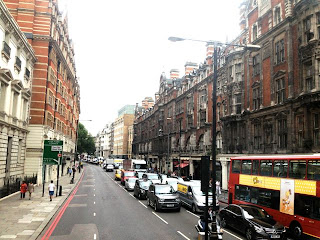 The buildings on the right are obviously old with worn brick and design.  The brick building on the left has been built since WWII, so I am presuming that what had been there before was bombed.  I find looking at London as pre-WWII and post-WWII a very interesting perspective. 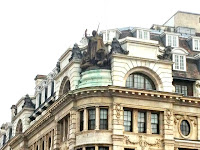 The bus dropped us off at the theater and we discovered that we couldn't get discounted tickets at the box office until the same day. The guy told us we might try the Leicester Square TKTS booth. It's odd, but the Mama Mia box office gave us great tickets the day before.  We were a bit disappointed as by this time it was about 1:30.  "Should we go to the British library as planned, or go back to Leicester Square to get the tickets," Loren mused.
I volunteered to go back up and get the tickets and told Loren to go on to the Library.  That way, I could get home, do some grocery shopping, finish the laundry... remember my goal was to act like a local... what better way!

This next part is Loren's accounting of his part of the day.  He left me, boarded the Piccadilly Line for St. Pancras.  St Pancras Station is an enormous Victorian railway station. 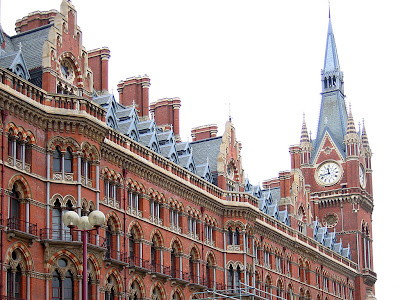 It was opened in 1868 by the Midland Railway as the southern end of its main line, which connected London with the East Midlands and Yorkshire. When it opened, the arched train shed was the largest single-span roof in the world. After escaping planned demolition in the 1960s, the complex was renovated and expanded during the 2000s at a cost of £800 million with a ceremony attended by the Queen and extensive publicity introducing it as a public space.  Loren was quite excited about it.  The public space was about 3 football fields long filled with shops and restaurants and the famous St. Pancras Hotel.  As he wandered he saw an upright piano at the end with a sign that read, "Sit Down And Play."   It was occupied, so Loren kept wandering and discovered at the other end of this enormous space there was another piano which was being played by a hopeful, but not so good heavy-set matronly woman!!  That was enough to inspire him, so he went back to the piano at the other end.  There was someone sitting on the piano bench waiting- not playing.  So Loren asked if he might have a go.  He sat down and played a little Chopin, a little Beethoven.  There were about five or six keys that didn't work, but that didn't dampen his enthusiasm.  There he was playing the piano at the St. Pancras train station.  You'll just have to picture it-  I'm so sorry I wasn't there to take a picture!
Then he wanted to go to the St. Pancras hotel that he had heard so much about. When he asked an official looking person where it was, he was treated a bit gruffly.  "Do you want to book a room?"
"No, I'd just like to see it."
"Well it's a 5-star Hotel."  It costs 500 pounds a night."
"I just want to take a look around."
"Upstairs!"

So he wandered upstairs, walked in, and it wasn't long before someone came over and said, "May I help you, Sir?"  When he said he was just looking around, he was sure that someone had his eye on him from then on.  Loren said the lobby of the hotel was "not impressive."  But then I went on line to get a few pictures and found this.... 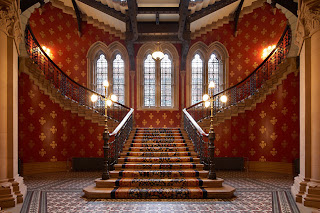 Either Loren didn't get to the "proper" lobby, or his eye sight is worse than I thought!!  Perhaps the security people made sure he was kept away from the 500 pound paying guests!!


Next stop for Loren was The British Library which is a beautiful modern building located just behind the St. Pancras station. 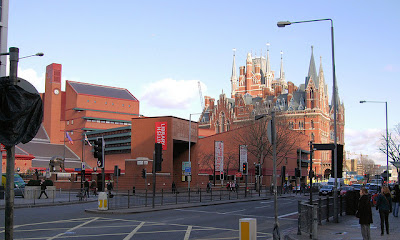 The library is famous for its various exhibits.  The first one that Loren came across was The Poet's Corner and it was featuring Benjamin Briton who set about 60 poems of a variety of poets to music.

Then he went to see the exhibit about Propaganda and said ti was fascinating.  We often think of propaganda as a negative thing, but it has been used for the good as well.  As a matter of fact the term "Public Relations" was invented to take the place of the term "Propaganda" in order to put a more positive spin on it.  The invention of the printing press allowed for the wide-spread use of propaganda, and until recently has mostly been organized by governments and large institutions.  However, with all the social media available to the masses, Twitter, Facebook and YouTube are putting the power in the hands of the common man on the street.  In Loren's own words, "We are just beginning to see the effect of this mass power."

Remember that I left Loren at the theater box office... 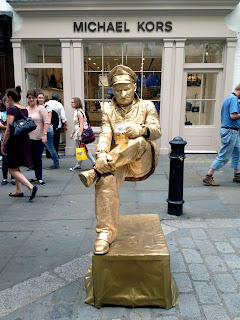 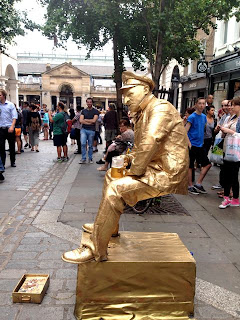 So I wended my way through Covent Gardens, again being charmed by all the buskers.  I decided to walk to Leicester Square which was fun.  It turned out I couldn't get discounted tickets for Top Hat, but I did get some for Fences which we will see today - Saturday. 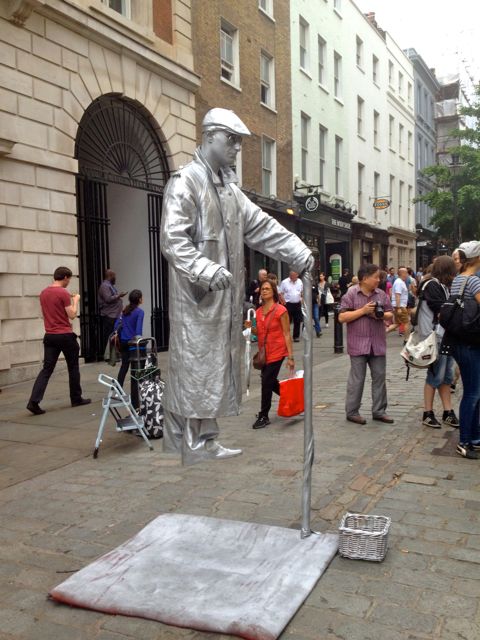 Then back to Hammersmith where I went grocery shopping.  I had brought two cloth bags which were full and I had a ways to walk.  I was about 2/3 of the way home when I passed by the Stonemasons Pub.  Without futher ado, I found myself entering the Pub, ordering a half pint of Honey Dew Ale and taking it outside.  There I was with my half-pint, reading a fascinating book called The Citizens of London, with my two full grocery bags beside me.  HOW LOCAL CAN YOU GET!!! So I asked a bloke if he would mind taking my picture.. 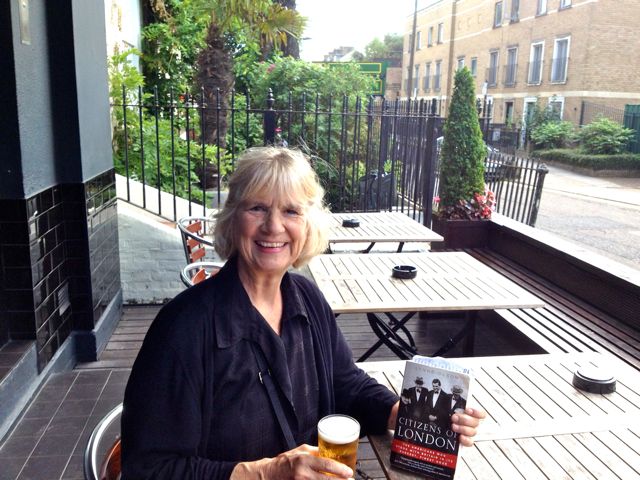