What if I were to ask you to sit in a very narrow, straight backed chair for over ten hours with a barrier in front of you that would prevent you from moving your legs.  Then I would tell you to strap yourself in so you couldn't turn.  I would bring you tasteless food and offer you drink throughout, but if you ordered anything that tasted good you would have to pay for it.  You could get out of your seat with great effort if you needed to relieve yourself in the claustrophobic 2' x 3' bathroom, but then you had to go straight back to your seat and strap in again.  No what would you say if I told you you had to pay top dollar for this privilege!!!   Well that's just what over 300 people did on Tuesday leaving San Francisco at 1:00 pm and arriving at Heathrow Airport at 7:00 am.  Neither Loren nor I slept the entire trip!  The only interesting thing was that I was sitting next to a young guy who was going to Italy.  He plays the keyboard in a local SF band called Pillow Talk that plays all around the world- all expenses paid. They are an up and coming band that you might be hearing from.  You can check them out on YouTube or iTunes!!

As exhausted as we were, our spirits soared as our good friend Don Barker met us at the airport.
Don is a Brit from Exeter but has lived in California for over thirty years and is now an American citizen.  But his English accent is well tuned and his knowledge of the area and customs and "language" is native.  He has been touring Great Britain visiting old friends for the last three weeks, ending his stay with his nephew, Richard who kindly offered to pick us up at the airport and drive us to our house in Hammersmith.

Our neighborhood is charming with tree-lined winding streets dotted with cafes and pubs.

Hammersmith has been described a bit like the Mission district in San Francisco with many young tech and eager entrepreneurs coming in to be in the city and gentrify the area.

The house was described by the owner as "vertical" and that is,
indeed, an apt description.  It has three floors with very narrow, steep stairways going from on to the other.  The main living area and kitchen is on the bottom floor and it opens out on to a charming little patio.

We couldn't honor the advice of friends and stay up all day - it just wasn't possible.  So we asked Don to wake us after a two-hour nap.


Then we set out to find a grocery store.  King Street is a main drag just minutes from out place so we got in supplies for the next couple of days and on the way home decided we had earned a pint at the local pub. 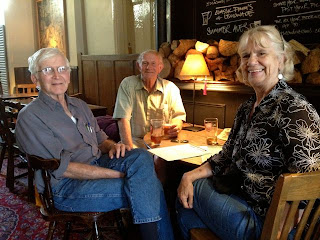 Before I left my sister had asked me what my goal was for this trip.  I told her that since we had the privilege of being in a home in London for three weeks, I wanted to become as much of a native as I could.  Well I am learning that is going to take some doing.  Although we Americans are descended from the British, we have parted ways on many levels.  Just for starters, when walking along the narrow sidewalks, I, by instinct, walk on the right hand side, but I have to re-think that as I have run in to a couple of Brits just on my first day.  Then leaving the grocery store I took the right hand door- but that is the door where people are entering!

So in keeping with trying to be a local, when I arrived at the pub I ordered my first shandy which is ale and lemonade.  It was okay- but I think it might be my last as it was a bit sweet and tasted like a diluted "kid's" drink to me!  It was the Andover Arms Pub and was quite charming.  We were having a lively discussion when Christopher Higham (pronounce Hickum) asked if we were Canadian or from the US.  That started an interesting discussion with the old guy.  He was what I would call a very typical English curmudgeon!  He told us he was an Oxford man who had worked for a large Media company and had done documentaries that were mainly shown in the US.  Then his grandson arrived who is in animation but told us that in England anyone over 40 was considered past his prime so he is also teaching young people to draw as well as playing jazz for some extra money!

After our pint we decided to take the groceries home, put them away, and then return to the very same pub for fish and chips!  It was a "brilliant" evening ("brilliant" is British for excellent or terrific!) and both Loren and I were out like a light as soon as our head hit the pillow.

We have decided to go to Covent Gardens today- Thursday... more later.  Cheerio for now.
Posted by nanwebware at 12:13 AM

Judging by the neighbourhood, the house and the patio, you're up for a lovely stay!!! How I wish I could be there to meet with you!
I totally sympathize with your feelings regarding plane trips - ghastly! But, what can we do?
Right now, in Rio, the Pope is around and the city has practically stopped in order to allow the peregrins to follow the tight programming of his visit. The temperature has dropped so much my feet are stone cold! The city is thrilling and full of young people. To spare Loren's concerns, tell him I'm staying home... don't have your adventurous spirit...
I'll be following your blog. Have fun. Take care. Love you.

Enjoy the time between flights.