Our aim was to get out of the house by 10:00, but with puttering and last minute unpacking and whatever, we didn't get off until 11:30!  The three of us are quite mellow and very compatible, but it's a little like herding sheep in the dark trying to get us all in lock step.  Loren had a bit of an agenda today:  he wanted an extra key to the house as we only had one- a good idea!  He wanted to find a gym where he could get a three-week pass to continue his cardiac re-hab - a good idea. He wanted to get a good street map of London so we could navigate our way around - a good idea.  Then he also had it in his head that he needed wash clothes as the Brits don't seem to use them and we hadn't borught any of our own.   Then of course there is his usual mode of operandi where he needs to stop and read every bulletin board along the way and stop to see any and all activity that's going on around him such as the ethnic food market that we found comes every Thursday or the historic plaques - all of which must be read along the way. 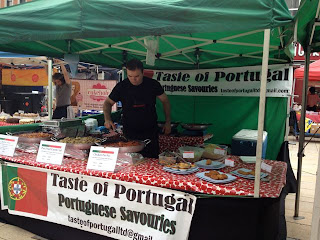 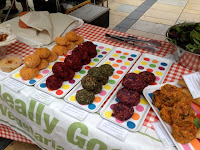 Don, on the other hand is a fastidious engineer who sets goals and aims to achieve those goals.  He had suggested that we go to Covent Gardens today as our first foray in to downtown London.  We all embraced that as a good idea, but it was the getting there that was just a bit problematic.

After getting the house key and signing up for the gym we found our way to King Street and the Hammersmith stop on the Picadilly Tube Line. 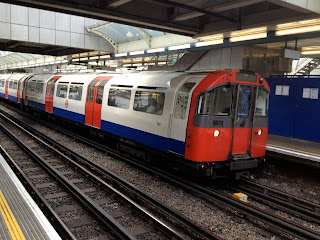 We had to get our Oyster Cards and top them off and now we're good to go anywhere!  I love the London Tube.  It is so efficient, you can go anywhere, and I get such a chuckle every time they say, "Mind the Gap!"  When we got off at our Covent Garden's stop there were people waiting to go up on the Lift.  We decided that was a very good idea when we passed the stairs with a sign saying, "198 Steps to Exit."  The Underground is a veritable Catacomb, and it is said that during WWII people would go down in to the bowels of the Tube during air raid drills!!

By the time we got to Covent Gardens it was about 1:00.  We were all feeling a bit peckish but decided that a pint was in order before we found lunch.  If there is one thing we all agree on it is our visits to the Pubs! 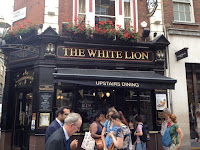 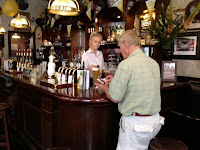 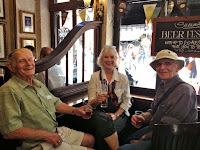 After our pint, we found a great place that had been recommended to us called Priete Mange  (excuse my French!) where we got a sandwich to renew our energy.  We thought we were going to go to Covent Gardens and see the activity and the buskars and street drama, but after a circuitous route and several stops we ended up at the National Portrait Gallery. 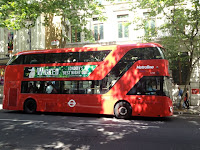 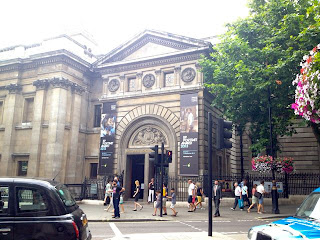 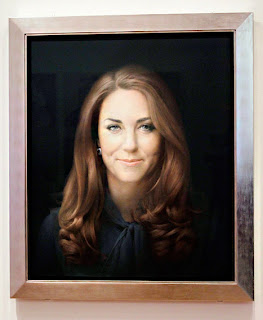 Many of you know I am not a huge fan of museums, but the National Portrait Museum fascinated me.  There were Elizabethan portraits of royalty, a lovely oil painting of Elizabeth with her sister Margaret having tea with her parents and modern British heroes like Mick Jagger.  Most of it was painting although there were also some amazing photographs.  Among some of my favorites were Kate Middleton - although I don't really think it flatters her, Beatrix Potter, and Maggie Smith. 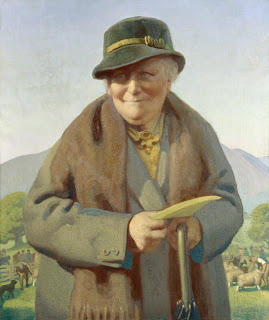 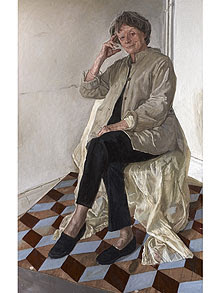 By the time we finished walking through the Portrait Gallery it was almost 4:00 and we were pretty beat.  So we got back on the Tube and headed back to Hammersmith. 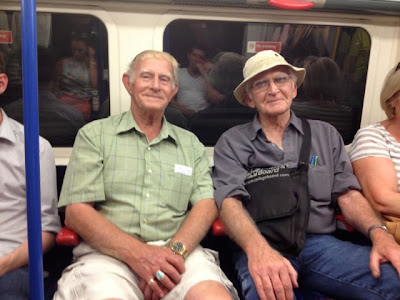 Of course we had to stop off at a pub to reward ourselves for a satisfactory day!.

Posted by nanwebware at 1:29 PM

I posted a comment yesterday, but it's not been published yet. Maybe it (and this one) will be posted when you're finished with your chats!
I love the way you describe the different agendas when more than one people is part of a travelling group. Of course there will be bumps along the way, but they'll probably be happily taken care of.
The pubs seem to be the place where everyone agrees on! Remember me when you're having your pint!
Looking forward to your next post.

Love reading this and get many a chuckle over you trying to herd these two codgers around! How funny that you ended up at the Portrait Gallery instead of Covent Garden ;) Looks like the weather is ok ~ I had thought there was a heat wave underway. Glad all is well, that you've recovered from your awful flight, and look forward to more entries. xox to all 3

I'm there with you guys. Love the blog. Thanks, Nancy. When you run out of ideas do consider checking out Churchill's WWII digs. Surely Don has been there so use him as a veto or second to that idea.
By the way, weren't pubs invented to prevent dehydration? Enjoy.

Hi Nancy & Loren; you 2 sure get around! We loved your blog and today had time to reread some of your older ones....Nancy, you have quite a flare for writing...does that mean a book-signing party is in your future??
The photo looks real good of you 2....we were tasting the beer and Fish 'n'Chips right along with you.
Hans & Barbie