Are We Human, Or Are We Dancers

I am taking the title of this post from a song my sister Janet introduced me to because we saw Chorus Line today at the Palladium Theater in London and the cast seemed almost beyond human with the talent and energy they displayed.

But I am ahead of myself...

We had ordered tickets on line that we were going to pick up at the box office and the play didn't start until 3:00, but Don insisted that we get off at 9:15.  When I questioned what the hurry was he seemed a bit astonished.  "We get up at bloody 6:30.  Why would you want to wait around here any longer?"  So Loren and I conceded and we were out the door at 9:15.  We boarded the Tube to the Oxford Circus station.  We had to take the Picadilly Line, and every time we stopped there was this lovely English woman's voice that said, " You are on the Picadilly Line destination is Cockfosters." 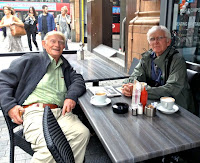 Our tickets had not yet been delivered to the box office so we decided to get a coffee and then head down Oxford Street which is the shopping district of London.

My sister, Janet, is a very hip 65 year old and listens to all the "in" singers like Pit Bull, Usher and Adelle.  Through Skype she told me she had just discovered a new singer that she loved.  His name is Labrinth and he is a black English rapper.  She tried to get his latest album but it wasn't being sold in the U.S. and she had to get it from the U.K. so she asked me if I would keep an eye out for her.  I had asked Loren's cousin where I might find this CD and she said at any HMV store which are all over the city. 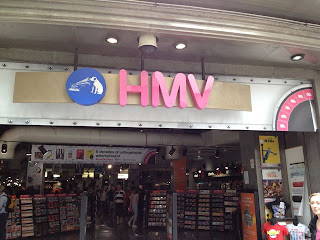 So I told Don and Loren to keep an eye out for an HMV, and lo and behold there was one right there on Oxford Street!!   It turns out that HMV stands for His Maters Voice and was made famous by a painting of Nipper the dog with his nose in a "gramaphone!"   At any rate we went in to HMV which turned out to be a huge warehouse with thousands upon thousands of CD's and DVD's in row after row.  I went up to a young man and told him I was looking for the latest CD of labrinth.  He said he had heard of it and asked if it were Rock.   Not really knowing, I said yes.  So he led us to the Rock section down the alphabet from A to L.... and no Labrinth.  So he said he was going to go look it up.  After a bit, I see this young man waving his hand.  He had elicited the help of another young colleague, and it turns out it was in the Rap section.  I picked up the CD and asked if it were the only one as I didn't see the song that my sister had specifically asked for.  "What song is that?" the young man asked.
"Beyond Beautiful," I replied.
"Oh, that's on that album," he countered.
"Yes," I said, "I see it now.  And there is Express Yourself too!  That's my favorite,"  I said, speaking with authority, as I had heard this song when my sister first told me about this guy.
"Oh, isn't that a great song.  That's my favorite too!  We Brits aren't very good with Rap, but I think Labrinth is going to go far."
I felt very hip and in and with it conversing with this young Brit, and I have to say I think he was a bit surprised this senior American was so up on a new up-and-coming British Rap artist.

We continued down Oxford Street with the destination of Covent Gardens in mind.  We wanted to see the buskars and then go to the Box Office of Mama Mia to see about getting tickets for tomorrow. 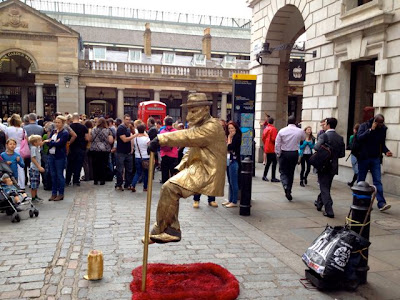 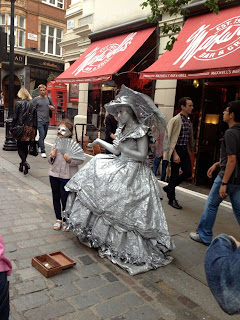 Covent Gardens reminds me a lot of Fisherman's Wharf.  I can't imagine a native Londoner wanting to go there, but it was fun and lively albeit a bit hokey.

We found our way to the Mama Mia box office and got some great seats for tomorrow at half price- because we were seniors!  Then we saw the theater where Lion King was playing.  Loren and I had been to London about 15 years ago and had gone to see Lion King.  Before the show, we had dinner at a lovely pub, where we had to walk up the stairs, and Loren had a Shepard's Pie that he still talks about.  Before we left on this trip, Loren said he really wanted to try to find that very same pub.  We knew it was in the vicinity of where the Lion King was playing, so we decided to try to find it for lunch.

And can you believe it, there it was on the corner!  The Wellington! 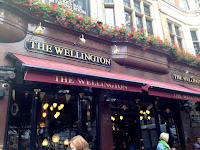 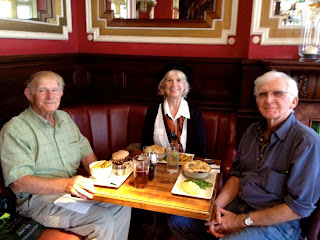 After lunch it was time to wend our way back to the magnificent Palladium Theater where we went to see A Chorus Line.  We had terrific seats in the fourth row of the balcony.  There was an older couple sitting to my right, and after a bit the woman asked me if I were from London.  "No," I said, "I'm from California."
"California!!"... it turns out that they have three sons and four grandsons (just like me!) and one of her sons married an American and is living in the San Fernado Valley.  I got to talking with the woman who was very nice.  Of course I steered the conversation on to Kate and Will and baby George and she said she had been presented to the Queen.  "You were presented to the Queen," I cried.
"Shhhhhh," said her husband.
I lowered my voice, but found out that he was a councilman from the district of Windsor and they had been asked to dine with the Queen.  The woman told me the Queen was quite delightful and talked to her and asked her about her family.  Her husband, the Councilman, said, "I thought Margaret was far more interesting!!"
Then I asked the lady, "Oh my, what did you wear?"
And she replied, "It's not what I did wear, it's what I couldn't wear.  I was told beforehand that I was not to wear blue as that was the color that the Queen was going to be wearing and no one else must have the same color!" 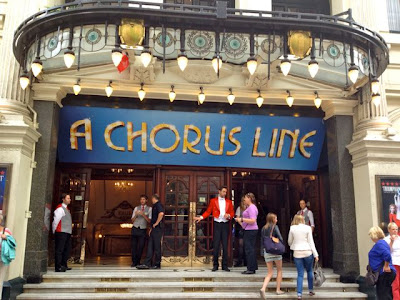 The play was fabulous.  There was a cast of 18 young, energetic, very talented people.  There was no set- only a blank stage.  The play went for two hours with no intermission and I was rapt for the entire time. Centered on seventeen Broadway dancers auditioning for spots on a chorus line, the musical is set on the bare stage of a Broadway theatre during an audition for a musical.   There were really only two familiar songs:  What I do for Love and One -neither of which you come out humming; yet it is memorable.  What is most amazing to me is that these actors have to do it all again tonight.  Amazing! 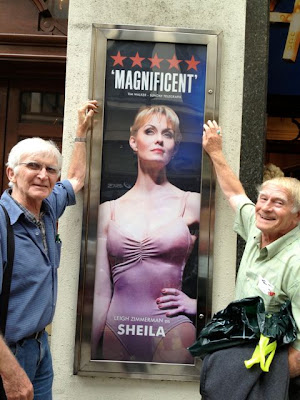 Don and Loren also enjoyed it!!! 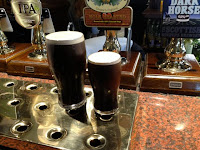 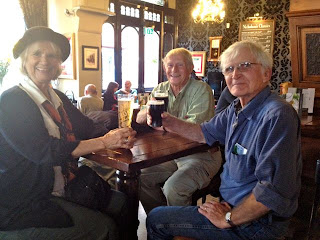 But it was a long day, and the Tube ride back to Hammersmith was a hot one, so of course we had to have a pint.  We chose The Swan where Loren and Don had a Guinness,  and I had what has become my pint of choice, a Honey Dew.

We came home and had a fabulous meal for dinner.  Don grilled the burgers and sausages we had bought yesterday from John the butcher, and I made a lovely salad.  The sausages and burgers were excellent!   So it's off to be for me, and another adventure awaits us tomorrow.

Posted by nanwebware at 3:21 PM

Another great day! I am 99% positive Michael and I had a meal at The Wellington when we were in London in...'87? Will try to confirm. And, please ask Don what agency he uses for house exc ~ you too...we're ready ;)

loved your blog all about your day at the theater and finding my cd. thank you so much. I hope you like mama mia as much. I should be home from about 3:00 on. I hope we get to talk.
xoxo miss you so.
Janet