Never was so much owed by so many to so few 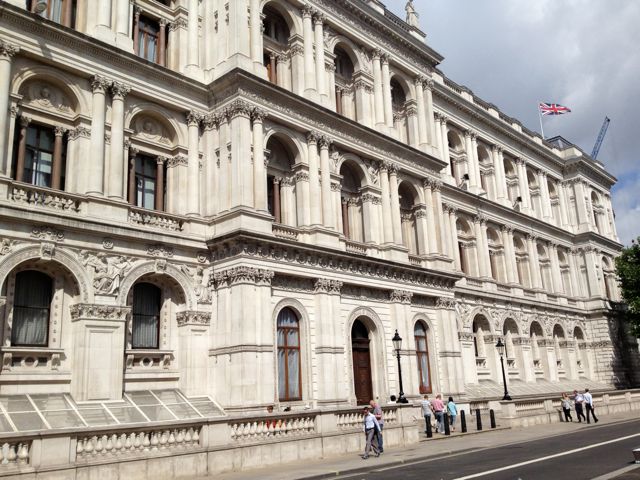 This is Whitehall, the Treasury Building which lies just up the street from 10 Downing Street and just across the way from the Parliament Buildings and Big Ben.  What very few people knew at the time was that Churchill had erected his War Rooms in a concrete reinforced bunker in the basement of this building.  People worked there and never told their families;  Hitler never discovered that all the British was tactics during WWII were coming from this hidden headquarters, and none of the English people ever knew of it's existence.  Following the surrender of the Japanese Forces the men and women who worked here left one day, leaving everything behind them, and never went back again. The doors to the Cabinet War Rooms were locked on 16 August 1945 and the complex was left undisturbed until Parliament ensured its preservation as a historic site in 1948. Knowledge of the site and access to it remained highly restricted until the late 1970s when the Imperial War Museum began the task of preserving the site and its contents, making them accessible to as wide an audience as possible. In 1984 the main war rooms opened to the public.

As many of you know, I am NOT a museum person, but we arrived here at the Churchill War rooms at 10:15 and didn't leave until 3:30 and I was totally enthralled, infatuated and  entranced for the entire time. 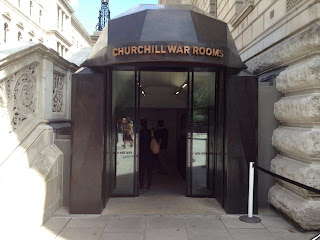 In addition to an audio tour, there were hands on displays where we could listen to Churchill talking on the phone to Roosevelt, or watch a video or various employees reminisce about working there.  There was a demonstration showing where Churchill traveled during the war years - over 100,000 miles in all; a time line where you could pick any day during the war and it would say what Churchill was doing.  We learned of his courtship with Clementine, saw such realistic dioramas that I felt I was sneaking in on the actual operations.  Here is a brief tour: 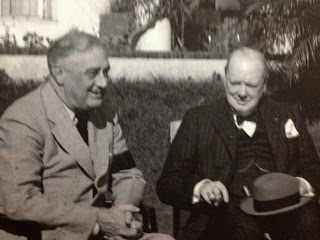 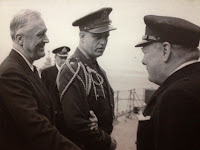 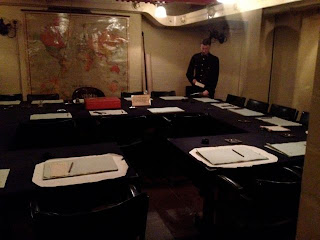 This is the room where Churchill met with his Cabinet.  Until the opening of the Battle of France, which began on 10 May 1940, Prime Minister Neville Chamberlain's war cabinet met at the War Rooms only once.   Following Winston Churchill's appointment as Prime Minister, Churchill visited the Cabinet Room in May 1940 and declared: 'This is the room from which I will direct the war'.  In total 115 Cabinet meetings were held at the Cabinet War Rooms, the last on 28 March 1945, when the German V-weapon bombing campaign came to an end. 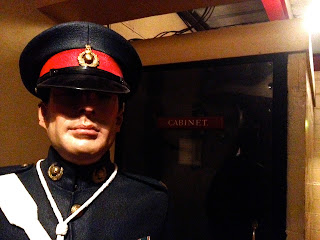 Here a guard stands outside of the Cabinet Room.  (He's not real!!) 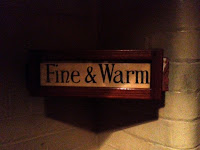 This sign was changed daily to let people in the underground bunker know what the weather was like above ground!


Although most people who worked with Churchill had the utmost respect for him, he was not an easy many to be around.  He often disagreed with his war team, and let them know in his gruff and often crude manner.  But it was said, unlike Hitler, Churchill never overruled his Military Command. 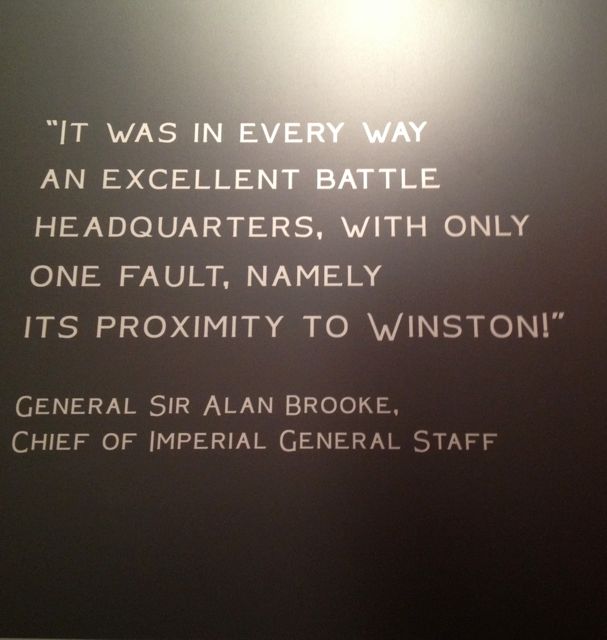 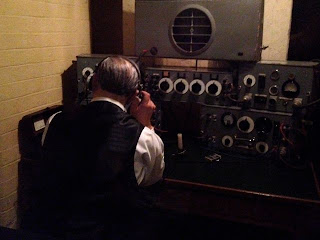 This was a small room where the BBC broadcast all the Churchill speeches. It was very important that the BBC be in the bunker so that the "truth" could always be available to the people and not be in jeopardy of being bombed and destroyed.  Churchill made four wartime broadcasts from the Cabinet War Rooms. 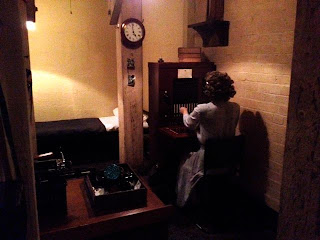 Many women were employed to send messages to the front.  What can't be seen very well in this picture is the gas mask that rests in the box on the table.  These communicators were expected to continue their work no matter what. 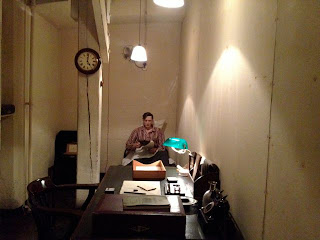 Many of the personnel and officers slept in the bunker.  Here is a typical bedroom with a desk of an officer. 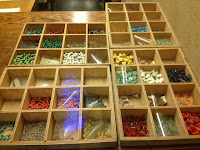 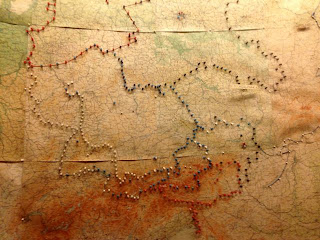 Once operational, the facility's Map Room was in constant use and manned around the clock by officers of the Royal Navy, British Army and Royal Air Force. These officers were responsible for producing a daily intelligence summary for the King, Prime Minister and the military Chiefs of Staff 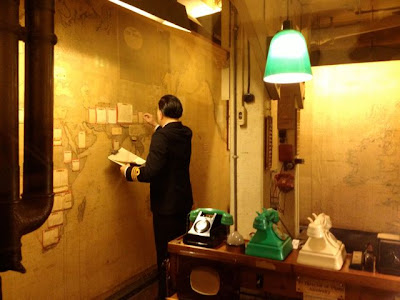 Note the telephones along the desk.  The ones with the green tops were used for encryption while the white phone was a direct line to Churchill. 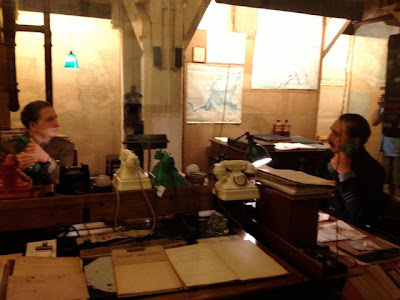 These rooms were left exactly as they were after everyone went home the day the way was over.  Thus, they were able to replicate it very accurately and to great detail.  On the desk of the man to the right are four sugar cubes placed carefully on a piece of paper.  After the war when they began to explore the abandoned War Rooms they opened up the drawer on this very desk and found a stash of sugar cubes which were being coveted and saved by this officer. 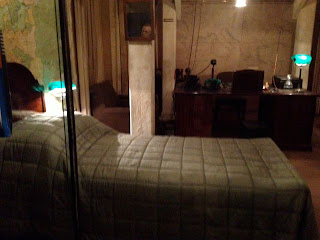 This is Churchill's bedroom in the bunker.  Although he only slept here three nights, it was said he took an hour's nap every afternoon.  It was from this bedroom that he broadcast his speeches that were transmitted by the BBC.

Churchill's trademark was his cigar and he loved his drink.  He was quoted as saying to a top Saudi Arabian leader,
"Booze and cigars are my religion!"


He was also know for his honesty and sense of humor:

A lady went up to Churchill in a bar and said, "Sir, you are drunk."
Churchill responded:, "Lady, I may be drunk, but you're ugly.  I'm going to wake up in the morning and I will be sober, but you will still be ugly."

Lady Astor wanted to let Churchill know he had gone too far and said to him, "Winston, if I were your wife, I'd put poison in your coffee."
Winston replied, "If I were your husband, I'd drink it!"

Spending this day in the War Room bunkers underneath the corner of Whitehall was an amazing experience.  I felt I really go to understand in a small way what the British people, especially Londoners, had to go through during the war.  Starting on 7 September 1940, London was bombed by the German Luftwaffe for 57 consecutive nights.  More than one million London houses were destroyed or damaged, and more than 40,000 civilians were killed.  Over a period of 267 days (almost 37 weeks), London was attacked 71 times.  Yet the British were determined to "carry on."  They continued to go to work, navigating through the ruble of the previous night's bombings.  The Germans were ruthless; the British seemed doomed.  Yet Winston Churchill embodied and emboldened the character of his people:

"Success is not final, failure is not fatal:  it is the courage to continue that counts."

"If you're going through hell, keep going."

It is so clear that England and the Allies could have so easily lost WWII.  It is also clear that Winston Churchill is one of the major reasons we won! 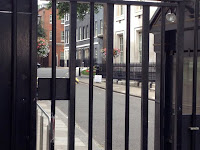 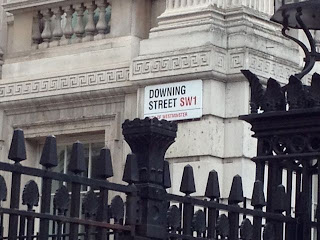 Leaving Whitehall we had to go and take a look at 10 Downing Street which was just around the corner.  There is a guarded gate so you can't get very close, but it was fun to peer in along with other curious tourists. 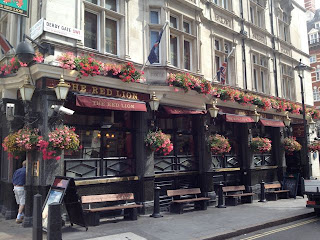 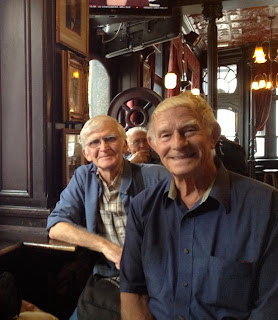 Then of course we had to go get our daily pint.  This is The Red Lion directly across from Whitehall and diagonally across from 10 Downing Street.  They claim in their menu to have served many a PM.

One of the best days so far...

Just a note to say I am enjoying your daily
blog, and living vicariously through your adventures.

Wish I could join you for one of those daily pints...as long as they don't become quarts...

As you know already my love for details, I'm pasting here some information from Wikipedia (which has its flaws) regarding the building which you called Treasury Building: "The department had several London homes until it settled at Horse Guards in Whitehall in 1722, where it was to remain until 1858. Horse Guards and the War Office became virtually synonymous (indeed, Horse Guards is still the official headquarters of the Army). The War Office moved to Cumberland House, Pall Mall for the last half of the 19th century before finally moving to purpose-built accommodation in what is now known as the Old War Office Building." (...) "located on Horse Guards Avenue in Whitehall, London."
As for Whitehall, this is what I read: "Whitehall is a road in the City of Westminster, in central London, which forms the first part of the A3212 road from Trafalgar Square to Chelsea. It is the main thoroughfare running south from the site of the original Charing Cross at the southern end of Trafalgar Square towards Parliament Square. Recognised as the centre of Her Majesty's Government, the street is lined with government departments and ministries; the name "Whitehall" is thus also frequently used as a metonym for overall British governmental administration, as well as being a geographic name for the surrounding area.
The name is taken from the vast Palace of Whitehall that used to occupy the area but which was largely destroyed by fire in 1698. Whitehall was originally a wide road that led to the front of the palace. Trafalgar Square was built at its northern extremity in the early 19th century. The southernmost portion between Parliament Square and Downing Street is named Parliament Street. Combined, Parliament Street and Whitehall cover a distance of about 0.6 mile (1 km).
Whitehall is also widely known for a number of memorial statues and monuments, including Britain's primary war memorial, the Cenotaph."
All this helps me understand all you've written about. Thank you for this great history lesson.

We think that for a "Non-Museum Person, you are faking it really well! Learned a lot from your Churchill blog. Good thing your Apple Genius is so close--that was a close call. We think that, since you're there, Don should fix you two tourists a proper "full English" breakfast, or at the very least you should go out for one and experience this most amazing feast! Won't have to eat for a couple days !
Since you're becoming a semi-avid museum goer, don't forget the Wallace Collection--especially if you appreciate antique clocks.
Carry on,
V&L