We had decided last night that today we would go to Westminster Abbey... well I got the WiFi to work with my computer by bringing it upstairs next to the router,,, Yeah- So I started writing my blog entry and suddenly everything froze.  I couldn't make the cursor move at all.  I tried shutting it down and starting it up again, but alas, nothing...

Well I hate to admit it, but I have an addiction to this computer.  The thought that I wasn't going to be able to get email, write my blog or keep in touch with the outside world had a dire effect on me.  Both Don and Loren were amazingly sympathetic and we decided to head out to find the nearest Apple Store!  Ironically it was in the Westfield Mall in Hammersmith - the same company that has the Westfield Mall in downtown San Francisco. 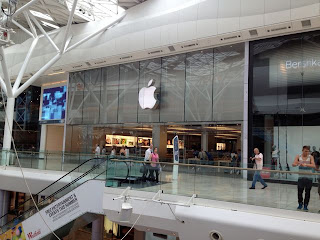 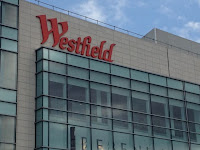 It was a gorgeous mall and what was so amazing was the Apple Store could have been anywhere.  There was the same energy, the same crowds and the same fabulous service from the Genius Bar.  It turns out that my five year old computer is considered "vintage" and in Great Britain, they don't service vintage computers.  But the Genius Guy took pity on me and took a look at my computer.  It turns out that the push bar had stuck.  He was able to unstick it and right now the computer is humming along.  But the genius guy told me it would probably happen again and that when I returned to California I should take it to Apple as there is a law in California that says they must service a vintage computer up to 6 years old!!  Yeah for California!
While I was at Apple, I asked them about my iPhone and whether I could get a local Sim card so we could use the phone while in London,  No problem! So now I can ask Siri where we are and where we are going and we are in good hands! 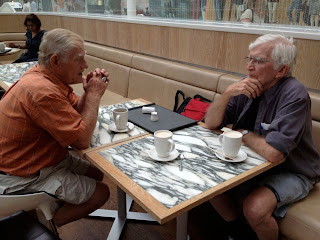 After all this we needed  a break so we found a charming coffee shop, had a couple of lattes and a cafe Americano and got ready for the rest of our day...  Westminster Abbey! 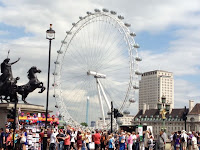 As soon as we got off the Tube stop in Westminster we were surrounded by London landmarks:  The Eye, Big Ben, The Parliament Buildings, Bobbies, and Westminster Abby. 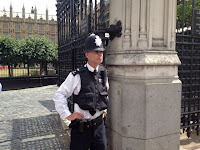 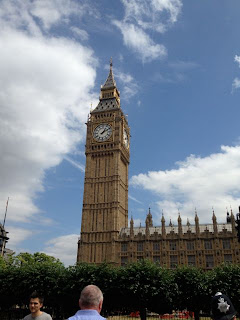 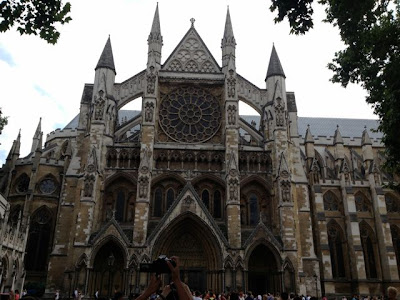 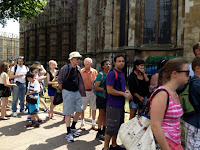 There was a line to get in, but it moved along rapidly.  By this time it was around 1:30 and again we were a bit peckish.  So we decided to go to the Abbey cafe to get a bit of sustenance before taking the audio tour of the Abbey.


The audio tour is narrated by Jeremy Irons... sublime!
Westminster Abbey is steeped in more than a thousand years of history. Benedictine monks first came to this site in the middle of the tenth century, establishing a tradition of daily worship which continues to this day.

Every monarch since William the Conqueror has been crowned in the Abbey, with the exception of Edward V and Edward VIII who were never crowned.  The Abbey contains over 600 monuments  and over three thousand people are buried here.

It's interesting to realize that Westminster Abbey was originally a monastery for Benedictine monks.  The first monks were brought to Westminster in about 960 AD by St Dunstan, then Bishop of London.  No trace of the building to which they came has been found as King Edward the Confessor built a new Abbey on the site, which was consecrated on 28 December 1065.  On 16 January 1540 monastic life at Westminster came to an end when Henry VIII dissolved the monastery and the deed of surrender was signed.

I stood in front of the high altar exactly where many kings and queens were crowned, where Diana's casket was laid, and where Kate and William were married.  The Brits certainly know how to keep their traditions alive and well.


We also saw the coronation throne where the monarch sat after being crowned.

In this picture of Kate and Will's wedding, notice the floor.  This is a Cosmati Pavement and its uniqueness and completeness combine to make the pavement one of the pre-eminent works of art of medieval England. As Jeremy Irons related to me, "Its importance simply cannot be overstated.   Many of the original stones appear to be of antique origin, having been salvaged from destroyed structures of the Roman period, presumably in Italy.  An uncommon but fundamental aspect of the Westminster design is the relationship between the use of colored stones with the Marble matrix. Whereas Italian cosmatesque pavements use white marble as a frame, here the frame is dark. This contributes greatly to the pavement’s magnificence and distinctiveness.

Of course one of my favorite parts of the Abbey was the poet's corner. 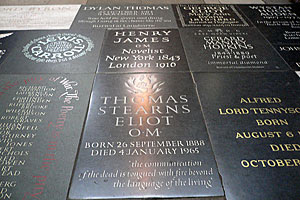 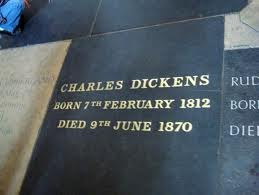 The art, the extravagance, the history, the reverence - these and more made this tour quite remarkable- not to mention all those dead bodies.  Yet one of the most moving is the grave of the Unknown Warrior, whose body was brought from France to be buried here on 11 November 1920. 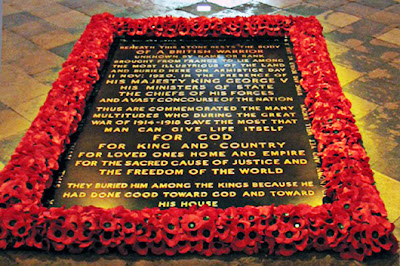 When the Duke of York (later King George VI) married Lady Elizabeth Bowes Lyon in the Abbey in 1923 as she left she laid her wedding bouquet on the grave as a mark of respect (she had lost a brother during the war). All royal brides married in the Abbey since then have sent back their bouquets to be laid on the grave.  It is framed with red poppies and Queen Elizabeth laid poppies on this memorial after the funeral of her mother as a spontaneous gesture.

We were all bushed by the time the tour was over, and of course ready for a pint.  So we hopped back on the Tube and had a lovely refresher at the Thached House which had a beautiful beer garden in the back.  I had a delicious pale ale called Thached House ale.  It is brewed along the Thames and they claim it is the only place in the world where you can get it!  It was quite delicious.

Hurray for your vintage computer! You will eventually have to follow my advice: get a new one!
Up till now, we've seen only ales and no food at all! Are you all on a diet?
I'm enjoying this London tour very much and can see that the days are lovely. Please keep the blog going!

Dear nancy: I'm having fun reading your blog! Makes me want to get my act together and take my kids to see all that history!
-Rebecca

enjoying your blog and glad you are enjoying Hammersmith, London, pubs etc.
In today's FT(weekend edition) there is a nice article on "expert selection of English Pub Gardens" which might be a guide for non museum day trips and if you do not see the article, it refers to a book "Pubs and Inns of England
and Wales" edited by David Hancock which I imagine is available in local bookstores if you are so inclined.
Keep up your ale tasting with suggestions for Americans on your return.

I too have a vintage computer, share your angst, and devotion to Apple Geniuses! Love Glorita's comment ~ all ale no food! I am already longing to plan a trip to London. Keep writing ~ this is wonderful.