We started off the day with a visit to our local Brackenbury Cafe which is just down the road from our house.  It is a very nice little place with pastries, all sorts of coffees, a special ham from Spain, and an assortment of oils and vinegars which you can purchase in different size bottles. 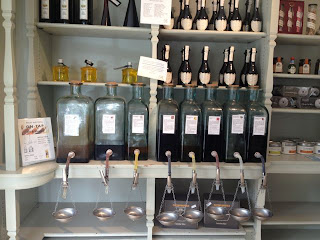 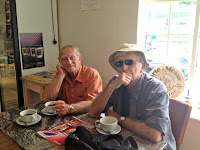 Then we set out on our walk to the Hammersmith Tube line which is a fine, brisk 10 minute walk over to King Street.  The plan was to take a Hop-On, Hop-Off boat ride down the Thames getting off when something interested us along the way.

We started at the Westminster Pier where we had been yesterday, but seeing the same buildings from the river gave them a new perspective.  It was a beautiful sunny day with a river breeze and we were pulling away from the pier at 11:00 just as Big Ben began tolling.  I was overwhelmed with a sense that "Life is Good!"  Directly across from Big Ben is the London Eye.  It is the tallest Ferris wheel in Europe, and the most popular paid tourist attraction in the United Kingdom.  It offered the highest public viewing point in the city until it was superseded by the 805 foot observation deck on the 72nd floor of The Shard, which opened to the public on 1 February 2013.  Fortunately not one of the three of us wanted to go up in the Eye!  We are planning to go to the Shard and view the city from something a bit more stable!


We decided to get off  at the Millenium Bridge stop where the Shakespeare Globe theater is as well as the Tate Modern Museum and St. Paul's Cathedral.  We first walked across the bridge to St. Pauls 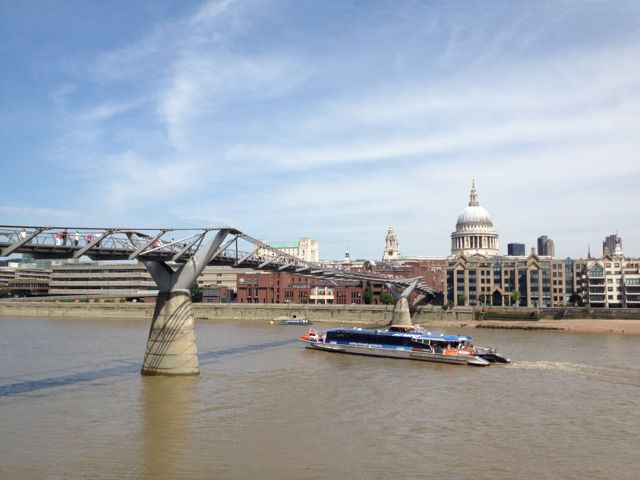 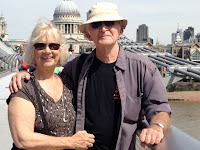 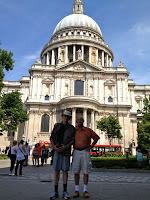 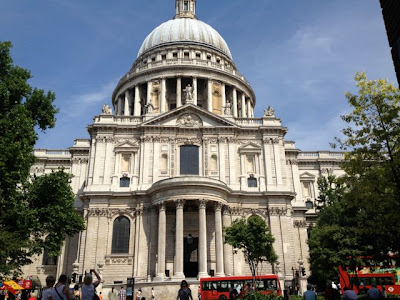 We went around to the main entrance to the Cathedral just as the noon bells were chiming.  It was not just twelve dongs but a panoply of sounds.  The South West Tower houses Great Paul, the largest bell in the British Isles, which weighs 16½ tons. Sadly, Great Paul has not sounded for several years because of a broken chiming mechanism. Also in the South West tower are the three clock bells. The largest of these, Great Tom, was cast by Richard Phelps in 1706 and weighs over 5 tons. As well as striking the hours, by tradition Great Tom is tolled on the death of senior members of the Royal Family, the Archbishop of Canterbury, the Bishop of London, the Dean of St Paul's or the Lord Mayor of London. It was last tolled following the death of HM Queen Elizabeth, the Queen Mother, in 2002.

When we went in to the Cathedral itself, the sound of the bells diminished.  We also discovered that it would cost us to go through the Cathedral.  Since we had just toured Westminster yesterday, we decided to come back out to hear the bells.  This is where surprises began disrupting plans.  If we had gone on with our plan to tour St. Pauls we would have missed the amazing British wedding party that was assembling on the steps.  A woman, obviously a part of the wedding entourage, was bedecked with a fancy hat.  Don leans over and says, "Excuse me, what do they call those hats?"

"Fascinators," she replies.  It turns out she is the aunt of the groom.  Her mother, the grandmother of the groom, was beside her.  We had discovered that Charles and Diana had been married in St. Pauls while Will and Kate had been married in Westminster.  We asked why that would be and the woman said, "Oh they just choose and try to keep it evenly divided." 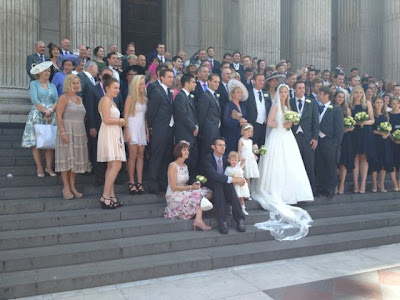 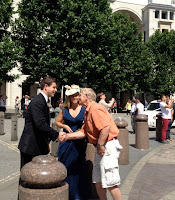 As we were leaving, Don went over and asked if he could take a picture of a well dressed couple.  They posed for him.  He explained that he was from California and wanted to take a picture of the lady's fascinator.  They then told him they were from New York City and that she had gone to the oldest hat shop in London where the Royalty go to purchase her Fascinator!!  It was such a fun experience and we were all aware that if we had stuck with our plan we would never have happened across it.
But now we were a bit peckish so we decided to walk back across the Millenium bridge to find The Anchor Cafe.  We asked Siri (on my iPhone) to direct us.  We walked past the Globe theater along the river bank.  Then Siri took us on some back roads winding around which led us back to the river. 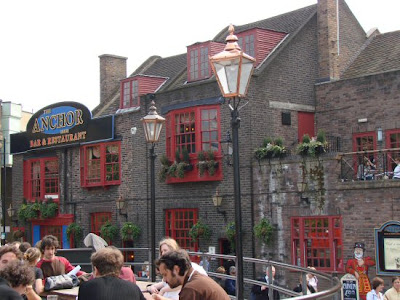 The 1666 Great fire of London devastated the pub and it was rebuilt in 1676 and has since had additions over the centuries. It is the sole survivor of the riverside inns that existed here in Shakespeare's time, when this district was the center and heart of theater land and the Thames was London's principle highway. The Anchor was frequented by many actors from the neighboring playhouses including the Globe, the Swan and the Rose. 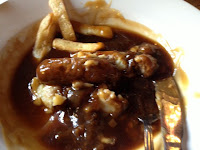 The pub was really old with narrow wooden stairways weaving throughout.  We had lunch up by a garden patio.  Wanting to play the native, I decided to order Bangers and Mash.  Just as my first Shandy was my last, I think I have gotten Bangers out of my system.  They were very gamey and swam in a thick, glaze-like gravy - not quite my cup of tea!!

Don had some amazing looking fish and chips!  And of course the pints we delicious!! 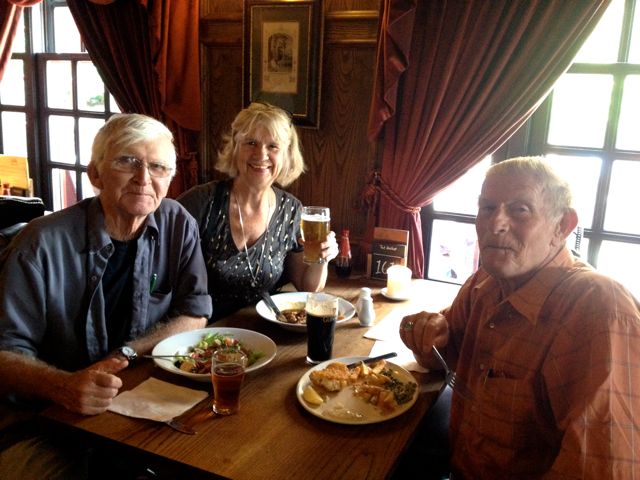 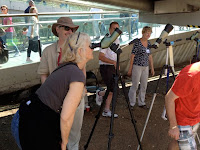 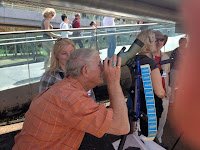 Along the riverbank Loren spotted a line of what he thought were cameras.  They turned out to be telescopes all aimed at the Tate Modern Museum.  Not normally a place associated with wildlife, the Tate Modern has become a favorite summer hunting spot for a pair of peregrine falcons, who return to their original nearby nesting site every year. Perching up high on the art gallery and former power station's chimney, the pair of birds of prey are a big attraction for the many tourist who pass by.  They are hoping to increase the breeding pairs of peregrine falcons in London and the pair that are in residence close to the Tate Modern are a welcome addition to the population. More peregrines live in London than in their more traditional nesting spots in the uplands, due to the illegal shooting of the birds on big hunting estates.

After our lunch we boarded the boat again heading towards London Bridge.  On the way we passed the Shard - the tallest building in the European Union.  We have it on our calendar to go and visit this building and go up to the observation tower. 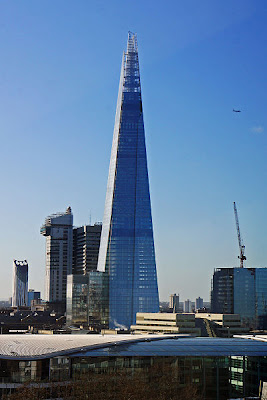 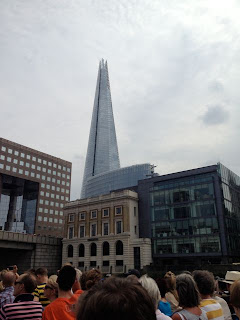 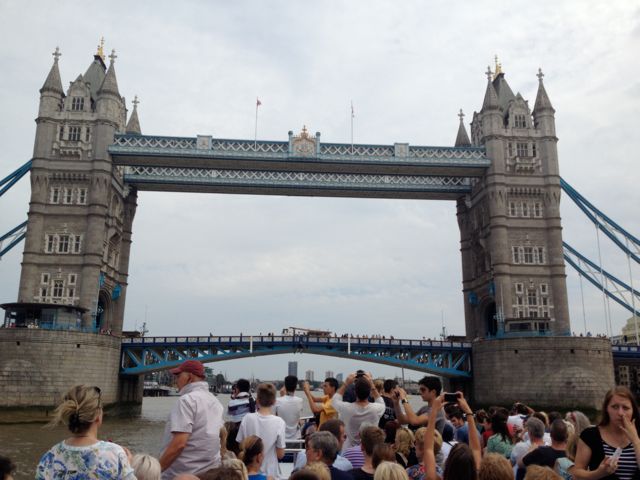 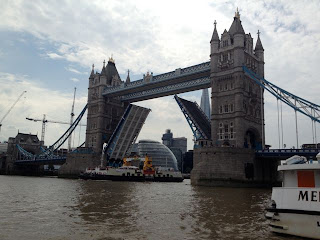 London Bridge is a wonderful sight and very fun to go underneath.  When we drew up to the pier we were treated to the view of the London Bridge going up to accommodate a large ship.

We had to change boats to make our way to Greenwich- something we all wanted to do.  I was fascinated with Greenwich Mean Time and wanted to learn more about it.  The ride took about a half hour.  When we arrived we were in front of the Royal Naval Academy (equivalent to our Annapolis).  It is no longer used as a military school but is now a music and art school.  When we went in to the tourist bureau we were told that the observatory was a 15 minute walk and "It's going to bucket down shortly so you might not want to try it."  Indeed, as we stepped outside, grey clouds loomed ominously.  We hadn't walked very far when the first drops began to fall.  The nearest building was the Chapel which we ducked inside to avoid the elements.  SURPRISE!!! An amazing concert was just beginning - The New Mill All Male Voice Choir.  They sang religious songs, gospel, Gershwin and folk songs. 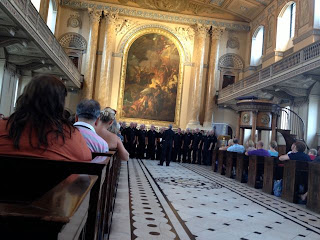 The second song we heard was a welsh love song that Don told us had been his wife, Eryl's, favorite song.  I couldn't help think that maybe that was Eryl letting us know she was with us.  This was yet another time when plans were interrupted and we were given a gift.  By the time the concert was over it was 5:00 and we were ready to head home.  We decided to take the Tube home rather than go back by boat.

Looking for the station, we discovered a wonderful market in Greenwich. 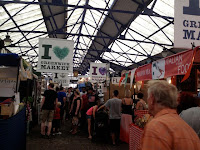 Food at last! I love the serendipity that you are so open to...especially hearing the choir and Eryl's favorite song. Please tell Don we remember very fondly our Welsh evening with them in CA.

What a delight to follow your steps around London! You do have a fascinating view of things, planned or spontaneous, and it makes me wonder how I would react to all this... I'd probably do fine, I guess. What a beautiful city and what a trio of adventurers!
Finally some food!

Again, a wonderful day with Nancy, Loren and Don. Thanks so much for sharing.

Nancy, I've been enjoying your blog tremendously. It reminds me of my one day trip to London on the way back from south Africa. You are certainly hitting some wonderful spots! W.Abbey was a big hit for me. In fact, now that we are in Florence, I've been wondering about the ways in which we are fascinated with the past. Perhaps all of us who are enchanted with the past are, to greater or lesser degrees, uncomfortable with the present. Or perhaps just disappointed by it. Not completely, however; it's not as though we are hopeless or fatalistic. Just not rosy progressives. Just an idea. Glad you got your computer working and are finding a good place for a daily pint.

Florence is different than it was 12 years ago. Not sure how yet, but I'm going to try to see the "present" in it instead of just the past as we take our walking tour tomorrow. Since last we were here, several events have occurred that must have left a mark: 9/11, the US invasion of Iraq and Afghanistan, the economic crisis and big changes in European immigration and demographic patterns. Curious to see what your take on the "London of Today" will be once you've really dwelt within its customs for a while.

Glad you two are having a wonderful time. Dad, nice to see you wearing shorts and getting in some great walks!