Sunday in the Park

We decided not to put any pressure on ourselves today; no time deadlines; no have-tos.  Loren went off to his gym, Don cooked up his orderly breakfast:  starting with a half a grapefruit.  (he even brought his special grapefruit knife all the way from San Jose!!)  Then he had cereal.  Then he cooked up a couple of soft boiled eggs.  (He even brought his own china egg cup all the way from San Jose!!)  Then toast with honey on it!  I wanted to check out the WiFi down at the Brackenbury cafe, so Don and I went there for another cup of coffee and Loren met us there.

The day before I had found a pile of torn paper with writing on it on my seat on the Tube.  I stuffed them in to my bag and this morning I decided to piece them together to see what they said.  I presume they were written to a teacher from some of her recalcitrant students! 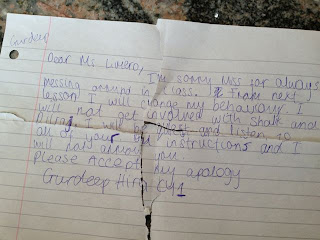 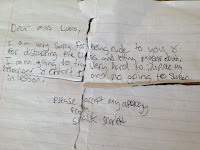 There was also a picture of the students in the class - thirteen of them and all but one were Middle Eastern.  We found this little bit of trivia quite fascinating.

At any rate, we decided to have Sunday in the Park.  Don had discovered that every Sunday at the Speaker's Corner in Hyde Park people would get up on their soap box and rant about something important while hecklers would rebut what they were saying.  Sounded like a fun day so we set off.  We are getting quite adept at figuring out how to navigate the London Tube - what station, what line, what platform, what transfers, etc. 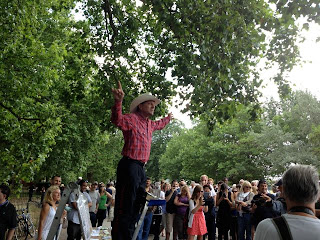 We got to Hyde Park and there was quite a crowd assembled.  A guy in a cowboy hat was railing about "Evilution."  A heckler asked for proof that God created man.  The cowboy yelled back, "Where is your proof for evolution?  You have none- it is on faith that you believe in evolution.  Evolution is your religion, just as my belief in God is my faith and my religion!" 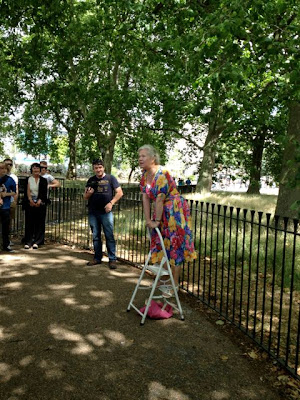 Farther on a little lady in a flowered frock could be heard talking about the youth of today and how decadent they were.  There are no values today.  Young people are having sex and consuming electronics and throwing their lives away.  "But I'm happy doing that," yelled an intelligent looking young chap.

"Then go to America," yelled back the little old lady.  "This is not reality.  You are living a virtual reality and you will go nowhere." 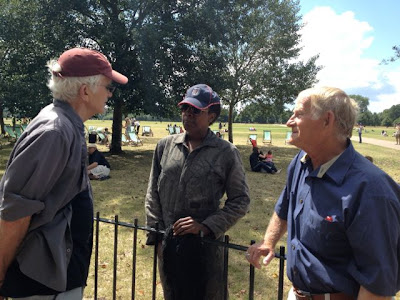 Then a woman approached Don to ask if he had a cigarette.  He gave her one of his cigars and the two of them engaged in a lengthy conversation.  It turns out she was from Jamaica and had been living in London for 12 years.  She was very articulate and spoke extremely intelligently and cogently.  When Don asked if she had studied at University she replied, "I did a 4 year course in IT.  I did that because young children playing around me knew things that I didn't know.  It was obvious that computers were here to stay, so  I said I would take a course in technology so that I could know what the young people already knew." 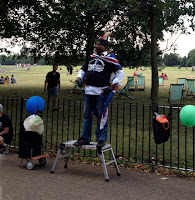 There was a man draped in a Union Jack talking of racism while another black man waved flags and spoke of German nationalism. 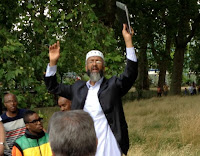 And a Muslim railing against the evils of alcohol while a somewhat inebriated man in the audience said alcohol was what was keeping him alive!!

It was all quite a spectacle.  We talked with a nicely dressed woman who was walking  away from the Speaker's Corner and she said, "It's all just Rubbish!  Rubbish I say."  I must say I agree with her, but it was a fun experience just the same. 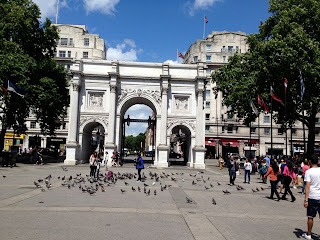 By this time it was around 1:00 so we went and got a sandwich walking through the Marble Gate to get there. 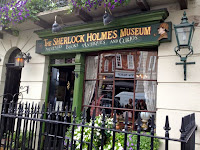 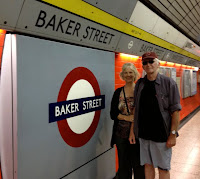 Then we decided we were only a stop away from Regents Park so why don't we go over and see if there might be a concert in the Park.  The Tube stop for Regents Park is Baker Street of Sherlock Holmes fame. 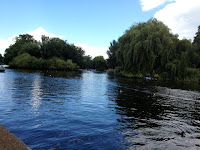 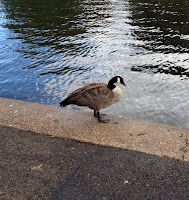 Regents Park holds a special place for me as that is the neighborhood where I lived for two years from 1947-1949 when my father was transferred there with the Bank of Nova Scotia.  I remember going to the park to feed the ducks and the geese.  It is a beautiful park and although we didn't come across a concert, we did have a bit of a "bucket down" and took refuge in the band stand. 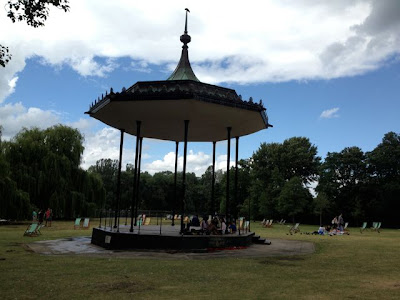 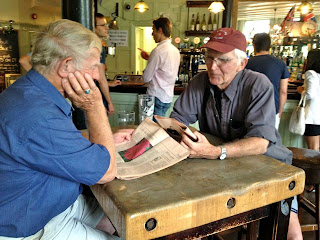 Now of course it is about 3:00 and we're ready for our first pint of the day.  We walk over to a pub, Loren brings our the Financial Times, Don and Loren begin reading the paper and I start on the crossword puzzle.  A great day!!

We took the Tube home and are having a bit of a lie down.

Posted by nanwebware at 7:28 PM