The Candle Burns at Both Ends

Well we have been in Cuernavaca since Wednesday,  and I feel like I have come home.  This is our twenty-second year coming down here.  Over those twenty-two years we have been in  eight different houses.  This one we've stayed in for about six years, and we have gotten to know the staff.

Natalia, the cook, actually began many years ago as a young maid, but she had aspirations to be a cook so she learned from the cooks where she worked and one year she took over the kitchen.  When Loren's brother, Fred, found this home, it came with a housekeeping staff but no cook, so Fred asked Natalia if she would be willing to come and be our cook, which she has done for the six years we've been here.  Natalia has two children, Cassandra and Raul - we actually knew them both "in-utero." Now Raul is 18 and Cassandra is 16- beautiful children.

The house is owned by a Mexican woman who lives in Mexico city and never comes here.  The home was given to her as a wedding present from her father.  A darling family lives here year around.  Gilberto and his wife Lucy take care of the home and the grounds.  They have two young children.  Then, during our stay, there is an extra young girl who comes in to help Lucy.  Her name is Rosa and she looks like a young girl, but I am told that she is a grandmother!  The staff don't speak any English, but they are so delightful and full of smiles.  Somehow, if we need anything, we are able to communicate and our desires are met. 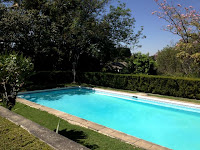 There are also two dogs who come with the house.  The big yellow lab's name is Milk and the smaller mutt has a name something like Mayhem. 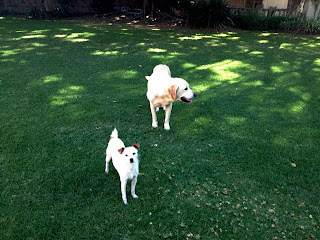 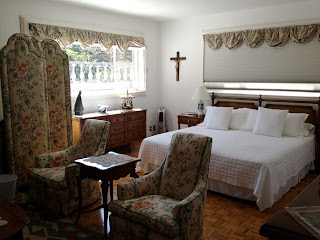 The house has six bedrooms and Fred and Kat have most of them filled from the time they get here in late January to the time they leave in March.  Friends, mostly from Chicago, Illinois and Lakeside, Michigan, come for 4,5 6 days; some for a week.  When we first began visiting, I was still teaching, so we would come for one week always during President's week as that was my vacation break.  Now that I'm retired, we have been asked if we wanted to stay longer.... "Is the Pope Catholic?"  I would stay as long as they would have us;  I love this place.  This year we are staying two weeks.

Right now there are two other couples staying here.  Vicky and Bob Parsons we met last year.  They are delightful and Vicky is a real go-getter.  Last year Vicky was chairman of the board of Wellesley.  This year she has joined the board of the Newberry Library in Chicago and is very involved in that.  She was a partner in an investment firm and still consults with them - amazing energy!

John and Jane Chapman we had never met before, but it turns out that John's brother is Paul Chapman who was the Headmaster at Head-Royce for the past twenty-five years and he just retired.  I knew Paul somewhat as he was on the Board of The San Francisco Day School while I was Upper School Head;  I have a great deal of respect for Paul- he was an excellent Head.  Another coincidence is that Jane went to Hollins College.  I graduated in 1966 and she graduated in 1970 so we didn't overlap, but it is really fun having someone recognize Hollins for being a great place and sharing some stories. 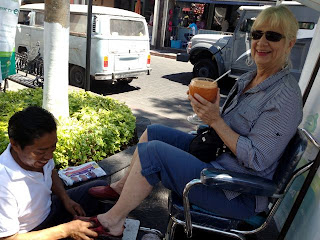 Loren was a bit under the weather yesterday, but today we were both feeling pretty much back to normal, so we went down to the Zocolo to go to our hangout - The Cafe Universale - where I have a Jugo de Zanahoria con hielo. (Carrot juice with ice.)  I NEVER have carrot juice except when I'm here;  here I have one grande every day!!  Right across from the Cafe Universal is a line of about seven shoeshine men.  Fred has a favorite, Mario, whom he goes to year after year.  I had a pair of shoes the color of a kind of burnt orange that I love, but they have gotten a bit scruffy over the years so I decided to see if Mario could shine them up for me.  Mario must have spent 20 minutes, first cleaning then shining, then waxing then buffing and I now have a pair of new shoes!!  While I was sitting there, fred went back to the Cafe Universal and got me my carrot juice and brought it over to me!  I was in seventh heaven!!  Then, after I was done, Fred got his shoes shined too! 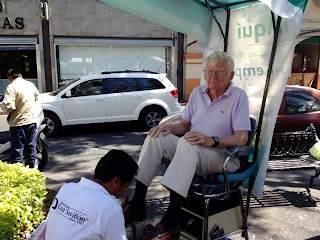 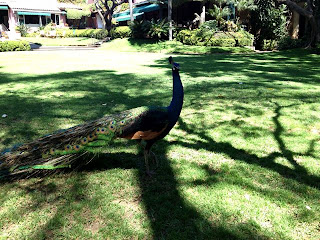 Natalia's one day off is Friday, so on Fridays all the guests take Fred and Kat out for lunch and dinner.  Today we decided to go to Las Mananitas for lunch.  I'm thrilled about this as Las Mananitas is one of my favorite places here in Cuernavaca.  They have exotic birds strutting around the grounds.  An albino peacock jumped up the trunk of a tree right in front of me the last time we were there.

They also make the best margaritas in town!! 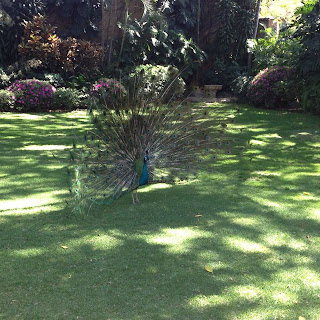 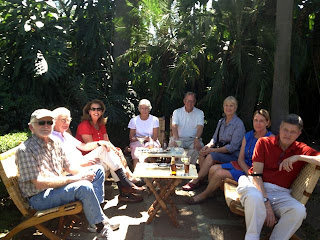 We had a delightful afternoon, went to a silver shop after lunch and Loren bought me
a beautiful silver ring, then back home to the pool.

We will be going to a French restaurant for dinner:  Le Provence.

Finally, it is Edna St. Vincent Millay's birthday - and George Washington's as well!  I always like to recognize Edna on February 22nd as it reminds me of the wonderful gatherings we had back in Washington, Connecticut when we would throw her a birthday party and guests would gather and share their own poetry or read their favorite poems.  I always remember, too, when I was setting up over at Susan Tidyman's house.  We had balloons' I had baked a birthday cake; we were getting things ready, when the doorbell rang.  It was a man delivering a huge arrangement of flowers.

When I read the card it said, The candle burns at both ends 'tis such a lovely sight.  But oh my friends and ah my foes it will not last the night,"  and it was signed, Edna and Norma.  Edna had long been dead, but her sister, Norma, was overseeing Edna's estate at Steepletop, NY where she was running a writer's workshop.  A graduate student, doing her dissertation on Edna knew about our party and had told Norma about it.  Norma was so moved that we were honoring her sister, that seh sent the flowers!


And so we will continue to try to burn the candle at both ends!
Posted by nanwebware at 4:11 PM