The Legacy of Richard Burton

Anticipating our trip to Puerto Vallarta, I let my mind fantasize that it would be a short romantic getaway for the two of us.  We'd be on the beautiful coast of Mexico in a luxury condominium enjoying sun, margaritas, mariachis and good food.  It would be a wonderful time for good conversation and strolls along the beach, hand-in-hand together.

Well, they say "life is what happens when you're making other plans."  The flu hit and our luxury condominium has turned in to a luxury sanatorium where we are still recuperating!  BUT last night was a tiny taste of what could have been.  We went to the Hacienda San Angel for dinner.

Because Hacienda San Angel was owned by Richard Burton, I decided to read up on him a bit, and he was more of a Lothario than you could imagine.  Apparently he went through the entire chorus line of Camelot in one night!!  He two and three and four-timed all of his wives and made each of his conquests feel like she was the only one!

Looking past that,  he did leave us with some wonderful things, and we discovered one of these last night.  As many of you know, the Night of the Iguana was filmed here in Puerto Vallarta.  That was in 1964 which is when he began his first torrid love affair with Liz Taylor.  He was married to LIz from 3/64-6/74 for the first time and then again from 10/75-12/76 for the second time.  He didn't waste much time because Burton married Susan Hunt the same month he divorced Liz for the second time - 12/76.

Apparently  Burton's love of Puerto Vallarta lasted way after he finished filming the Night of the Iguana as he purchased the Hacienda's main villa as a Valentine's Day gift for Susan in 1977. The cult classic film put Puerto Vallarta on the map as a favorite vacation spot for the international glitterati, including Burton’s ex, Elizabeth Taylor, who owned a house mere blocks away from Susan’s. Perched on the hillside above the famed Nuestra Senora de Guadalupe Church, the villa, aptly named Casa Bur-Sus, embodied coastal charm and
Mexican architectural tradition. 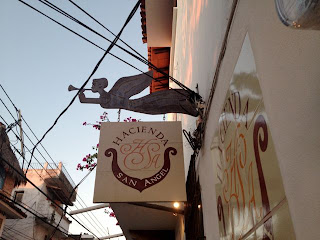 In 1990, an entrepreneur from San Francisco, Janice Chatterton,  purchased Casa Bur-Sus from Susan Burton to use as a vacation home. After splitting her time between San Francisco and Puerto Vallarta for ten years, she decided to relocate to Puerto Vallarta, and began to spearhead a major renovation. The renovation of Casa Bur-Sus soon became a new found passion for Chatterton, and when she was presented with the opportunity to purchase an adjacent villa, she eagerly snapped it up, renovating it and coining it Hacienda San Angel which is where we had dinner last night.
Janice is a fascinating character:  she is an animal activist and started the first SPCA in Puerto Vallarta.  There were small poodle like dogs roaming around the restaurant last night, and I wondered what that was all about.  I also overheard a patron ask a waiter if the lady behind us was Janice and he was told, "Yes."  At the time I didn't know the significance of that, but Janice Chatterton, a rather elegant, very thin elderly woman, was dining at the table next to us!!

The restaurant is in the center of Puerto Varllarta but our taxi snaked around narrow streets going higher and higher with each turn.  The space is gorgeous with open tiled terraces, fountains and statuary all around. 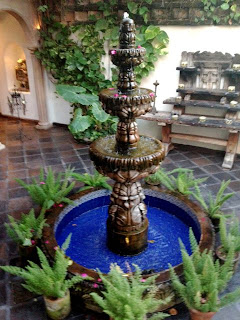 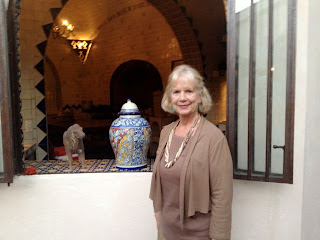 It is a hotel and the room rates start at around $600.00/night.  The restaurant is up on the second floor.  We arrived just as the sun was setting and there was something very magical about it all. 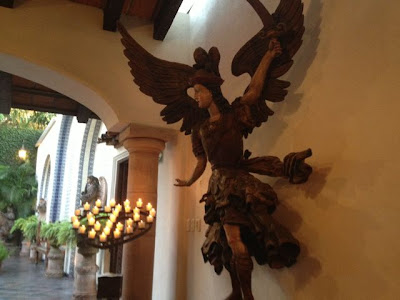 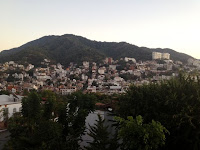 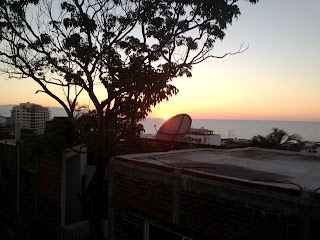 After we were seated and Oscar, the waiter, brought us our margarita, a dozen formally clad mariachi singers appeared.  There was a kind of stage for them with the setting sun as the backdrop.  They were very good and it couldn't have been more romantic!! 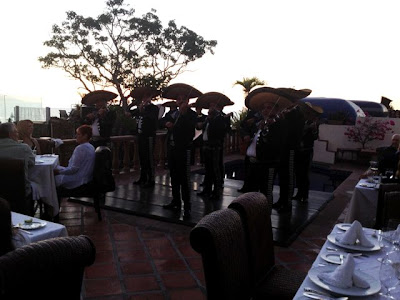 At one point one of the musicians came right over to our table and began playing a solo!! 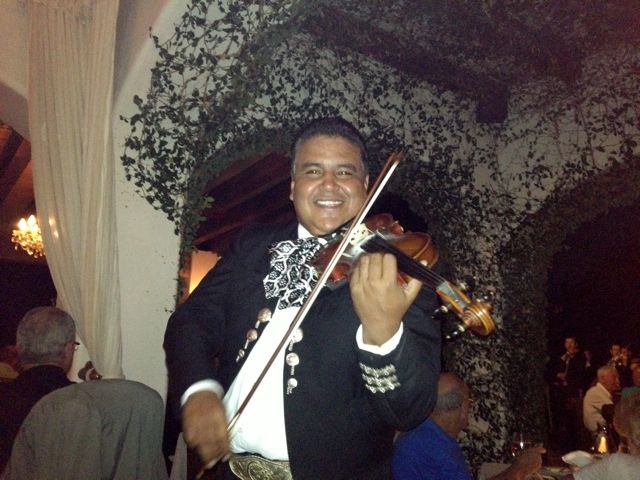 We had a delicious dinner in an exquisitely beautiful setting.  This may be the memory of PV that I will take home with me. 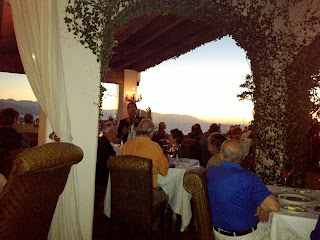 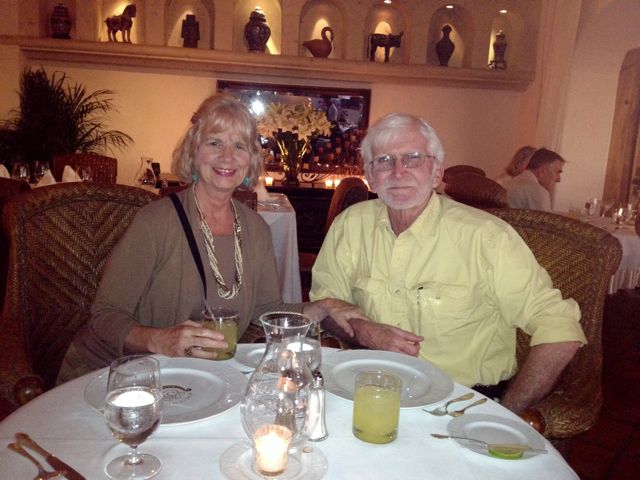 Posted by nanwebware at 7:03 AM