Year of the Rooster

The following was sent to Fred by one of his guests.  It's worth sharing.  It has made a believer of the Chinese Calendar out of me as well as provided me with a little peace of mind!!  "We should all get by without too much hardship!"

The Handbook of Chinese Horoscopes
by
Theodora Lau 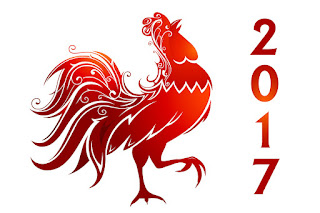 THE YEAR OF THE ROOSTER

The optimism the Monkey Year overlaps the year of the Rooster, but the Rooster tends to be overconfident and is prone to come up with nonsensical plans. While the colorful Roosters brings bright and happy days, he also dissipates energy. Better to stick to practical and well proven paths.  .

It may require a great deal of effort this year to keep from going off on wild goose chases. Refrain from making speculative ventures. Disappointments and conflicts will result. The Rooster likes to flaunt his authority and a lot of trouble can come from his domineering attitude. But since he also symbolizes the good administrator and conscientious overseer of justice in the barnyard, the peace will still be kept. Everything will be precariously balanced in the Rooster’s year, as his dramatic personality can set off all kinds of petty disputes.

This year we may have to expend maximum effort for minimum gain.  Try not to fuss too much. Details do need looking into, but don’t forget to view the whole picture. Be cautious.    Do not aim too high. One is liable to get shot down.

Politics will adhere to hard-lie policies.  The diplomatic scene will be dominated by philosophical orators who will rave a lot about nothing. Governments will be found flexing their muscles at each other, but just for show. There will be no real consequences. It is just that everyone will be too preoccupied with himself to hear or care what the other person is saying. The self-conscious influence the Rooster will cause us to take offense at the smallest slight. We will tend to be utterly ostentatious about the splendid image we think we project. Dissension and debates on all fronts will signify the Rooster’s penchant for argumentative exercises and will not be likely to do permanent damage to anyone when taken in the right context.

This will be a buoyant year in spite of the Rooster’s knack for making simple things complicated. One thing for sure: he seldom comes up empty-handed. This is the year of one very self-sufficient bird that will never go hungry.

Just keep your eyes open and your mouth shut and check facts and figures before making unprecedented moves. We should all get by without too much hardship.  Our pockets will not be empty although our nerves may be a bit frayed.
Posted by nanwebware at 4:27 AM