Time Flies When You're Having Fun

Not sure how the days pass so quickly.  I seem to be doing nothing, but I just can't find the time to fit everything in to one day!!

Our ranks are thinning just a bit for just a bit... One couple returned to Chicago yesterday and another left this morning so now we are six.  Yesterday at breakfast, I shared an email that I received from Haden regarding the Welcome Table story we had read by Alice Walker.  I'm not sure where Haden got his information and how he even knew about the Spiritual, but this was his comment:

I love your house rules and I'm envious of your discussions! Regarding this book, which I have not read, wasn't the idea behind the Welcome Table song, that the slaves used to sing, that they would someday sit at the table of their owners and, "tell god how you treat me!"? This could be why she went to the white church. She went to their table. But the true lesson of that song, I believe, is that there is only one table that matters, which all are welcome at, and that is god's. In his eyes there is no such thing as a "white table" not to mention a "white church" which is most likely why Jesus was not found in the church but rather outside where he Welcomes her.

It's humiliating that there are still a lot of people throughout the world who are singing that same sad song today.

Well knowing that the Welcome Table mean't the table of their owners made us look at the story in quite a different light.  Most of us had presumed that the Welcome Table was in heaven and we puzzled over why this old lady had even gone to the white church. It made us wonder how important it is to understand the context and how many other pieces of literature have we "mis-interpreted" because we didn't have enough information.

After breakfast we spent almost two hours looking at a DVD that Natalia, our cook, had given to Fred & Kat.  It was a professionally done video of their daughter Casandra's "Quinceañera ."   It was quite an elaborate affair.  I looked it up on Wikipedia and found that it was an Aztec tradition as far back as 500BC where both boys and girls at age 15 were considered to be the mother and father of future warriors.  It has different components in the various South American countries, but now is only a celebration for girls.  Casandra's video began with her at the beauty parlor getting made up.  Wikipedia said it used to be that this celebration would be the first time that a girl would have been permitted to wear make-up, but times have changed.

Casandra is a beautiful young woman and with the professional make-up and hair styled beautifully she looked quite amazing in her lavender strapless gown with a bejeweled bodice and large crinoline.  The first stop was the church where a "Thanksgiving Mass" was celebrated.  It was all in Spanish so I'm not sure what it was all about, but Casandra was clearly the center of attention.  After the service, everyone went to the party where there was a beautiful four-tiered cake, a DJ and a singer and food and drink.  Casandra danced with her father for "the first waltz".  In the past, this would have been the very first time that this 15 year old would have danced in public... but times have changed.  After the waltz with her father the show really began.  Casandra's older brother, Raul and another young gentleman did four more dances with Casandra.  These dances were very well choreographed and these young people must have practiced for a long time.  The first  two dances Casandra wore her beautiful lavender ball gown.  Then there was a break and she reappeared in shorts and a tank top with the boys in t-shirts that said, "We Rebel".  They did a modern jazzy type of dance. Then there was another costume change andCasandra came out looking like a Michael Jackson dancer with a hat and long thin pants.  Her escorts were in black and each had a black glove on one hand.  They did a fabulous dance to Michael Jackson's "Bad."

After that Casandra changed in to a darling short salmon colored dress and the video closed with her dancing with all of her friends on the dance floor.  It was quite a show!  The whole thing must have cost a fortune and I couldn't help wondering what these people do for the wedding!!

After our video, Loren and I set out to go to the Borda Gardens.  WE had heard that they had done a lot of renovating and we thought we would take a picnic lunch and have it in the gardens.  We walked to the Zocolo and went in to a new Starbucks- it could have been plopped down in San Francisco.  Nothing needed to be translated into Spanish:  grande latte, tall cafe mocha-  Starbucks is a universal language. 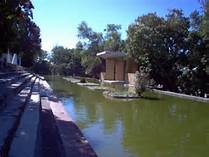 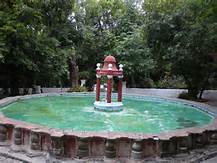 We picked up a ham sandwich and some iced tea and headed to Borda.  Sundays are free at Borda Gardens so there were many families there and crafts people selling their wares as well.  It had definitely been cleaned up and the several fountains were filled this time.  We had a nice lunch by a small lake.

We left and headed back towards the Zocolo.  I was thirsty so Loren suggested we try a little cafe we had seen.  We ordered two Cafe Frappucinos and this is what we got:

They were delicious and the bill came to about $5. 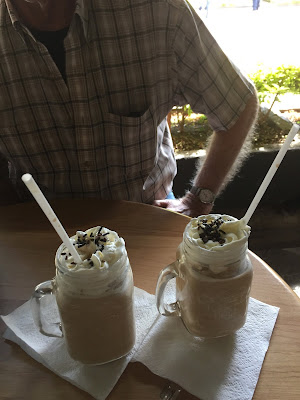 We had a very interesting discussion last night about the Palestinian/Israeli situation.  There were a myriad views presented which made us all agree that it is a complicated problem.  One posited that it was the United States with others who were responsible for establishing the State of Israel and we need to support it fully.

Another view was that the settlements weren't the problem as Israel had been willing to stop the settlements twice before and the Palestinians rejected the offer and continued bombing.  There would be no solution as long as the Arabs continued to affirm that Israel did not have a right to even exist.

Still another perspective pointed out how dominant Israel was and until they were willing to concede some of their dominance over the Palestinians there would be no room for compromise.

Although it was too bad that Trump said he would leave the idea of one state on the table, the meeting between Trump and Netanyahu seemed to go fairly well with Trump stating that he would agree to whatever the two sides came up with.  Not sure what all that means, but at least it left room for negotiations.  One of the guests said that the permanent settlements would never be able to be turned over, but that there could be some Israeli land that could be turned over to the Palestinians in exchange for those settlements - that seemed to be an intriguing offer.  By the end of the discussion many had tempered their original stance.  It's not a simple problem.

The next morning we all received a very interesting article called The Road to Peace by David Ross of The Washington Institute.  If you're interested in this complex issue, I recommend this article.  Basically he's saying if you think a two-state solution is dead, you need to pick up your shovel and think again as there are many Arab countries who might be willing to help in the peace process.  Check it out HERE.

It's now Tuesday morning and we lost another wonderful couple.  As they were leaving, Mac gave me a big hug and said, "Well, you have taught me that even far left Whackos like you can be nice!"  I was a bit taken aback- but I think Mac likes to take on the role of the kidder...

Another couple arrives this afternoon so I'm sure the interesting discussions will continue.  More later...

PS- Fred told me he had a correction for the Rules of the House:  #3 is:  If you ask a question, you must listen to the answer!!

Posted by nanwebware at 9:37 AM