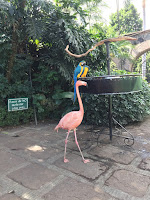 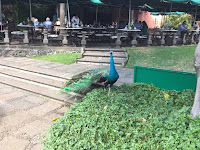 Friday is Natalia, our amazing cook's day off so we take Fred and Kat out for lunch and dinner.  Today we went to Las Mananitas for lunch.  It is a very special and beautiful hotel with gorgeous grounds and a lovely restaurant.  The unique thing about it is there are exotic birds that roam the grounds freely and add to the ambiance.    Mariachis come by the table singing things like Besame Mucho while we dine on delicious Mexican food. 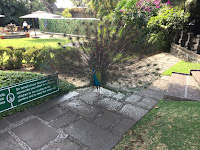 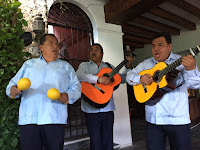 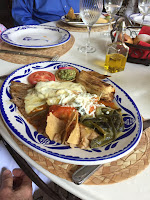 It is a great group and we are all having a wonderful time together, and the conversations are non-stop. 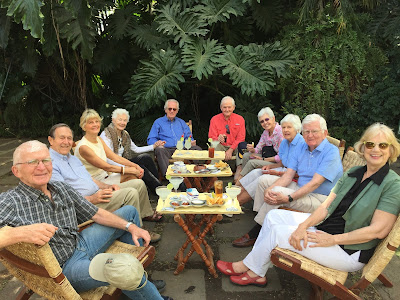 This morning there was a conversation about economics and bailouts that was a bit over my head, but when it was winding down, I was prompted to ask about regulations:  Should there be more or less?  The answer was "Better."  Then I asked about one of Trump's executive orders that, according to the media that I have accessed said that financial institutions no longer need to work in the best interest of their clients.

And a short education lesson began:  It is in the fabric of our legal system that any investment firm must have their clients' well being in mind and try to do what is best for their financial success.  But as a popular political move, something was enacted that would make it very easy to sue one's financial advisor when things didn't go as well as expected.  There have been cases where a client was advised that his holding was high risk and it would be wise to divest in some of it.  The advice was not taken, the client sued the firm and won.  Trumps' executive order just put things back to where they have been for decades.  After hearing this side of things, I get very discouraged.  When I read the headlines that were presented to me:  "Trump signs order giving Financial Institutions the power NOT to have the Best Interest of their Clients in Mind" I was outraged.  How could Trump do such a thing.

Fred Hickman was a very successful tax lawyer and was Under Secretary of the Treasurer under Nixon.  He is thoughtful and he knows his subject.  So I had to ask him what he thought about Trump not disclosing his tax statements.  Fred said he didn't think it was a good idea while he was being audited as it would throw it out there for hundreds of people to weigh in on their opinions.

I said it made me uneasy and that I couldn't help but think he had something to hide.  Isn't it important to know if he has holdings in Russia or China and how much he owes and to whom?  Fred replied that releasing his taxes wouldn't show us any of that information.  It would probably reveal that he didn't pay any taxes, but he's already confessed to that and said it was because he was a smart business man.  Demanding that he release his taxes is a political thing and not very important overall.

We also talked about Trumps' relationship with Putin.  I asked if wanting to be Putin's friend was a good idea.  Immediately someone said, "well, those are your words," and then went on to give me a historical perspective.  It was Bush who claimed he looked in to Putin's eyes and saw his soul - well that didn't lead to much.  Obama said he wanted to "re-set" relations with Russian - and that wasn't too successful.  There is also a story that during the Nixon administration, a newly appointed ambassador to Russia asked Kissinger, "What do I tell the Russians about Nixon?"  Kissinger told him to tell them he's smart, he's a strong leader, but sometimes he's a little crazy.  It was the unpredictability of Nixon's nature that kept the Russians at the table.  Now fast forward to Donald Trump... what is he trying to do with Putin?  No one really knows, and maybe that's a good thing!! 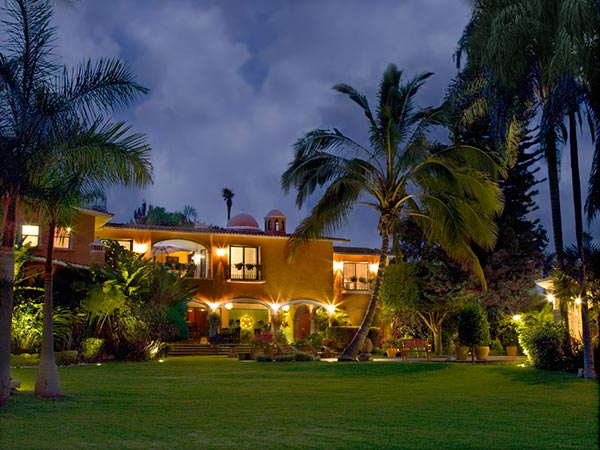 We ended our evening at Gustos, a fabulous restaurant just around the corner from where we're staying.  It is all lit up at night and a trio on the other side of the pool is playing lovely music.  The food is so Mexican and so elegantly presented.  I had a three chilies soup that was delicious- I wish I could get the recipe.  Everyone had amazing looking dishes and a few ordered figs flambé with artisan cheese ice cream for dessert.  It was prepared right at the table with fire and finesse.  WE had margaritas and wine and left a generous tip and it came o about $35.00 a person.  Quite a change from an evening out in San Francisco!   A grand ending to another great day!

Posted by nanwebware at 6:07 AM

From Florida to Mexico....with love....such interesting, thought-provoking discussions with thoughtful, intelligent people. The comment that we need to figure out why and pay attention to those who voted for Trump is one I've been thinking about. Also, how are our schools failing if so many people are so ignorant (such as not knowing basics like Obamacare=Afordable Care Act and readily believing 'alternate facts.')?

Please ask group if anyone has read 'Dark Money' by Jane Mayer. I will be interested in their comments. Recommend it to you - but NOT on vacation. Too upsetting (at least it was to naive me). It's about the influence of a few very wealthy families on our government (going way back) and especially on this past election. Just thinking about all this has my stomach in knots and I'm all churned up! Gotta go for a lovely walk on the beach and calm down!

How is your hip/back?

Love to you and Luke, and greetings and salutations to your thoughtful and inspiring friends. If they didn't vote for Hilary, who? ����