It's hard to believe that we have just about hit our mid-mark in our three week visit.  I don't ever take this place for granted, but time is flying by too quickly.

We had a delightful day today;  we went to the zoo!  I think it might have been about seven or eight years ago when Annie was last here in Cuernavaca with her younger sister and brother and we took everyone to the zoo and had a wonderful time.  I thought maybe Annie, at seventeen, might be too old or sophisticated for the zoo this time, but was delighted that she wanted to go back, especially to see the rabbits in the petting zoo!  I found the zoo much more lush and beautiful than the Borda Botanical Gardens.  There is a beautiful waterfall and a rapid stream that stretches the length of the barranca and we had a delightful walk down and back again. 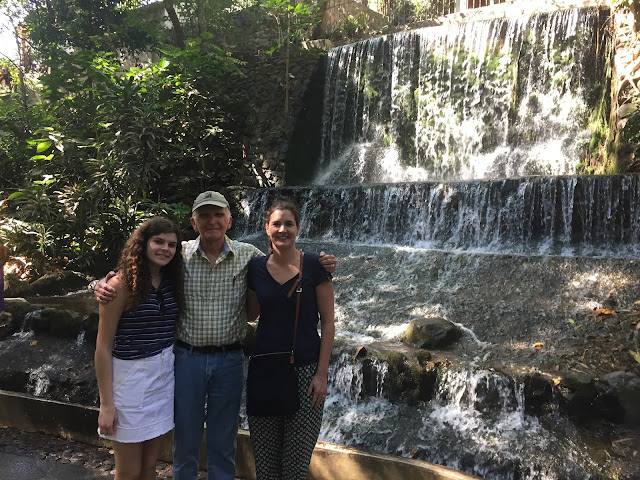 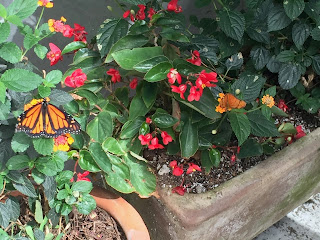 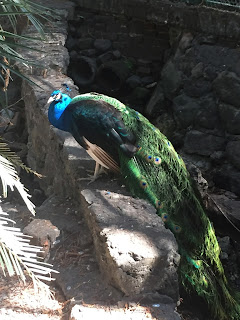 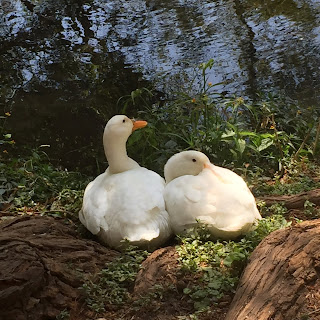 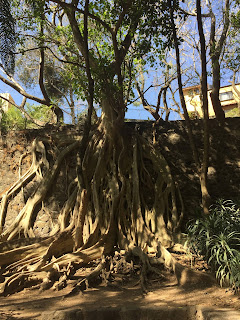 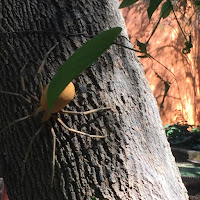 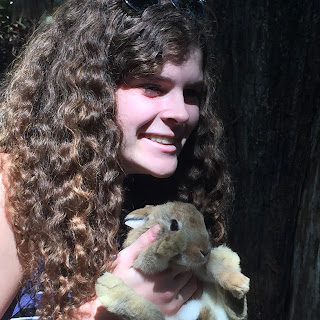 Annie is quite good in Spanish and was able to get us to and from the zoo, buy our tickets and translate the many signs we encountered.  The tickets were $.50 each for Annie and her mother and Loren and I were free because of our senior status!!


Reading is a favorite pastime down here and there is a wonderful exchange where book sharing is encouraged -although there were more books available in past years before the Kindle became popular.  I just finished reading Just Mercy by Brian Stevenson, who after graduating from Harvard Law School went down south -specifically to Alabama- to help victims on death row.  It is an amazing inside view into our justice system - wonderfully written, hard to take at times, but I highly recommend it.

Now I am reading The Undoing Project by Michael Lewis who also wrote Money Ball, The Big Short and The Blind Side.  It wanders quite a bit but is a fascinating look in to how human beings make decisions.  It tells of the lives of two rather incredible and unique Israeli psychologists who collaborate on a study together.  I just finished reading about how an algorithm can go horribly wrong if the sample being taken is too small.  So I asked our resident mathematician how was it that the pollsters like Nate Silver, could have gotten the election results so wrong.  She said that people asking the questions underestimated the anger in this country.  The polls had worked for many years reliably well.  This year it wasn't so much that the math or algorithm was wrong, they just weren't asking the right questions.  I found that quite interesting.  It was also thought that many people weren't giving honest answers to the questions.  Many people who voted for Trump didn't want to say so.

We had an interesting discussion about the use of drugs.  We all know lives that have been ruined by drugs or young people our children's ages who are struggling with addiction.  Very few of us remembered any drug use while we were in high school.  In my youth, drugs were something that people in the inner cities or gangs used.  We asked seventeen year old Annie who goes to a very well respected pubic high school in the Chicago area about the use of drugs in her school.  She said there was definitely marijuana but actually more of her friends drank than smoked.  She did tell us a very interesting thing that none of us had heard about:  Did you know that there is a nail polish that young college women wear that when dipped in to a glass of wine will turn a certain color if the wine has been spiked with something.  We all thought it is a sad world where something like this is necessary;  but it's also a great thing to have to be safe.  If only it were available for Bill Cosby's dates!!!

It's Friday and Natalia's day off so we'll be going out for lunch and dinner.  The consensus is that we will probably go back to Las Mananitas for lunch so Annie can see the birds and it's unanimous that we want to return to Gustos for dinner.

I didn't think I'd have anything to report as we went to the same wonderful restaurants today as we did las Friday... but I was wrong.  When we all had finished our delicious meal at Gutsos ( I had a pork dish from the Yucatan which was amazing) our waiter told us that since the Hickmans were such loyal customers, the dessert was on the house.  They proceeded to clear the table, taking everything off -even our water and wine glasses much to our protests!  They assured us that we would get everything back. 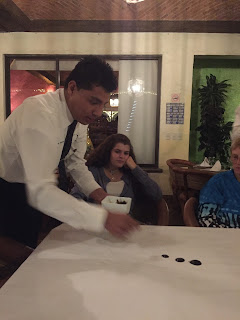 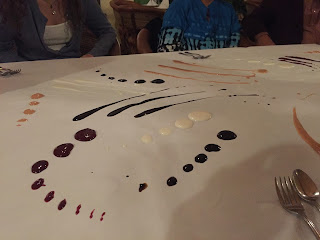 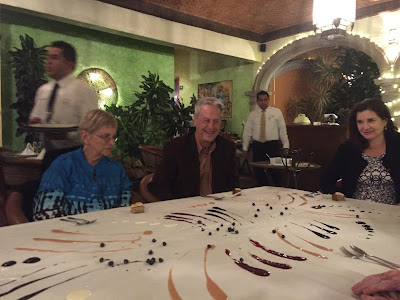 When the table had been cleared, two waiters came and put a white oilcloth on the table and then they began to dab and smear and paint with a variety of sauces:  chocolate, coconut, berry, fruit.  We were fascinated by the process. 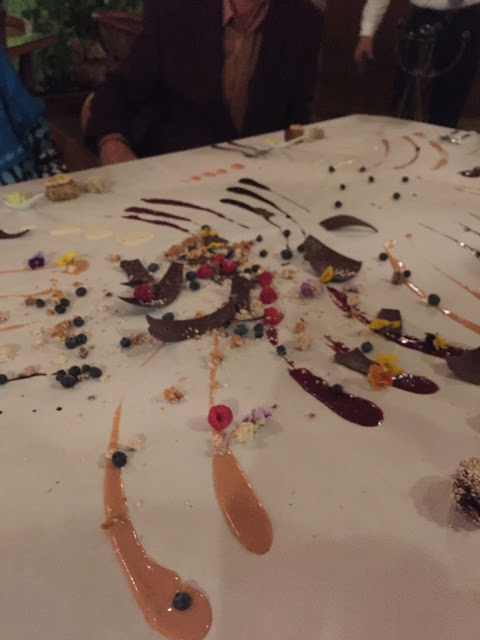 After the table was arrayed, they presented each of us with a spoonful of avocado mousse, a small sugared banana cake and a truffle.  BUT WAIT!  DON'T BEGIN YET!  The Head Waiter came out with what looked like a bowl.  He held it over the table and DROPPED IT!  Crash! it was made of chocolate and filled with berries and nuts.  It broke into pieces int he middle of the table!

Then we all began dipping our truffles and our banana cakes into the various sauces.  We used our spoons to scoop up some red sauce to put on our avocado mousse.  There was a bit of the feeling we all had in our youth when we were finger painting.  What struck me was the silence around the table.  No one was talking;  we were all so entranced by the experience.

And when it was over, we had had quite a time! 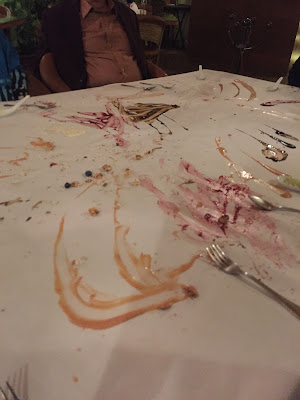 We asked if this dessert had a name and were told:  It's called The Jackson Pollock! 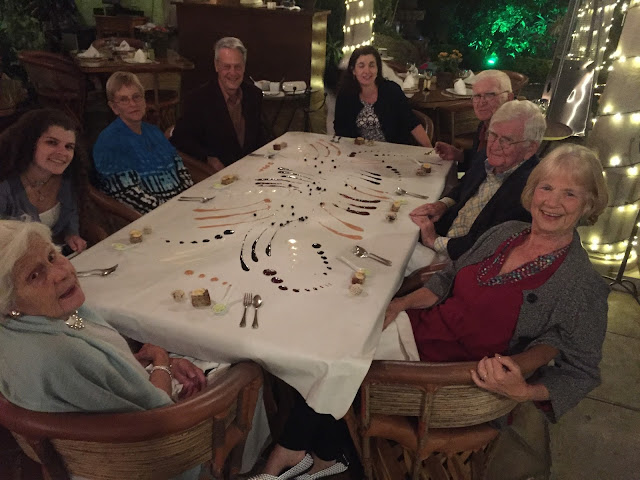 Another day in Paradise!

Posted by nanwebware at 4:59 AM