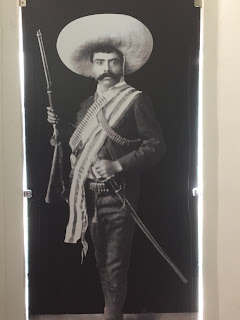 1810- Mexico declares independence from Spain, 1910- the Mexican revolution declares Mexico for the people, 2010- Mexico declares war against drugs which takes more lives that the eleven year revolution in 1910.  These are important years in Mexican history, but yesterday we took a Viaje de Zapata and learned quite a bit about the revolution of 1910.

It turns out that at this time Pancho Villa was the hero in Northern Mexico while Zapata was considered a bandit.  In the south- especially in the State of Morelos where we are staying, Zapata was the hero and Pancho was the bandit! 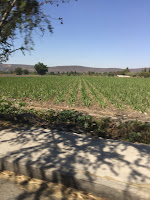 Our first stop was Emiliano Zapata's birthplace in Anenecuilco, a rural village that produced corn and sugar cane.

In 1876 Porfirio Diaz became president of Mexico, and although he ran local elections as a semblance of democracy, in reality he was running a dictatorship favoring the wealth land owners of the haciendas.  Zapata's parents were farmers, and the local people of Anenecuilco were active in trying to redress the seizure of their lands.  So Zapata was raised from a young boy in the art of rebellion.

His house was being "renovated" and a big fence had been erected in front of it.  But we were able to see it as a small modest place, especially when we discovered that Zapata was the ninth of ten children.  There was also an elaborate mural depicting the life and death of Zapata. 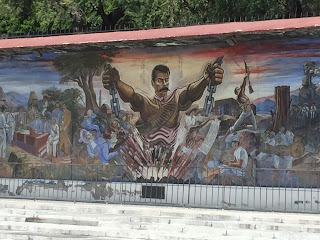 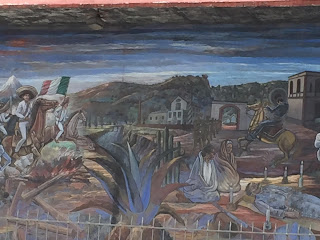 Our next stop was the the site where Zapata was killed:  The Hacienda de San Juan, in Chinameca.
Here we saw a big statue of Zapata on his horse on the exact site where he was gunned down.  Purportedly there are the original bullet holes in the walls surrounding this statue.  He is quoted as saying, "It is better to die on your feet than to live on your knees." 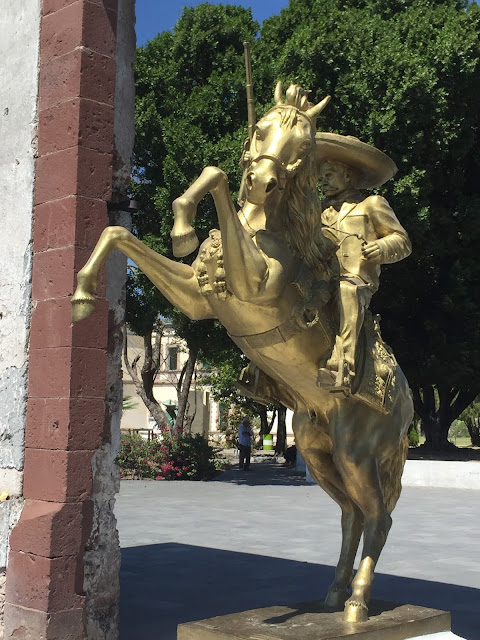 There was also a museum in the hacienda explaining the revolution.  It was all in Spanish, so we didn't get it all, but it was very clear that Zapata fought long and hard for the poor farmers and was very successful in getting much of the land out of the hands of the wealthy owners and back in to the hands of the farmers.  There is a statue showing Zapata signing the Ayala Plan which was the most radical reform plan of Mexico.  The Plan of Ayala called for all lands stolen under Díaz to be immediately returned; there was considerable land fraud under the old dictator, so a great deal of territory was involved. It also stated that large plantations owned by a single person or family should have one-third of their land nationalized and would then be required to give it to poor farmers. It also argued that if any large plantation owner resisted this action, they should have the other two-thirds confiscated as well.

After leaving Chinameca, we drove a fair distance to a rather large house in Tlaltizapan which was the headquarters for Zapata during the revolution.  Here we saw the desk where Zapata worked, some of his clothing and guns, and the bloodied pants he wore when he was gunned down.  Although the revolution happened more than 100 years ago, Zapata continues to have an influence, especially in Southern Mexico.  He fought for Reform, Freedom, Law and Justice - things the people are still fighting for.  He believed "If there was no justice for the people, let there be no peace for the government." 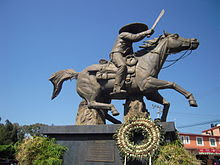 There is a sign in Morelos that says:  "You are in Zapatista territory in rebellion, here the people command and government obeys."

And the local Zocolo in Cuernavaca where we go everyday is called the Plaza de Armas and is dedicated to Emiliano Zapata, 1879-1919.

There is a very large statue of Zapata in Cuernavaca showing him with a machete rather than a military sword.

PS:  (Much of the information about Zapata I have taken from an article in Wikipedia.)


We ended our viaje at the Hacienda Vista Hermosa for lunch.  This was an amazing place- huge in scope and splendid in grandeur.  Ending our trip here was a bit ironic and I couldn't' helming but feel for the poor peasants and workers when I realized that this place was once inhabited by a wealthy landowner and his family.  The swimming pool says it all: 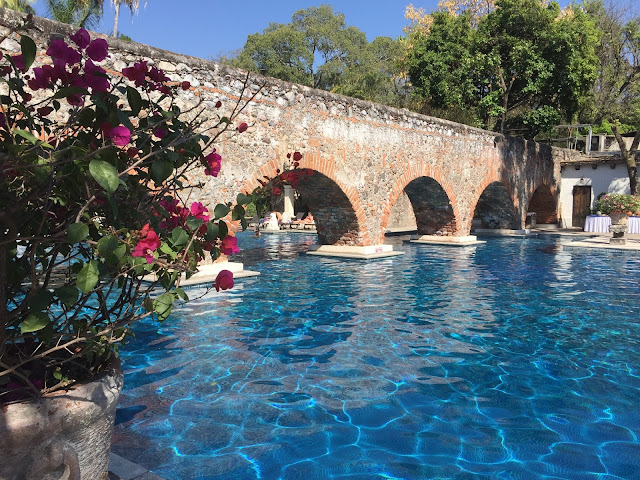 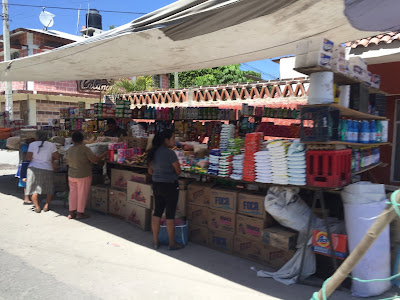 One of the most enjoyable parts of our trip was driving around the Mexican countryside through little towns and passed sugar cane fields.  It is so unlike the United States where one town melts in to another and all the McDonalds and Wendy's and Subways look the one another.  Since it was a Sunday, the village squares were crowded as well as the street markets which seemed to crop up along the road sporadically.

We asked our driver to let us off at the Zocolo because every Sunday at 5:00 there is a band who plays music in the bandstand.  I took a video of it, but don't know how to get a video in to my blog.  But the Zocolo was crowded with people.  The old ones sitting on benches enjoying a corn-on-the-cob with chili powder;  the young ones holding balloons and scurrying around on their skate boards.  In front of the post office there was a group of "elderly" people dancing to the music from a boom box.  They all seemed to have gotten dressed up for the occasion, and although we weren't sure about it all, Loren and I couldn't help but to join in for a dance or two.  They seemed to be receptive to our joining the group. 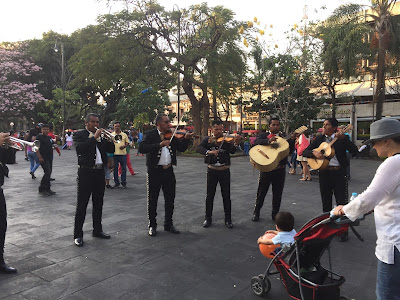 Walking to catch a cab home, we stopped to listen to a mariachi band play to an appreciative audience.  The Mexicans are a happy people who like their music, food and camaraderie.  It was a day full of history, and it was fun to be out and about in a world unlike our own.