Do you remember that old TV show called The Ding Dong School House?  What was that lady's name?  Well NanNan has taken over for her!
But let me back track...  The boys left for school early this morning as Timmy had a field trip and had to catch a bus leaving at 7:30.  I am writing this blog before going off for my morning latte at Starbucks.  Timmy asked me if I could order in Portuguese okay, and I said, " No Problemo!  Un Latte Tall por favor!"  Then I went to a Papeleria (stationery store) to get some chalk so we could draw on the huge blackboard that was down in the playroom.  That was kind of funny.  Clo had told me that the word for chalk is "Ghis" but I remembered it as "Geese"- so I asked for Geese and she didn't have a clue what I wanted.  Luckily a young man at the counter said he spoke a little English.  I tried to explain what I wanted, and with that translated information the salesperson showed me crayons!  With a little more trial and error, she showed me some chalk and I said, "Tutto Ben!"

The boys arrived home from school with great exuberance.    We had lunch prepared by Nisse, played a game of bingo to unwind, then got to the homework.  Timmy needed to translate the instructions for Nicky's work, but both boys were very diligent and worked hard on their assignments.

Then it was time to play, but before starting our Romper Room projects, I sat the boys down.  I told them that I adored each of them and they were fabulous boys.  But there were 3 things that they had to work on or NanNan wasn't going to last.  Tim needed to work on not getting angry and hitting;  Nicholas needed to work on not crying and whining;  Matthew needed to work on not yelling.  So I told them I was going to draw a button on their hands.  If they found themselves starting to fight, cry or yell, then I would say, "Hit the button" and that would be a reminder that they had to stop.  I set the timer to 99 minutes - the max amount - and said if there was no hitting, no crying or whining and no yelling by the time the timer went off, they would each get a present!  I'm not sure if this was a one-day thing, but those buttons were magic!!  Timmy was totally helpful and didn't show any anger the entire day (even after he got his present!!)  Nicholas started to whine and when I said, "Hit your button" he burst into laughter!  Matthew thought is was a great game and wanted more than one button drawn on him!!  I don't know if it will keep up, but we had such a great day together! 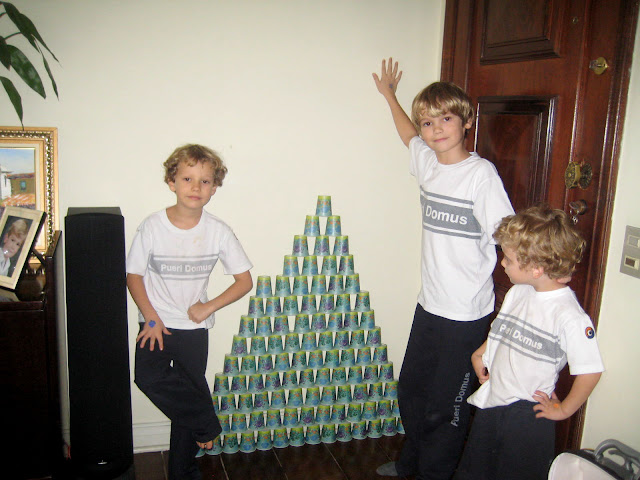 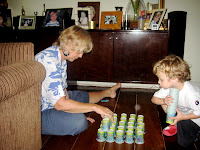 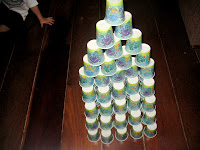 I had heard that there were some great building projects on YouTube that involved paper cups, so I brought a box of 100 down with me.  We watched a couple of You Tube videos, and then got to work.
This one box of 100 paper cups kept us all busy, happy and enthralled for almost two hours!  It was great.  We built the wall tower three different times so that each boy could have the fun of taking one cup away from the bottom and watch them tumble.

After that we were hungry and had a little snack before starting on our Oreo Cookie pie that we wanted to make for dessert!  It was yummy!

Showers, dinner, a little TV and then story time filled in the rest of the day.  Matthew fell asleep on the couch and Nicholas and Timmy were asleep by 8:30.

NanNan stayed up to talk to Clo a bit.  She is working two jobs - her old Microsoft job and her new one with an upstart company called Blinks which works with companies to help them get the most out of they cyber advertising.  She really likes it, but works late and long hours.  I don't know how she and Arthur can keep this house running and have any time for themselves... actually, I don't think they can!  So I plan to give them a couple of "date nights" while I'm here!

I was out cold by 9:30.  It was a very fun day and the boys were fabulous.  Let's hope the buttons work again tomorrow!
Posted by nanwebware at 5:25 PM