We arrived yesterday, and in some wonderful way it was as though we'd come "home." This is our 29th year coming to Cuernavaca as the guests of our most generous hosts, Fred and Kat Hickman. We were greeted by Fred and Kat as well as another couple down from Chicago, Edna and Larry.  The staff seemed genuinely happy to see us again and we were shown pictures of Natalia's new granddaughter, Camilla.  Natalia said that her son, Raul will bring Camilla to visit us sometime next week.  That will be wonderful, as 27 years ago when Natalia was on the housekeeping staff, she brought Raul as an infant, and I remember it well.  Since that time, Natalia has learned to cook by apprenticing herself to the various cooks we had, and she now, for the past five or six years, has been our chef extraordinaire.

Since I've been doing these blogs in Mexico for quite a while, I hope to concentrate on our discussions this year rather than the food, bouganvilla, or sites.  But lest you have forgotten or not yet seen our villa, I do want you to be able to picture where these stimulating discussions are taking place:


I think of my time here as my Mexican Chautauqua;  the discussions are always interesting and always varied, and I am in constant learning mode.  As many of you know, there is often a preponderance of Republicans at the table.  Fred as the host and leader of the discussions is extremely well-read and counters my rash, often emotional opinions with well thought out, moderate opinions that often make a lot of sense.  I might also add that one of Fred's "Rules of the House" is that there can only be ONE conversation going on at a time.  This squashes any side-conversation that can be distracting and keeps us all listening to each other which makes for much better sharing and comprehension.

So the first discussion I want to share with you is regarding the explosive mess that Governor Northam of Virginia finds himself in.

Here's a guy that just a week ago discovers there is this appalling picture on his Medical School Yearbook page of a man in blackface standing next to a man dressed as a clansman.  On Friday, the governor confirmed he was one of the people pictured and issued an apology, calling the costumes "clearly racist and offensive." But on Saturday, he called a news conference to say he does not believe he is either person in the photograph. 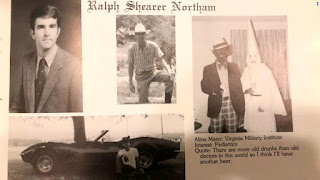 Now to me, this seemed ludicrous.  How could one day you say you were in that picture and the next day say, "Oh, no, now that I think of it, that's not me!!!"  It's beyond my reasoning powers to think someone could change one's mind.  If someone had shown me a similar picture and asked if I might possibly be that person I would say, IMPOSSIBLE!  So I asked the question to our group at margarita time:  Do you think there's a chance that he's telling the truth when he says one day he is in the picture and the next day he denies he's in the picture?"  All the men thought it was possible.  He was probably very upset and shocked at first, but then later realized it wasn't him.  The women were not so quick to give him the benefit of the doubt.  I also wonder if we give him the benefit of the doubt that he is not in the picture, why is the picture on HIS yearbook page? 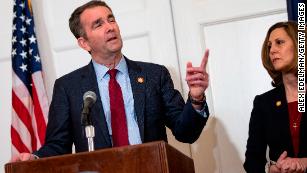 Fred, who is an avid reader told us about an article from the Chicago Tribune, written by Dahleen Galton, an African American woman journalist who thinks this whole incident has been politicized.  In her article, she points out that this happened 35 years ago in the State of Virginia - a state with a renowned racist history.  Richmond was the capital of the Confederacy.  She says, "Is it really so shocking that someone who grew up on a farm in a county with such strong ties to slavery might have put black shoe polish on his face at one time or another?"

Northam also admitted to wearing blackface for a dance contest where he was doing the moonwalk ala Michael Jackson.  Galton reports, "Northam says he didn’t realize the harm he’d done by dancing in blackface until he had a conversation about it later with a person of color.  “He let me know why this was offensive,” Northam said at a news conference Saturday. “I apologized to him, and I will never do it again.”

She then goes on to enumerate the reasons most African Americans voted for him:  He agreed with them that Confederate monuments have no right in public spaces. Since taking office, he has worked to expand Medicaid to serve the poor. He has helped restore voting rights to felons, politically empowering more black men.

I read the article and urge you to do so as well.  (Click HERE.)  After reading this article I was instantly taken back twenty-five years ago to the San Francisco Day School where I was the Upper School Head.  I don't remember the exact conversation, but we had just come back from Spring break and we were talking about how tan someone was.  I said, "I don't have the kind of skin that tans;  I turn more like Oriental yellow."  Later that afternoon, the PE teacher, Marcus Chang, came into my office and said, "Nancy, can we talk?"

"Sure, Marcus, come on in."  Marcus told me that what I had said about "Oriental yellow" was very offensive to him as a Chinese man.  I was taken aback.  Marcus told me we can have Oriental food, and Oriental rugs but NOT Oriental people.  I had referred to Asians as Orientals all my life, never knowing it was an offensive term.  I apologized profusely, saying I really never meant to offend him.  After my conversation with Marcus, I have NEVER used the term to refer to people again.  Some say our society has gone too far;  we're too sensitive and it's like walking on eggshells to navigate the cultural/racial/ethnic maze of what's offensive and what's acceptable.  The word Oriental is not charged for me, but when I learned that it offended a co-worker, I dropped it from my vocabulary and easily adopted the term Asian.

I think learning and becoming more sensitive to the feelings of others is a good thing.  Just in writing this, I am disquieted that I used the term "yellow" to refer to an Asian's skin color.  As a child, I was taught there were four skin colors:  white, black, yellow and red.  I Googled "How many skin colors are there" and the first thing that popped up was, "There are no people who actually have true black, white, red, or yellow skin. These are commonly used color terms that do not reflect biological reality. Skin color is due primarily to the presence of a pigment called melanin, which is controlled by at least 6 genes."  So maybe they are still commonly used terms.  But if an Asian or Native American told me he or she were offended if I referred to their skin color as yellow or red, I wouldn't do it.
I'm not sure where the Northram debacle will end up - especially now that the African American Lt. Governor has been accused of sexual assault.  Are these good men who have been politicized?  Or if they are guilty, should they be taken at their word that they have learned from past ignorances and indiscretions and are ready to serve all members of their constituencies with honor?  Or should we stand on our principles and oust them from public office knowing that a man or woman never really changes his or her core beliefs or ethics?

This is a perfect example of why I love coming to Cuernavaca.  My positions are constantly being challenged, and I am forced to view things from different perspectives.  I would look forward to your comments about this - especially about the article in the Chicago Tribune.  I'm still not sure how I feel about this particular situation, but our discussion and the viewpoint from an African American journalist have caused me to reconsider.

SO glad to hear from you, Nancy! It's a misty Thursday night here in CT, seeming not too cold, actually, after last week's polar vortex! We were supposed to go to the Joni Mitchell birthday concert (showing at theaters nationally tonight only) but Michael is sick, so we've had to pass. Thus, I've had time to read your always thought-provoking blog. While I haven't yet mulled it over thoughtfully, my first response is to your anecdote about referring to Chinese people as 'oriental' and 'yellow.' In my high school the term 'fairy' was used to refer to gay guys. I actually wasn't sure what being 'gay' meant at the time, but the description certainly was one of scorn and derision. So yes, I do think most of us have done or said really hurtful things in our past because we were clueless. Have we as a nation become more sensitive to language, depictions and treatment of others? Thankfully, yes (although clearly we have far to go). I'm not sure, however, what I think about the sexual abuse issue as it applies to teenagers and young adults...a la Kavanaugh. That seems tougher to parse, somehow. Wow! This is stimulating....keep on blogging!

I do so enjoy those conversations and love that you share them with us. I personally think that all these politically correct issues have gotten out of hand. People make mistakes, it happens, through conversation we are enlightened, apologize, correct our behavior and move on. The problem is when we have someone in an elected position that represents the people. In this case, this person should have a moral and ethical record that is unquestionable to govern and represent all fairly. It is a hard judgment call to make, what was "ok" 30 years ago may not be "ok" today, should the person be judged for the choices he made when it was "ok"? If the standard has been set then it should be applied to all, including he who was elected and not judged for saying "grab them by the pussy". The double standards kill me.

I Never Comment on Politics! But here I go.
This whole black face issue is out of control. Back in the 40s and 50s minstrel shows and comedy skits were very popular done in black face. I remember seeing it on tv right after the Amos and Andy show. I’m sure Ed Sullivan had a skit with black face. It was a very particular kind of entertainment. That was then and this is now. I’m going to a Halloween party and I am dressing to look like my favorite singer Diana Ross. I have a huge Afro wig, a beautiful sequined dress, red lipstick, 6 inch heels, and I am putting on dark makeup all over my face. I’m going to look awesome! Any problem? Will I get fired from my job? Will I be on CNN? No. What I’m doing is not offensive. If Idescribed my costume exactly the same except instead of saying makeup I said black face I be called a racist, kicked out of the PTA, and have eggs thrown at my house. I never gave black face much thought. If black people don’t like it then I won’t use it. But politicitions who use that term when they are talking about dressing up to look like a famous person are shooting themselves in the foot. When is someone going to stand up and say blackface and dark makeup are two different things. Next Halloween I’m going as Mariah Carey. She is black but I won’t need any makeup or you know what face! JW