Keep your voices down!


We were having a fun discussion about dogs last night at margarita time because the Ridder family have their name in for an unborn labradoodle that they hope will be a companion to their ten year old Golden Retriever, Waffles.  It was 14 year old Ben who raised his hand and suggested we talk about Trump delaying a National Emergency.  Earlier in the day, his grandfather had emailed all of us two articles - one from The Wall Street Journal and the other from The New York Times.

both parties don’t mind stretching constitutional limits to achieve their policy goals. Democrats cheered on Barack Obama’s legal abuses on immigration and so much more, and now many Republicans are cheering President Trump’s declaration of a border emergency to build his wall.  Constitutional conservatives should be wary of both.

Reading that opening paragraph I found myself saying, "What legal abuses on immigration did Obama declare?"  I have such high regard for Obama that it is hard for me to conceive of him abusing his power.  Yet, being here for two weeks has forced me to consider that it's not about one side being right and the other side being wrong.  It's also not just about the polarization of the two sides.  Fred reminded us that he was born in 1928 and the inability for Congress to compromise is not new.  The article points out that Harry Truman called a state of emergency and tried to nationalize the steel industry.  It was shot down in court where it was said that "presidential power depends on its relationship to Congressional power and intent."  It seems clear that Trump's declaration of a national emergency is not what Congress intends - especially since Congress passed the budget giving $1.8 billion for "the wall."

Okay- so I'm a bit frustrated.  I was even told to keep my voice down in our discussion last night!  (I was so surprised as I was totally unaware that I was raising my voice.)  But didn't our founding fathers create a system of checks and balances for a reason?  The three branches of government need each other to create "a  more perfect Union."  Apparently in 1976 Congress passed the National Emergencies Act giving the president the power to declare a national emergency.  To me, the number of guns and the violence in this country is a far greater national emergency, not to mention Global warming which threatens our very existence as a planet.  If one of our Democratic candidates reaches the White House, could they, too, override the wishes of Congress, declare a National Emergency and ban guns and plastic?  Why not!

And someone last night implied that the Democrats wanted open borders.  I think that may have been where I raised my voice!  No one wants open borders- we know that isn't possible.  But our immigration system is totally broken.  We were talking to a taxi driver whose daughter lives in Houston with her Puerto Rican husband.  They own a hazmat and mold cleaning service that was very successful and growing.  They refuse to hire illegals- which was never a problem before.  Now his daughter is calling him and saying, "Dad, please come help us.  We can't find workers to keep our business going!"  So would it be possible to hire Mexicans who could legally cross the border to work in Houston?

Gavin Newsom, our new Governor of California, has called the wall Trump's vanity project.  It seems so clear to me that this whole deal is just a political stunt.  At one point Trump was offered much more money than he got on Friday in exchange for legalizing the Dreamers - something the Democrats really wanted.  But in the most recent deal there is no mention of Dreamers and Trump got little money to fund his folly.  So who won?  Even Mitch McConnell who said he was against Trump declaring an emergency is on board with it because it was the only way he could avoid another government shutdown.  When I asked if it would ever be possible for these politicians to do the right thing, Fred noted that their first priority is to get re-elected - not to pass sane, ethical policies.  It's pretty depressing...

Talk about depressing...   it seems one day everyone is riled up about something and then we're on to the next fiery topic.  What happened to the black face issue?  That seemed to me to be a HUGE thing and now I can't find anything in the headlines about it- Have we decided to just ignore it and maybe it will go away?  Fred did send me a follow-up piece written by the African-American woman journalist, Dahleen Glanton.  She says, "Are we going to allow a few politicians and celebrities who made the horrible mistake of wearing blackface to a party force us to set an agenda that appeases everyone in the short

term but does nothing to further our important causes in the long term? Can we afford to start digging deep into every white person’s past to try to figure out whether they might have put shoe polish or dark makeup on their faces at one time or another in the past because they thought it was funny or cute? That’s a never-ending task with little or no payoff. Is this how we are going to try and purge our political system of racism? If so, it’s a huge  mistake.

I took issue with some of the article, but I liked the way she ended it:   "The way I see it, there is only one way out of this mess. As of today, black people have to forgive every white person who has ever worn blackface.  But if anyone does it tomorrow, we’re coming after you.

In reading her article, I found myself thinking that she was being too easy on us White Folk.  I think it's letting us off too easy to say we really didn't know it would be offensive.  Why, for example, is Governor Northam standing next to a guy dressed like a Clansman?  Was it because he didn't realize the Klu Klux Klan was an offensive, racist, violent organization? 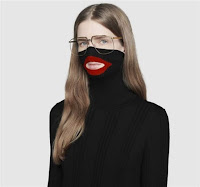 In looking for a follow-up to the Virginia Black-face issue I did find a head line about the Italian fashion house Gucci.  After an uproar over an $890.00 sweater that resembled blackface, Gucci announced a major push Friday to step up diversity hiring as part of a long-term plan to build cultural awareness at the luxury fashion company.

Gucci also said it will hire a global director for diversity and inclusion, a newly created role that will be based in New York, plus five new designers from around the world for its Rome office.  It also will launch multi-cultural scholarship programs in 10 cities around the world with the goal of building a "more diverse and inclusive workplace on an ongoing basis."

Now I ask you to take a look at this sweater - this $890.00 sweater...  Can it be possible that the Gucci designers that released this sweater were so naive as to not see any resemblance to blackface?  Would you, (if you could) buy this sweater and walk down Market Street with a casual air showing off your new Gucci purchase?  I don't think so.

But it was also pointed out that some believe the Annenberg poll was deeply flawed. 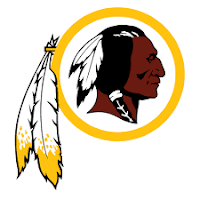 This all happened quite a few years ago but it seems to keep cropping up.   In a headline of the Washington Post as recently as 2016 it says:  New poll finds 9 in 10 Native Americans aren’t offended by Redskins name.  As far as I know the Washington Redskins are still sporting their Native American logo and playing ball.

I do agree that political correctness can go too far and that there is an over-sensitizing of many things.  But I also see a big difference between the Redskins issue and that of blackface.  If the Washington Post is correct and 9 in 10 Native Americans aren't offended by the Redskin's name, I would be will to bet if you did a poll of African-Americans, blackface would be offensive close to 100%!

Well, I'm off to the pool to cool down!  I'm not feeling too generous towards politicians these days;  nor am I feeling too optimistic about the state of the nation.  Let's hope more discussions will change that!
Posted by nanwebware at 12:13 PM

It is so interesting to read your blogs. It sounds like you are all having a lot of discussions of a lot of interesting and potentially controversial topics.

I listen to a Podcast that is co-hosted by Mark Geragos - an attorney with some famous clients, most recently Colin Kaepernick - also Scott Peterson and Michael Jackson to name a few.

There are a few things that I really like, when I listen to him -

First: He is incredibly smart when it comes to the law. And because of that he is very good at predicting what will happen next in the world of President Trump. He is wonderful at explaining the courts, special prosecutors, the federal court system, Attorney General, etc..

He also explained many of the things that President Obama did in his terms as president. It wasn't all butterflies and rainbows - he did what he had to do to get his policies implemented.

Second: He and his cohost Adam Corolla are not afraid to broach a subject. They talk about the "old days" and what was acceptable. Those same actions today, would land them in jail and accused of all kinds of things.

I feel strongly about that. I believe that much of what you are is based on what you learned from your parents and environment when you were growing up. If you grew up in the south 50 years ago, then yes, your parents were probably bigots by today's standards. 50 years ago, that was just how most people were. Generations change that, but it takes time.

I also believe that things can taken too far, and be such a hot topic that you can not possibly say anything against it. I believe that the #metoo movement became one of those topics. If you disagreed with any accusation that anyone made, you were vilified. Some of that turned into a witch hunt...

But now comes my own struggle. When I hear about someone making accusations against someone from 30-40 years ago, that makes me angry. I am not taking about rape accusations, but some level of what can be considered sexual assault. Is it fair that someone brings up a "breast grab" or something of that nature 30 years later?

My first reaction is absolutely NO.

But then I realize that sometimes it takes that first person to bring it up, to make the second person feel brave enough to come forward. And suddenly you have a line of people brings you to assaults that have happened recently.

Harvey Weinstein is probably a good example of that. Bill Cosby is another.

There are just so many sides and ways to look at a story. It seems that currently Democrat or Republican seems to be the only two options for a lot of people.

Thanks for your very insightful comment, Doug. I think you are right, it is all a process. Historical insensitivities are spotlighted and we learn and move on. I remember when some people rolled their eyes when I started using Ms. instead of Mrs. That small change was important to me and many women - a small step- not earthshaking, but it made a statement. Some changes are incremental; others cataclysmic. The goal is to keep moving forward.