A Vocabulary Lesson and more...

I am a lover of the English language, so I feel compelled to share something I learned today.  I was reading an article about Trump's rally in El Paso, where he alledged that the El Paso fired department had allowed 10,000 people to come to the rally.  The Fire Department denied this and said that the arean where the rally took place had a capacity of 6,000 and they did now allow the crowd to exceed that.  Trump went on to say that a counter-rally, led by Beto O'Rourke, was attended by a mere 200-300 people, thus ending any presidential hopes for Beto.  Once again this "fake news" was corrected by the facts that there were at least 5,000 people at the O'Rourke rally.  This is part of the article from The Huffington Post: 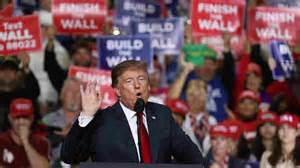 Trump addressed their protest at the rally and bloviated about the number of people in attendance yet again:
“A young man who’s got very little going for himself, except he’s got a great first name… He challenged us. So we have let’s, say, 35,000 people tonight. And he has 200 people, 300 people. Not too good,” said Trump, who then said of O’Rourke:  “In fact, what I’d do, what I would say is that may be the end of his presidential bid.”
Well I was struck by the word bloviated- which I had never heard of before, so I looked it up.

I like that word and think it sounds like its meaning.  So then, just minutes later, I am reading an article about gun control and a bill that is on the floor that is trying to deal with background checks.  Part of the article says:   Florida congressman Matt Gaetz and his A+ rating from the NRA, however, bravely stuck it out. In the span of about eight minutes, he gave a masterclass on how his GOP colleagues are sure to bloviate, distract, obfuscate, and otherwise waste time during an iteration of Congress in which they will no longer be able to ignore gun violence altogether.

What are the chances of meeting that word, bloviate, twice in a matter of minutes - a word I had never heard before!  It turns out that Fred Hickman says its a word he's heard of but it's not often used.  Most of the others at the table had never heard of it.

Then Don asks, "What about kakistocracy?"  No one had heard of that word, but it is not made up-  The dictionary definition of kakistocracy is government by the least suitable or competent citizens of a state.

So we concluded that The US is a kakistocracy run by a president who has a tendency to bloviate!
Bring that up at your next cocktail party and see what happens!!

On another note, I just finished reading Michell Obama's autobiography, Becoming.   I LOVED it!  - especially the first part about her childhood growing up on the South side of Chicago.  If you ever doubted the importance of family and parenting in raising children, just look at how Fraser and Marion Robinson raised their two children.  Even Kat, who is not a big Obama fan, told me she really liked the book.  I have always been a big fan of Michelle's, but after reading the book I am even more so.  What a classy, thoughtful and amazing woman she is.

One of the wonderful things about being here in Cuernavaca is that I can do anything I choose to do - there is essentially nothing I HAVE to do- except show up for meals and margaritas.  There is no planning of meals, no buying of groceries, no appointments to meet, no meetings to attend, no MUNI to catch, no car to park, no responsibilities to fulfill... NOTHING!  As a result, reading becomes an integral part of my day.  Kat always has books readily available, and guests are always adding to the pile on the long side table in the living room.

So yesterday afternoon I finished Becoming and last night I started Educated by Tara Westover.  This book had been recommended to me by several people.  I have only just begun reading it, but it's a swerve in the road as I go from Michelle in the Southside of Chicago to Tara in the mountains of Idaho - not to mention the difference in parenting that the two women received!!  It was a truly remarkable journey taken by Michelle;  I have no idea where Tara is going to end up at the end of the book.

Tomorrow is Valentine's Day which has always been a fun day around here.  The staff decorates the house with hearts and balloons and Natalia always outdoes herself at dinner with red roses, specially folded napkins, and a special dinner.  Stay tuned!

Posted by nanwebware at 3:00 PM


I guess you and the other Cuernavacan guests never watched Bill O’Reilly on Fox. “Bloviate” was one of his favorite words and he proudly used it even to describe himself. News today from McCabe is stunning. Wish I could read the history books in 50 years! cdt

What you just experienced was the Baader-Meinhof phenomenon, which may be another word you haven't run across. - Glad you are having a good time. Keep up the posts - Michael

For those of you reading this and wondering what the Baader-Meinhof phenomenon is, I looked it up for you:

Welcome to the Baader-Meinhof phenomenon, otherwise known as frequency illusion or recency illusion. This phenomenon occurs when the thing you've just noticed, experienced or been told about suddenly crops up constantly. It gives you the feeling that out of nowhere, pretty much everyone and their cousin are talking about the subject -- or that it is swiftly surrounding you. And you're not crazy; you are totally seeing it more. But the thing is, of course, that's because you're noticing it more.

Now if you've done a cursory search for Baader-Meinhof, you might be a little confused, because the phenomenon isn't named for the linguist that researched it, or anything sensible like that. Instead, it's named for a militant West German terrorist group, active in the 1970s. The St. Paul Minnesota Pioneer Press online commenting board was the unlikely source of the name. In 1994, a commenter dubbed the frequency illusion "the Baader-Meinhof phenomenon" after randomly hearing two references to Baader-Meinhof within 24 hours. The phenomenon has nothing to do with the gang, in other words. But don't be surprised if the name starts popping up everywhere you turn .

Who says we're too old to learn new tricks!!