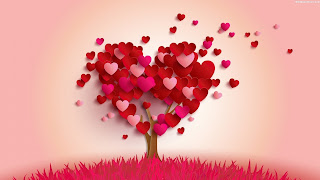 We had a lovely day yesterday.  In Mexico, February 14th is called the Day of Love and Friendship which I think is a nice affirmation.

Kat wanted to get a pedicure and I thought a manicure would be nice, so the two of us made an appointment at a "spa" down the street.  We went after lunch and it was a delightful afternoon.  We were met by a mother, daughter team:  Sylvia and Edith.  Edith, the mother, was the masseuse while Sylvia, the daughter, did the manis and pedis   Since we were only there for our pedicure and manicure, Kat went first.  Sylvia knew limited English but with our limited Spanish we discovered that she had gone to school in Montreal and had learned French.  I had told her that my three grandsons had lived in Brasil and knew how to speak Portuguese which I had thought was very similar to Spanish.  "No, No," she said.  She had Brasilian friends and she could communicate with them better using her French than her Spanish as French was closer to Portuguese than Spanish was!  I found that very interesting.

Edith spoke and understood English better than her daughter, so we asked her about the new Mexican president, Obrador.  They both shook their heads and said the problems in Mexico were too great for Obrador to have any effect on them in the 6 years he had in office.

"And what about Donald Trump," I asked?  They both laughed and then said they thought he was more of a businessman than a politician.  He could operate companies but didn't know how to run a country.

Kat's ankles were somewhat swollen- probably because the altitude is so high here, but it seemed to concern Sylvia.  She was able to convey to us that they had a lotion that they could spray on that would take the swelling away and renew the blood flow.  It was very good.  I asked how much it costs and was told it was about $13.00. I began to be interested because I thought maybe it would be good for my psoriasis as well. "Que es el nombre?  And can I buy it at a pharmacy?"  No, no.  We have it here.  So Edith opened up a chest at the back of the room and brought out a wine bottle half-filled with this liquid.  It was an oil-based liquid steeped with rosemary and camphor.  Edith brought the bottle up to our noses and it smelled horribly.  Then she put a little on my hand and it was very greasy and oily.

"When do you put this on?"  At night, just before going to sleep, she replied.  What about the sheets, I asked, fearing that it would stain the sheets and cause a big problem for Lucy and Rosa who had to wash everything at our villa.  "No Problema," she said.  Well, I wasn't convinced and I told Edith that Kat could not use this because her husband would not like her getting into bed at night with the smell of camphor.  So we politely said, "Muchas Gracias, pero No!"  We got a big chuckle out of this.

We left an hour and a half later, Kat with a nice pedicure and me with newly polished pink nails.

At breakfast, I had posed the idea that we all write a six-word love story.  I had heard about this many years ago from my son, Arthur, and had saved the idea.  Some examples from a web site that I shared were:


So I passed out pieces of paper and suggested that we share our 6-word love story's at margarita time.  We placed them all in a bowl and each one took one to read aloud and we tried to guess who had written it.  These were some of our stories:
It was a fun exchange, and I was impressed with the creativity and poetic nature of the group.  I also learned something:  it was Fred who wrote, "Very slow wakening but still woke."  We all guessed it was Fred's because he had the reputation for being one of the most eligible bachelors in Chicago, taking his time to pick the right one - thus "very slow wakening."  Fred, however, asked all of us if we got the double entendre of "But still woke"- and NONE of us did.  Fred, the oldest member of the group, had to clue us all in on the new term, "He's WOKE" which we learned means he's with it- he understands, he gets it.  We weren't quite sure what to call someone who was clueless:  would he be Not-woke or perhaps Un-woke? 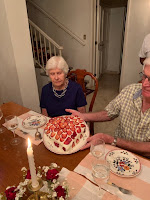 Natalia outdid herself once again for our Valentine's dinner.  We had a delicious chicken in a sauce with broccoli and carrots and then a magnificent heart-shaped cake with strawberries for dessert.

As for any news, we really don't get much.  There are headlines about McCabe and rumblings about Besos and the Long Island deal, and snippets about Congress finally passing the budget with Trump ready to sign it into law and then declare an emergency so he can get an additional $8 billion, but none of it has any substance- so our conversation sort of side skirts it all.  I think I may try to get more information about Amazon breaking the NY deal - Is that good for New York or not?

One thing I love about our 5-week stay here in Cuernavaca is that each week people come and people go.  Edna and Larry left this morning and Kat and Fred's youngest daughter, Sara, arrived with her husband and two of their three children.  Emily is a senior in high school on her way to Tulane next year and Ben is a freshman in high school.  So we're going to up the energy level here by leaps and bounds over the next few days.  I'm looking forward to it.