All the Print that's Fit for News

We had a very interesting discussion last night centered around the fate of newspapers.  Par Ridder, Fred & Kat's son-in-law, has grown up around the publishing business that has been in the family since his great grandfather started a German speaking newspaper in NYC.  Par cringed when someone said something to the effect, "Well, newspapers today don't have the money to hire investigative reporters, so how can we expect really good reporting anymore?"

Par presently works for the Chicago Tribune and seems well aware of the shifting trends in the news media.  Recently his company divided up their assets into two categories:  those that are profitable and those that are not.  In the first category were digital news, real estate and television.  In the second category were print.

I was inspired when I saw the movie Spotlight.  How exciting it must have been to be working for the Boston Globe on that story- to be given the time and the money to ferret out such an explosive story.  And back in the day, when something was published in a reputable newspaper, we, the audience, all assumed it was the truth - maybe slanted, but nonetheless substantiated truth.

Par was discernibly torn.  It was apparent that he understood that print newspapers were hanging on by a very fragile thread, yet I could also sense that he was willing to fight to the end to preserve this media.  He hates reading a newspaper on-line and cherishes his time "smelling the ink" while sipping his morning coffee.  He did say that there were two papers who are trying to keep the old model of healthy staffing.

One is the Washington Post that was bought by billionaire Jeff Besos;  the other is the L.A.Times  recently bought by a billionaire
from China.

Does that mean that in order to have a worthy news source it has to be subsidized by billionaires?

Another thing Par mentioned was how, in his suburbia neighborhood of Winnetka, Illinois, he is the only one getting the paper delivered to his door each morning.  He looks around at the neighboring houses, and NADA.  Things have changed.  Middle aged successful commuters in Winnetka now get their news from their iPhones.  Par taught me how to activate Google news on my iPhone to get news about things I'm interested in.  The more I Google "Trump and National Emergency"  the more I will get articles pertaining to that subject. 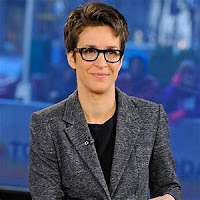 I watch MSNBC - specifically Rachel Maddow whenever I can.  I feel I learn so much from her, not just about current events, but also about history.  ...But it's really the news that I want to hear;  it's the news that I already agree with.  I suppose even reading the Wall Street Journal or the NY Times gives a certain bias, and it behooves all of us Democrats to watch Fox news from time to time while Republicans tune in to Rachel Maddow!  If we're not open to disparate beliefs then we will be constantly feeding our own biases and the polarization will only increase.

I think the thing that disturbs me the most about this discussion is that it leads me to ponder where news comes from, how reliable it is, and how selective it is.

Where does it come from?  We read the SF Chronicle who is paring its staff way down so that, other than local news, most of its stories come from the wires.  I haven't a clue where news comes from for the myriads of people on the internet who get their news from social media sites - Russia is a good bet these days!

How reliable is it?  I used to believe everything I read which probably wasn't a great policy, but it didn't often get me into trouble.  Nowadays Trump has made Fake News an everyday reality.  If we hear something we don't believe in, we assume it's been "Trumped up!"

How selective is it?  Rachel Maddow seems to ONLY talk about things that are Trump-related.  We hear about big earthquakes around the world or young boys stranded in a cave in Thailand- but what are we missing?  We don't decide what news we read about unless we are specifically interested in albino alligators and Google it.  The headlines are written for us, so when someone asks me, "What's in the news today?" I reply with what I saw on my Yahoo feed or heard on NPR.

It seems we are all being manipulated;  maybe we always have been.  But with a very important election coming up, I need to find a way to get reliable, unbiased, accurate facts about people and policies.  It was Thomas Jefferson who said, "A well informed citizenry is the best defense against tyranny."  If anyone out there has any ideas how I can become better informed, I'm all ears.

Posted by nanwebware at 7:20 PM