When I dislocated my hip three weeks ago, one of the first things I said to Loren as I was writhing in pain on the kitchen floor was, "I'm going to Mexico!"  Nothing was going to stop me, as, after only one full day here, I know why.  It's just glorious!  Fabulous people, amazing food, impeccable weather and invigorating conversation.  I am calling it my "Cuernavaca Rehab Center" and it's better tonic than any doctor could have prescribed!

We were given what Fred refers to "the bridal suite" although "that's putting the cart before the horse," he was quick to remind us!  I retorted that "Sorry Fred, but that horse is already out of the barn!"  Here is a panoramic view of our bedroom: 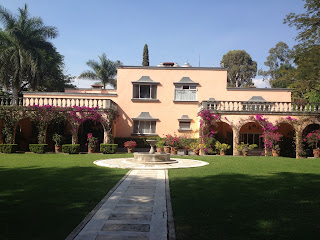 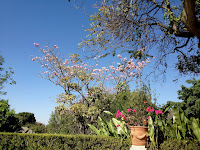 And lest you forgot... here is what we are calling "home" for the next month!


Our political talk has been almost nonexistent.  We only get Fox News here on TV which is so awful that we haven't been watching it.  We'll get an occasional update from someone who saw that Nancy Pelosi talked for over 8 hours in 4-inch heels, but then we all seem to shrug and continue on with other conversations.  Some of the topics so far have included a recounting of hiking up Mt. Kilimanjaro, a two-week walking tour from the east coast of England to the west coast, Ruppert Murdoch, the quirkiness of birding, a lot about the political and art scenes of Chicago and many more.  The "book table" contains a wide variety:  Donna Leon's latest detective story from Venice, a number of Economists, The Elements of Typographic Style, Blue Zones by Dan Buettner, and Architectural Digest.

There is a lovely American couple who live next door.  Gail and Phil George have an incredible house that was once in Architectural Digest and that Fred and Kat had rented for two years.  Gail & Phil invited us all over for cocktails on Wednesday afternoon.  I wish I had some pictures to show you as the home is indescribable.  It was really fun for me, as it brought back many memories of when we had stayed there.  The house is modern with an overall white motif.  But the artwork, furnishings, and murals are astounding.  Phil had been in the CIA before becoming an architect himself.  He created the design for the old Braniff Airlines terminal.  Gail is a gracious and energetic host, and Sergio, a key member of their staff, makes killer margaritas!  We had a lovely time and returned home just in time for Gilberto to announce that dinner was "listo." 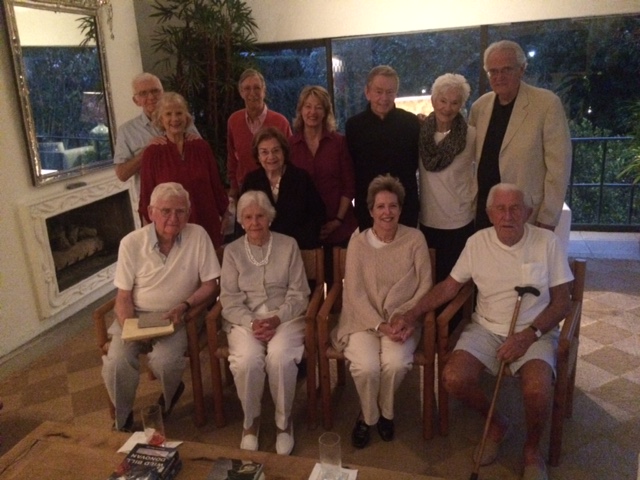 Fred and Kat Hickman, Gail and Phil George sitting in the front row with the Hickman guests behind.

One couple, Judy and Lester, have made a tradition of bringing something for the group to read in preparation for a collective discussion.  One year they brought Thurber's Secret Life of Walter Mitty, another year it was a Garrison Keillor piece.  This year, for some reason, they decided to challenge us with a section of a book called Aging Thoughtfully by two very erudite professors from the University of Chicago.  The piece they selected for us was Aging and Friendship written by Martha C. Nussbaum, a doctor of philosophy.  She crafts her thoughts around a large collection of letters written between Cicero and his friend Atticus.  Lester opened our discussion asking us if we wanted to emphasize form or function.  I was already out of my element.  We were a little shaky with the Cicero/Atticus conversation, but there were some wonderful exchanges about friendship and aging when we allowed ourselves to get personal:  The older one gets, the more important friendship is;  there needs to be some shared values but differences can strengthen friendship; the ultimate friendship involving trust and forgiveness is found in a marriage;  our culture tends to make older people feel invisible;  some were reluctant to reveal their age in public fearing they would be dismissed as not having anything to contribute.  It was also revealed that having obvious physical difficulties like walking made one constantly being helped and aided without being asked when in fact we'd really like to do most things ourselves and keep our independence even if it might be at a slower pace.  The discussion ended after dinner while we were all having coffee in the salon.  Judy quoted Cato from our handout:  "Old age is honored only on condition that it defends itself, maintains its rights, is subservient to no one, and to the last breath rules over its own domain."   She then continued to say how the assembled group perfectly exemplified this quote.  Fred and Kat have the most incredible social network around them that they have nurtured over many years;  we were active people traveling, volunteering, getting involved in civic and art programs, painting, singing, attending classes and in so many ways staying alive and well.  We ranged in age from 70-90 and we decided, at least for our short stay in Cuernavaca, we weren't old!

Posted by nanwebware at 4:56 AM

I am reading! Love the discussion on aging. Are there no 'introverts' in your group? That term has become so overused, but for some of us, making/keeping those social connections is harder than for others. I understand how important it is but at my age ~ I find it difficult; although I go out and about, and speak to folks in my yoga class, for example, or the library, I don't invite them to go for coffee. One reason I'd consider a CCRC eventually...people around.

Keep posting, and exercising body as well as brain! Ciao!

Dear sis, I just LOVE your reports from Cuernavaca. How bright, conscious, broad-eyed, curious and sincerely interested person you are! (I can think of many adjetives to add, but will stop for now). You are also the most compassionate and giving person I know. I love where your mind is going and hope you can provide a lot more subjects to our reflexion. Enjoy your stay and say hello to all there. Keep up your postings, please.